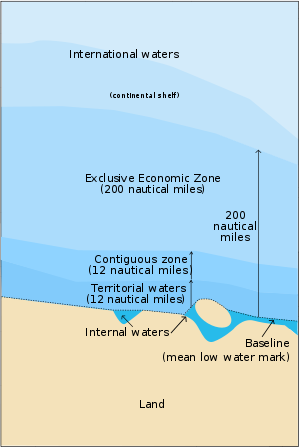 The term "territorial waters" is also sometimes used informally to describe any area of water over which a state has jurisdiction
Jurisdiction
Jurisdiction is the practical authority granted to a formally constituted legal body or to a political leader to deal with and make pronouncements on legal matters and, by implication, to administer justice within a defined area of responsibility...
, including internal waters
Internal waters
A nation's internal waters covers all water and waterways on the landward side of the baseline from which a nation's territorial waters is defined. It includes waterways such as rivers and canals, and sometimes the water within small bays. According to the United Nations Convention on the Law of...
, the contiguous zone, the exclusive economic zone
Exclusive Economic Zone
Under the law of the sea, an exclusive economic zone is a seazone over which a state has special rights over the exploration and use of marine resources, including production of energy from water and wind. It stretches from the seaward edge of the state's territorial sea out to 200 nautical...
and potentially the continental shelf
Continental shelf
The continental shelf is the extended perimeter of each continent and associated coastal plain. Much of the shelf was exposed during glacial periods, but is now submerged under relatively shallow seas and gulfs, and was similarly submerged during other interglacial periods. The continental margin,...
.

Normally, the baseline from which the territorial sea is measured is the low-water line along the coast as marked on large-scale charts officially recognized by the coastal state. This is either the low-water mark closest to the shore, or alternatively it may be an unlimited distance from permanently exposed land, provided that some portion of elevations exposed at low tide but covered at high tide (like mud flats) is within 12 nautical miles (22.2 km) of permanently exposed land. Straight baselines can alternatively be defined connecting fringing islands along a coast, across the mouths of rivers, or with certain restrictions across the mouths of bays. In this case, a bay is defined as "a well-marked indentation whose penetration is in such proportion to the width of its mouth as to contain land-locked waters and constitute more than a mere curvature of the coast. An indentation shall not, however, be regarded as a bay unless its area is as large as, or larger than, that of the semi-circle whose diameter is a line drawn across the mouth of that indentation". The baseline across the bay must also be no more than 24 nautical miles (44.4 km) in length. 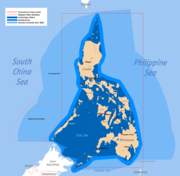 Waters landward of the baseline are defined as internal waters
Internal waters
A nation's internal waters covers all water and waterways on the landward side of the baseline from which a nation's territorial waters is defined. It includes waterways such as rivers and canals, and sometimes the water within small bays. According to the United Nations Convention on the Law of...
, over which the state has complete jurisdiction: not even innocent passage is allowed. Lakes and rivers are considered internal waters, as are all "archipelagic waters" within the outermost islands of an archipelagic state such as Indonesia
Indonesia
Indonesia , officially the Republic of Indonesia , is a country in Southeast Asia and Oceania. Indonesia is an archipelago comprising approximately 13,000 islands. It has 33 provinces with over 238 million people, and is the world's fourth most populous country. Indonesia is a republic, with an...
, Japan
Japan
Japan is an island nation in East Asia. Located in the Pacific Ocean, it lies to the east of the Sea of Japan, China, North Korea, South Korea and Russia, stretching from the Sea of Okhotsk in the north to the East China Sea and Taiwan in the south...
or the Philippines
Philippines
The Philippines , officially known as the Republic of the Philippines , is a country in Southeast Asia in the western Pacific Ocean. To its north across the Luzon Strait lies Taiwan. West across the South China Sea sits Vietnam...
.

The contiguous zone is a band of water extending from the outer edge of the territorial sea to up to 24 nautical miles (44.4 km) from the baseline, within which a state can exert limited control for the purpose of preventing or punishing "infringement of its customs, fiscal, immigration or sanitary laws and regulations within its territory or territorial sea". This will typically be 12 nautical miles (22.2 km) wide, but could be more (if a state has chosen to claim a territorial sea of less than 12 nautical miles), or less, if it would otherwise overlap another state's contiguous zone. However, unlike the territorial sea there is no standard rule for resolving such conflicts, and the states in question must negotiate their own compromise. The United States
United States
The United States of America is a federal constitutional republic comprising fifty states and a federal district...
invoked a contiguous zone out to 24 nm on 24 September 1999.

Countries were supposed to lodge their submissions to extend their continental shelf beyond 200 nautical miles within ten years of UNCLOS coming into force in the country, or by 13 May 2009 for countries where the convention had come into force before 13 May 1999. As of 1 June 2009, 51 submissions have been lodged with the Commission, of which eight have been deliberated by the Commission and have had recommendations issued. The eight are (in the order of date of submission): Russian Federation; Brazil; Australia; Ireland; New Zealand; the joint submission by France, Ireland, Spain and the United Kingdom; Norway and Mexico.


Rights over the continental shelf

Articles 77 to 81 define the rights of a country over its continental shelf.

A coastal nation has control of all resources on or under its continental shelf, living or not, but no control over any living organisms above the shelf that are beyond its exclusive economic zone. This gives it the right to conduct petroleum drilling works and lay submarine cables or pipelines in its continental shelf.

From the eighteenth century until the mid twentieth century, the territorial waters of the British Empire
British Empire
The British Empire comprised the dominions, colonies, protectorates, mandates and other territories ruled or administered by the United Kingdom. It originated with the overseas colonies and trading posts established by England in the late 16th and early 17th centuries. At its height, it was the...
, the United States
United States
The United States of America is a federal constitutional republic comprising fifty states and a federal district...
, France
France
The French Republic , The French Republic , The French Republic , (commonly known as France , is a unitary semi-presidential republic in Western Europe with several overseas territories and islands located on other continents and in the Indian, Pacific, and Atlantic oceans. Metropolitan France...
and many other nations were three nautical miles (5.6 km) wide
Three-mile limit
The three-mile limit refers to a traditional and now largely obsolete conception of the international law of the seas which defined a country's territorial waters, for the purposes of trade regulation and exclusivity, as extending as far as the reach of cannons fired from land.In Mare clausum John...
. Originally, this was the length of a cannon
Cannon
A cannon is any piece of artillery that uses gunpowder or other usually explosive-based propellents to launch a projectile. Cannon vary in caliber, range, mobility, rate of fire, angle of fire, and firepower; different forms of cannon combine and balance these attributes in varying degrees,...
shot, hence the portion of an ocean that a sovereign state could defend from shore. However, Iceland
Iceland
Iceland , described as the Republic of Iceland, is a Nordic and European island country in the North Atlantic Ocean, on the Mid-Atlantic Ridge. Iceland also refers to the main island of the country, which contains almost all the population and almost all the land area. The country has a population...
claimed two nautical miles (3.7 km), Norway
Norway
Norway , officially the Kingdom of Norway, is a Nordic unitary constitutional monarchy whose territory comprises the western portion of the Scandinavian Peninsula, Jan Mayen, and the Arctic archipelago of Svalbard and Bouvet Island. Norway has a total area of and a population of about 4.9 million...
and Sweden
Sweden
Sweden , officially the Kingdom of Sweden , is a Nordic country on the Scandinavian Peninsula in Northern Europe. Sweden borders with Norway and Finland and is connected to Denmark by a bridge-tunnel across the Öresund....
claimed four nautical miles (7.4 km), and Spain
Spain
Spain , officially the Kingdom of Spain languages]] under the European Charter for Regional or Minority Languages. In each of these, Spain's official name is as follows:;;;;;;), is a country and member state of the European Union located in southwestern Europe on the Iberian Peninsula...
claimed 6 nautical miles (11.1 km) during this period. During incidents such as nuclear weapons testing and fisheries disputes some nations arbitrarily extended their maritime claims to as much as fifty or even two hundred nautical miles. Since the late 20th century the "12 mile limit" has become almost universally accepted. The United Kingdom
United Kingdom
The United Kingdom of Great Britain and Northern IrelandIn the United Kingdom and Dependencies, other languages have been officially recognised as legitimate autochthonous languages under the European Charter for Regional or Minority Languages...
extended its territorial waters from three to twelve nautical miles (22 km) in 1987.

The second proclamation was titled "Policy of the United States With Respect to Coastal Fisheries in Certain Areas of the High Seas", and stated in its operative clause:


the Government of the United States regards it as proper to establish conservation zones in those areas of the high seas contiguous to the coasts of the United States wherein fishing activities have been or in the future may be developed and maintained on a substantial scale.

Pirate radio
Pirate radio
Pirate radio is illegal or unregulated radio transmission. The term is most commonly used to describe illegal broadcasting for entertainment or political purposes, but is also sometimes used for illegal two-way radio operation...
broadcasting from artificial marine fixtures or anchored ships can be controlled by the affected coastal nation or other nations wherever that broadcast may originate, whether in the territorial sea, exclusive economic zone, the continental shelf or even on the high seas.

Throughout this article, distances measured in nautical miles are exact legal definitions, while those in kilometres are approximate conversions that are not stated in any law or treaty.

Federal nations, such as the United States, divide control over certain waters between the federal government and the individual states. (See tidelands
Tidelands
Tidelands are the territory between the high and low water tide line of sea coasts, and lands lying under the sea beyond the low-water limit of the tide, considered within the territorial waters of a nation. The United States Constitution does not specify whether ownership of these lands rests with...
.)


Maritime controversies involve two dimensions: (a) territorial sovereignty, which are a legacy of history; and (b) relevant jurisdictional rights and interests in maritime boundaries
Maritime boundary
Maritime boundary is a conceptual means of division of the water surface of the planet into maritime areas that are defined through surrounding physical geography or by human geography. As such it usually includes areas of exclusive national rights over the mineral and biological resources,...
, which are mainly due to differing interpretations of the law of the sea.

List with date of submission and adoption of recommendation by the Commission on the Limits of the Continental Shelf.