Stellenbosch University designed and manufactured Africa's first microsatellite, SUNSAT
SUNSAT
The Stellenbosch UNiversity SATellite is the first miniaturized satellite designed and manufactured in South Africa. It was launched aboard a Delta II rocket from the Vandenberg Air Force Base on 23 February 1999. Sunsat was built by post-graduate engineering students at the University of...
, launched in 1999.

The origin of the university can be traced back to the Stellenbosch Gymnasium, which was opened on 1 March 1866 , which became the Stellenbosch College in 1881 and which was located at the current Arts Department. In 1887 this college was renamed Victoria
Victoria of the United Kingdom
Victoria was the monarch of the United Kingdom of Great Britain and Ireland from 20 June 1837 until her death. From 1 May 1876, she used the additional title of Empress of India....
College; when it acquired university status on 2 April 1918 it was renamed once again - to Stellenbosch University. In 1966, the University was visited by Robert F. Kennedy
Robert F. Kennedy
Robert Francis "Bobby" Kennedy , also referred to by his initials RFK, was an American politician, a Democratic senator from New York, and a noted civil rights activist. An icon of modern American liberalism and member of the Kennedy family, he was a younger brother of President John F...
.

According to the QS World University Ranking 2011/12, SU ranked in the 401-450 category in the world. In terms of this ranking SU is 3rd in South Africa.

According to the Times Higher Education World University Rankings 2011/12, SU ranked in the 251-275 category in the world. In terms of this ranking SU is second in South Africa.

According to the University of Leiden’s ranking, SU ranked 454th out of the top 500 universities worldwide in terms of international publication output and 415th in terms of the impact of citations from SU scientific publications in 2007. This is one of the
most reliable rankings in respect of research but it does not attempt to rank universities in a comprehensive sense. 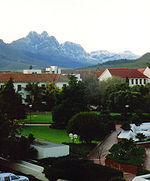 Stellenbosch, South Africa's oldest town after Cape Town, is a university town with a population of about 90,000 (excluding students). It is located about 50 kilometres from Cape Town and is situated on the banks of the Eersterivier ("First River") in the famous wine-growing region and is encircled by picturesque mountains. Teaching at Stellenbosch University is divided between the main Stellenbosch campus, the Tygerberg campus, where the Faculty of Health Sciences is situated, the Bellville Park campus, where the graduate School of Business is, and the Saldanha
Saldanha Bay
Saldanha Bay is a natural harbour on the south-western coast of South Africa, north west of Cape Town. The town that developed on the northern shore of the bay, also called Saldanha, was incorporated with five other towns into the Saldanha Bay Local Municipality in 2000. The current population of...
campus, housing the Faculty of Military Science at the Military Academy of the South African National Defence Force.

Stellenbosch University is a predominantly Afrikaans
Afrikaans
Afrikaans is a West Germanic language, spoken natively in South Africa and Namibia. It is a daughter language of Dutch, originating in its 17th century dialects, collectively referred to as Cape Dutch .Afrikaans is a daughter language of Dutch; see , , , , , .Afrikaans was historically called Cape...
medium university, especially at undergraduate and honours course level. However, students are allowed to write their assignments, tests and examinations in both English and Afrikaans. The language of tuition also varies depending on the faculty, with the Arts faculty for example being 40% English, most if not all courses are lectured bilingually and the language of most handouts or prescribed material is determined by the student.

The language policy is still an ongoing issue for the University, since it is one of the very few tertiary institutions left in South Africa offering tuition in Afrikaans. Because of this, it is held in very high regard by the Afrikaner community, with the university even being considered a central pillar of Afrikaner life.

Stellenbosch University consists of about 150 departments divided amongst 10 faculties
Faculty (university)
A faculty is a division within a university comprising one subject area, or a number of related subject areas...
. It also has more than 40 research (and other) institutions.

The faculties that are situated on the main campus are:

The faculties and schools that are not situated on the main campus are:

The J.S. Gericke Library, is notable for being subterranean, on two levels, and occupying a surface area equivalent to two and half rugby fields. The library has collections scattered around the campus outside of the main facility, and all of which are catalogued on a computerised database, using the university's original mainframe, a UNIVAC
UNIVAC
UNIVAC is the name of a business unit and division of the Remington Rand company formed by the 1950 purchase of the Eckert-Mauchly Computer Corporation, founded four years earlier by ENIAC inventors J. Presper Eckert and John Mauchly, and the associated line of computers which continues to this day...
. There are several other satellite libraries servicing the different faculties, including the Theology Library, Law Library and Tygerberg Medical Library.

The university also has a 430 seater theatre, known as the H.B. Thom Theatre and an open air amphitheatre. Accompanying these facilities is the university's own drama department, under the guidance of the Faculty of Arts and Social Sciences. The department regularly puts on plays, dramas, productions, cabarets and musicals.

The Langenhoven
Cornelis Jacobus Langenhoven
Cornelis Jacobus Langenhoven , wrote under the pen name C.J. Langenhoven and was better known as Sagmoedige Neelsie or Kerneels. He had a formidable role in South Africa's Afrikaans literature and cultural history, and was one of the young language's foremost promoters...
Students' Centre (Neelsie) houses the Student Representative Council, a food court, a cinema, a post office, a shopping centre, an advice office and all the student societies' offices. Student bands and various entertainment and activity promotions usually appear in the main food court during lunch hour.

The university also distributes regular publications, Die Matie
Die Matie
Die Matie is a student newspaper at the University of Stellenbosch. Founded in 1941, Die Matie is published every two weeks during the academic year. The editorial content includes sections on news, student life, sport, arts and entertainment, current affairs and news from other campuses...
(appearing every fortnight), for its students and Kampusnuus (appearing monthly) for its staff. An official yearbook, Die Stellenbosch Student, is published annually and presented to all graduating students. Matieland is the name of the official alumni magazine. It is published twice a year and distributed to some 100 000 alumni and friends of the University.

Sports facilities for the more than 30 competitive and recreational sports that are supported by the university include two sport stadiums, two large swimming pools (one under roof), the D.F. Malan Center, a multi-purpose center for ceremonies and indoor sports, numerous playing fields, including a hockey field, a gymnasium and a new football complex.
The university offers the following sports to its students:


Stellenbosch has served as a test site in 2006 for a set of proposed modifications to the rules of rugby union
Rugby union
Rugby union, often simply referred to as rugby, is a full contact team sport which originated in England in the early 19th century. One of the two codes of rugby football, it is based on running with the ball in hand...
, commonly referred to as the Stellenbosch Laws.

The university has various residences
Dormitory
A dormitory, often shortened to dorm, in the United States is a residence hall consisting of sleeping quarters or entire buildings primarily providing sleeping and residential quarters for large numbers of people, often boarding school, college or university students...
, or koshuise (Afrikaans
Afrikaans
Afrikaans is a West Germanic language, spoken natively in South Africa and Namibia. It is a daughter language of Dutch, originating in its 17th century dialects, collectively referred to as Cape Dutch .Afrikaans is a daughter language of Dutch; see , , , , , .Afrikaans was historically called Cape...
for residence halls).

Students in private lodgings can become a member of the Private Students' Organisation (PSO), also known as Private Wards. There were previously 6 PSO wards until 8 October 2008, when four new PSO wards were commissioned. Students are assigned to the various wards through a system of random allocation. Private Wards allow students to enjoy all the same functions, from academic support to sport opportunities, as a Residence provides, while the student remains in their private lodging.
Men's Residences