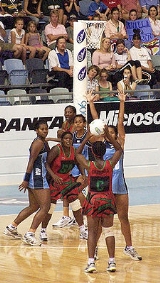 Games are played on a rectangular court with raised goal rings at each end.

What action would be taken if a game of netball is stopped due to heavy rain which took over 12 hours?

Name at least three players that were on the team the year trinidad and tobago were partial winners - 1979?