Encyclopedia
Stargard Szczeciński AUD is a city
City
A city is a relatively large and permanent settlement. Although there is no agreement on how a city is distinguished from a town within general English language meanings, many cities have a particular administrative, legal, or historical status based on local law.For example, in the U.S...
in northwestern Poland
Poland
Poland , officially the Republic of Poland , is a country in Central Europe bordered by Germany to the west; the Czech Republic and Slovakia to the south; Ukraine, Belarus and Lithuania to the east; and the Baltic Sea and Kaliningrad Oblast, a Russian exclave, to the north...
, with a population of 71,017 (2005). Situated on the Ina River
Ina River
The Ina is a river in northwestern Poland, a right tributary of the Oder River.The origins of the river are in Insko Lake , and it flows through a succession of smaller lakes. A confluence of Ina River is localized in Police, Poland town...
it is the capital of Stargard County
Stargard County
Stargard County is a unit of territorial administration and local government in West Pomeranian Voivodeship, north-western Poland. It came into being on January 1, 1999, as a result of the Polish local government reforms passed in 1998. Its administrative seat and largest town is Stargard...
and since 1999 has been in the West Pomeranian Voivodeship
West Pomeranian Voivodeship
West Pomeranian Voivodeship, , is a voivodeship in northwestern Poland. It borders on Pomeranian Voivodeship to the east, Greater Poland Voivodeship to the southeast, Lubusz Voivodeship to the south, the German federal-state of Mecklenburg-West Pomerania to the west, and the Baltic Sea to the north...
; prior to that it was in the Szczecin Voivodeship
Szczecin Voivodeship
Szczecin Voivodeship was a unit of administrative division and local government in Poland in the years 1975–1998, superseded by West Pomeranian Voivodeship.----Statistics :*Area: 10.000 km²...
(1975–1998). Stargard is a major railroad junction, where the southwards connection from Szczecin
Szczecin
Szczecin , is the capital city of the West Pomeranian Voivodeship in Poland. It is the country's seventh-largest city and the largest seaport in Poland on the Baltic Sea. As of June 2009 the population was 406,427....
splits into two directions - one towards Poznań
Poznan
Poznań is a city on the Warta river in west-central Poland, with a population of 556,022 in June 2009. It is among the oldest cities in Poland, and was one of the most important centres in the early Polish state, whose first rulers were buried at Poznań's cathedral. It is sometimes claimed to be...
and the other towards Gdańsk
Gdansk
Gdańsk is a Polish city on the Baltic coast, at the centre of the country's fourth-largest metropolitan area.The city lies on the southern edge of Gdańsk Bay , in a conurbation with the city of Gdynia, spa town of Sopot, and suburban communities, which together form a metropolitan area called the...
. There is also another minor line to Pyrzyce
Pyrzyce
Pyrzyce , is a town in Pomerania, north-western Poland, with 13,331 inhabitants Capital of the Pyrzyce County in West Pomeranian Voivodeship , previously in Szczecin Voivodeship .-History:...
from the town.

In 1363 the city joined the Hanseatic League
Hanseatic League
The Hanseatic League was an economic alliance of trading cities and their merchant guilds that dominated trade along the coast of Northern Europe...
and was then strongly fortified. During the 15th century the Pomeranian dukes chose it as their residence.

During the Thirty Years' War
Thirty Years' War
The Thirty Years' War was fought primarily in what is now Germany, and at various points involved most countries in Europe. It was one of the most destructive conflicts in European history....
the city burnt down and in the 1648 Peace of Westphalia
Peace of Westphalia
The Peace of Westphalia was a series of peace treaties signed between May and October of 1648 in Osnabrück and Münster. These treaties ended the Thirty Years' War in the Holy Roman Empire, and the Eighty Years' War between Spain and the Dutch Republic, with Spain formally recognizing the...
it was incorporated, together with the rest of Further Pomerania, into Brandenburg-Prussia
Brandenburg-Prussia
Brandenburg-Prussia is the historiographic denomination for the Early Modern realm of the Brandenburgian Hohenzollerns between 1618 and 1701. Based in the Electorate of Brandenburg, the main branch of the Hohenzollern intermarried with the branch ruling the Duchy of Prussia, and secured succession...
. In 1701 Stargard became part of the Kingdom of Prussia
Kingdom of Prussia
The Kingdom of Prussia was a German kingdom from 1701 to 1918. Until the defeat of Germany in World War I, it comprised almost two-thirds of the area of the German Empire...
and in 1818, after the Napoleonic Wars
Napoleonic Wars
The Napoleonic Wars were a series of wars declared against Napoleon's French Empire by opposing coalitions that ran from 1803 to 1815. As a continuation of the wars sparked by the French Revolution of 1789, they revolutionised European armies and played out on an unprecedented scale, mainly due to...
, Stargard became part of the new district Saatzig within the Province of Pomerania.

As a result of the unification of Germany
Unification of Germany
The formal unification of Germany into a politically and administratively integrated nation state officially occurred on 18 January 1871 at the Versailles Palace's Hall of Mirrors in France. Princes of the German states gathered there to proclaim Wilhelm of Prussia as Emperor Wilhelm of the German...
in 1871 the city became part of the German Empire
German Empire
The German Empire refers to Germany during the "Second Reich" period from the unification of Germany and proclamation of Wilhelm I as German Emperor on 18 January 1871, to 1918, when it became a federal republic after defeat in World War I and the abdication of the Emperor, Wilhelm II.The German...
. On 1 April 1901 it became an independent city
Independent city
An independent city is a city that does not form part of another general-purpose local government entity. These type of cities should not be confused with city-states , which are fully sovereign cities that are not part of any other sovereign state.-Historical precursors:In the Holy Roman Empire,...
, separate from the Saatzig District.

During World War II
World War II
World War II, or the Second World War , was a global conflict lasting from 1939 to 1945, involving most of the world's nations—including all of the great powers—eventually forming two opposing military alliances: the Allies and the Axis...
the large prisoner-of-war camp
Prisoner-of-war camp
A prisoner-of-war camp is a site for the containment of combatants captured by their enemy in time of war, and is similar to an internment camp which is used for civilian populations. A prisoner of war is generally a soldier, sailor, or airman who is imprisoned by an enemy power during or...
Stalag II-D
Stalag II-D
Stalag II-D Stargard was a World War II German Army Prisoner-of-war camp located near Stargard, Pomerania , about east of Stettin .- Camp history:...
was located near Stargard. There were Kashubians
Kashubians
Kashubians/Kaszubians , also called Kashubs, Kashubes, Kaszubians, Kassubians or Cassubians, are a West Slavic ethnic group in Pomerelia, north-central Poland. Their settlement area is referred to as Kashubia ....
and later thousands of Canadians
Canada
Canada is a North American country consisting of ten provinces and three territories. Located in the northern part of the continent, it extends from the Atlantic Ocean in the east to the Pacific Ocean in the west, and northward into the Arctic Ocean...
captured at Dieppe
Dieppe Raid
The Dieppe Raid, also known as the Battle of Dieppe, Operation Rutter or later on Operation Jubilee, during the Second World War, was an Allied attack on the German-occupied port of Dieppe on the northern coast of France on 19 August 1942. The assault began at 5:00 AM and by 10:50 AM the Allied...
imprisoned there, one of whom was Gerald MacIntosh Johnston
Gerald MacIntosh Johnston
Actor Gerald MacIntosh Johnston , known professionally as Gerald Kent, was a Canadian Broadway stage and film actor who was captured at the Dieppe Raid during the Second World War and died in a German POW camp....
, a Canadian actor, who was killed trying to escape.

In 1945 the city was placed under Polish administration, according to the postwar Potsdam Agreement
Potsdam Agreement
The Potsdam Agreement was the Allied plan of tripartite military occupation and reconstruction of Germany—referring to the German Reich with its pre-war 1937 borders including the former eastern territories—and the entire European Theatre of War territory...
, and since then has remained part of Poland. The German
Germans
The Germans are a Germanic ethnic group native to Central Europe. The English term Germans has referred to the German-speaking population of the Holy Roman Empire since the Late Middle Ages....
population was expelled
Expulsion of Germans after World War II
The later stages of World War II, and the period after the end of that war, saw the forced migration of millions of German nationals and ethnic Germans from various European states and territories, mostly into the areas which would become post-war Germany and post-war Austria...
and replaced by Poles
Poles
thumb|right|180px|The state flag of [[Poland]] as used by Polish government and diplomatic authoritiesThe Polish people, or Poles , are a nation indigenous to Poland. They are united by the Polish language, which belongs to the historical Lechitic subgroup of West Slavic languages of Central Europe...
, mainly from the eastern Polish areas annexed by the Soviet Union
Polish areas annexed by the Soviet Union
Immediately after the German invasion of Poland in 1939, which marked the beginning of World War II, the Soviet Union invaded the eastern regions of the Second Polish Republic, which Poles referred to as the "Kresy," and annexed territories totaling 201,015 km² with a population of 13,299,000...
.


Until 1998 southeast of Stargard Szczeciński, there was a facility for mediumwave broadcasting at 15°7'E and 53°18'N used for foreign broadcasting on 1503 kHz with 300 kW. The two antenna towers of the facility are meanwhile dismantled.

Before World War II the population of Stargard in Pommern was predominantly composed of Protestants. 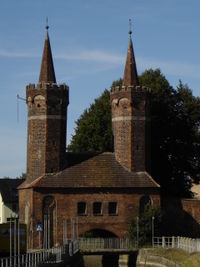 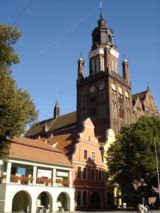 Stargard Szczeciński is twinned
Town twinning
Twin towns and sister cities are two of many terms used to describe the cooperative agreements between towns, cities, and even counties in geographically and politically distinct areas to promote cultural and commercial ties.- Terminology :...
with: