Son of Duke Bogislaw II and Miroslawa, daughter of Duke Mestwin I of Pomerelia, he succeeded to the Duchy of Pomerania-Stettin upon his father's death in 1220; he had however to share the rule of Pomerania with his cousin Wartislaw III
Wartislaw III, Duke of Pomerania
Wartislaw III was a Griffin duke of Pomerania-Demmin. Son of Casimir II of Pomerania-Demmin and Ingardis of Denmark, he was married to a Sophia of an unknown house. As he did not have any children, Pomerania-Demmin ceased to exist with his death.Ingardis ruled Pomerania-Demmin in place of young...
, who resided at Demmin
Demmin
Demmin is a town in the Mecklenburgische Seenplatte district, Mecklenburg-Western Pomerania, Germany. It was the capital of the former district Demmin.- Name :...
. A minor when his father died, his lands until about 1226 were under regency of his mother Miroslawa from the Pomerelian Samborides
Samborides
The Samborides or House of Sobiesław were a ruling dynasty in the historic region of Pomerania. They were first documented about 1155 as governors in the eastern Pomerelian lands serving the royal Piast dynasty of Poland, and from 1227 ruled as autonomous princes until 1294, at which time the...
dynasty. At first still a Danish
Kingdom of Denmark
The Kingdom of Denmark or the Danish Realm , is a constitutional monarchy and sovereign state consisting of Denmark proper in northern Europe and two autonomous constituent countries, the Faroe Islands in the North Atlantic and Greenland in North America. Denmark is the hegemonial part, where the...
fief, the Pomeranian lands fell back to the Holy Roman Empire
Holy Roman Empire
The Holy Roman Empire was a realm that existed from 962 to 1806 in Central Europe.It was ruled by the Holy Roman Emperor. Its character changed during the Middle Ages and the Early Modern period, when the power of the emperor gradually weakened in favour of the princes...
after the victory of several North-German princes at the 1227 Battle of Bornhöved
Battle of Bornhöved (1227)
The Battle of Bornhöved took place on 22 July 1227 near Bornhöved in Holstein. Count Adolf IV of Schauenburg and Holstein — leading an army consisting of troops from the cities of Lübeck and Hamburg, about 1000 Dithmarsians and combined troops of Holstein next to various north German nobles —...
. Emperor Frederick II of Hohenstufen
Frederick II, Holy Roman Emperor
Frederick II , was one of the most powerful Holy Roman Emperors of the Middle Ages and head of the House of Hohenstaufen. His political and cultural ambitions, based in Sicily and stretching through Italy to Germany, and even to Jerusalem, were enormous...
in 1231 put the Duchy of Pomerania under the suzerainty of the Ascanian margraves of Brandenburg
Margraviate of Brandenburg
The Margraviate of Brandenburg was a major principality of the Holy Roman Empire from 1157 to 1806. Also known as the March of Brandenburg , it played a pivotal role in the history of Germany and Central Europe....
, disregarding the tenure of the Griffin dynasty and thereby fueling the long-term Brandenburg–Pomeranian conflict. 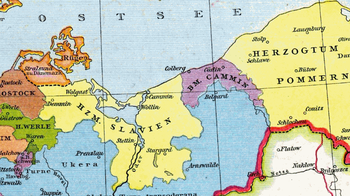 After his cousin Wartislaw III had formally accepted the Brandenburg overlordship by the 1236 Treaty of Kremmen
Treaty of Kremmen
The Treaty of Kremmen was signed in Kremmen, Germany, on June 20, 1236. Wartislaw III of Pomerania-Demmin had to recognize the Margraviate of Brandenburg's overlordship over the remainder of his duchy, and ceded the terrae Stargard, Wustrow and Beseritz to Brandenburg.-References:...
, Duke Barnim I came to terms with the mighty Ascanian margraves in the 1250 Treaty of Landin
Treaty of Landin
The Treaty of Landin was signed in Landin, Germany in 1250 between Barnim I of Pomerania-Stettin, the Ascanian margraves Johann I and Otto III of Brandenburg. Barnim I was accepted as co-ruler of Wartislaw III of Pomerania-Demmin by the Margraviate of Brandenburg, thereby hindering Brandenburg's...
: he confessed himself a Brandenburg vassal and had to renounce the Uckermark
Uckermark
Uckermark is a Kreis in the northeastern part of Brandenburg, Germany. Neighboring districts are Barnim and Oberhavel, the districts Mecklenburgische Seenplatte and Vorpommern-Greifswald in Mecklenburg-Vorpommern, and to the east Poland . It is the largest district of Germany areawise...
region, nevertheless he reached the consent, that the fief of his cousin Wartislaw would remain with the Griffin dynasty upon his death. When Duke Wartislaw III died in 1264, Barnim I was able to unite the whole Duchy of Pomerania under his rule. He promoted the Ostsiedlung
Ostsiedlung
Ostsiedlung , also called German eastward expansion, was the medieval eastward migration and settlement of Germans from modern day western and central Germany into less-populated regions and countries of eastern Central Europe and Eastern Europe. The affected area roughly stretched from Slovenia...
by introducing German
Germans
The Germans are a Germanic ethnic group native to Central Europe. The English term Germans has referred to the German-speaking population of the Holy Roman Empire since the Late Middle Ages....
settlers and customs into the duchy, established many towns
German town law
German town law or German municipal concerns concerns town privileges used by many cities, towns, and villages throughout Central and Eastern Europe during the Middle Ages.- Town law in Germany :...
, among them Prenzlau
Prenzlau
Prenzlau , a city in the Uckermark District of Brandenburg in Germany, had a population of about 21,000 in 2005.-International relations:Prenzlau is twinned with: Uster, Switzerland Barlinek, Poland Świdwin, Poland...
, Szczecin
Szczecin
Szczecin , is the capital city of the West Pomeranian Voivodeship in Poland. It is the country's seventh-largest city and the largest seaport in Poland on the Baltic Sea. As of June 2009 the population was 406,427....
, Gartz
Gartz
Gartz is a town in the Uckermark district in Brandenburg, Germany. It is located on the West bank of the Oder River, about 30 km south of Szczecin .-Overview:...
, Anklam
Anklam
Anklam is a town in the Western Pomerania region of Mecklenburg-Vorpommern, Germany. It is situated on the banks of the Peene river, just 8 km from its mouth in the Kleines Haff, the western part of the Stettin Lagoon. Anklam has a population of 14,603 and was the capital of the former...
, Stargard
Stargard Szczecinski
Stargard Szczeciński is a city in northwestern Poland, with a population of 71,017 . Situated on the Ina River it is the capital of Stargard County and since 1999 has been in the West Pomeranian Voivodeship; prior to that it was in the Szczecin Voivodeship...
, Gryfino
Gryfino
Gryfino is a town in Pomerania, northwestern Poland with 22,500 inhabitants . It is also the capital of Gryfino County in West Pomeranian Voivodeship , previously in Szczecin Voivodeship ....
, Police
Police, Poland
Police is a town in the West Pomeranian Voivodeship, northwestern Poland. It is the capital of Police County. As of 2006, the town had 34,284 inhabitants. The name comes from Polish pole, which means "field"....
, Pyrzyce
Pyrzyce
Pyrzyce , is a town in Pomerania, north-western Poland, with 13,331 inhabitants Capital of the Pyrzyce County in West Pomeranian Voivodeship , previously in Szczecin Voivodeship .-History:...
, Ueckermünde
Ueckermünde
Ueckermünde is a seaport town in northeast Germany, located in the district of Vorpommern-Greifswald, Western Pomerania, near Germany's border with Poland . Ueckermünde has a long and varied history, going back to its founding by Slavs, known as the Uchri and mentioned in 934 by Widukind of Corvey...
and Goleniów
Goleniów
Goleniów is a town in Pomerania, northwestern Poland with 22,399 inhabitants . It is the capital of Goleniów County in West Pomeranian Voivodeship ; previously it was in Szczecin Voivodeship . Town area is 12.5 km², geographical situation 53°33'N and 14°49'E...
. He was also known for his generous ecclesiastical foundations and supported the extension of the secular reign of the Cammin bishops in the Kołobrzeg area.

About 1238 Barnim married Marianne (d. 1252), formerly identified as a daughter of King Eric X of Sweden
Eric X of Sweden
Eric "X" of Sweden, Swedish: Erik Knutsson; Old Norse: Eiríkr Knútsson was the King of Sweden between 1208 and 1216. Also known as Eric the Survivor when he became King, he was the only remaining son of King Canute I of Sweden and his queen of an undetermined name, who probably was Cecilia...
, secondly Margaret (d. 1261), and for the third time Matilda, a daughter of Margrave Otto III of Brandenburg, in 1267.