Encyclopedia
A stack is a geological
Geology
Geology is the science comprising the study of solid Earth, the rocks of which it is composed, and the processes by which it evolves. Geology gives insight into the history of the Earth, as it provides the primary evidence for plate tectonics, the evolutionary history of life, and past climates...
landform
Landform
A landform or physical feature in the earth sciences and geology sub-fields, comprises a geomorphological unit, and is largely defined by its surface form and location in the landscape, as part of the terrain, and as such, is typically an element of topography...
consisting of a steep and often vertical column or columns of rock in the sea near a coast, isolated by erosion. Stacks are formed through processes of coastal geomorphology, which are entirely natural. Time, wind and water are the only factors involved in the formation of a stack. They are formed when part of a headland
Headlands and bays
Headlands and bays are two related features of the coastal environment.- Geology and geography :Headlands and bays are often found on the same coastline. A bay is surrounded by land on three sides, whereas a headland is surrounded by water on three sides. Headlands are characterized by high,...
is eroded
Erosion
Erosion is when materials are removed from the surface and changed into something else. It only works by hydraulic actions and transport of solids in the natural environment, and leads to the deposition of these materials elsewhere...
by hydraulic action
Hydraulic action
Hydraulic action is strong enough to loosen sediment along the river bed and banks this will take rocks from the side of the banks and add it to the rivers loads. The water compresses the air in the crack, pushing it right to the back. As the wave retreats, the highly pressurized air is suddenly...
, which is the force of the sea or water crashing against the rock. The force of the water weakens cracks in the headland, causing them to later collapse, forming free-standing stacks and even a small island. Without the constant presence of water, stacks also form when a natural arch
Natural arch
A natural arch or natural bridge is a natural geological formation where a rock arch forms, with an opening underneath. Most natural arches form as a narrow ridge, walled by cliffs, become narrower from erosion, with a softer rock stratum under the cliff-forming stratum gradually eroding out until...
collapses under gravity, due to sub-aerial processes like wind erosion. Stacks can provide important nesting locations for seabird
Seabird
Seabirds are birds that have adapted to life within the marine environment. While seabirds vary greatly in lifestyle, behaviour and physiology, they often exhibit striking convergent evolution, as the same environmental problems and feeding niches have resulted in similar adaptations...
s, and many are popular for rock climbing
Rock climbing
Rock climbing also lightly called 'The Gravity Game', is a sport in which participants climb up, down or across natural rock formations or artificial rock walls. The goal is to reach the summit of a formation or the endpoint of a pre-defined route without falling...
. 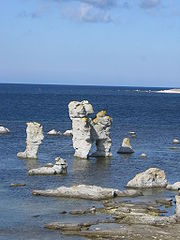 Stacks typically form in horizontally bedded sedimentary or volcanic rocks particularly on limestone
Limestone
Limestone is a sedimentary rock composed largely of the minerals calcite and aragonite, which are different crystal forms of calcium carbonate . Many limestones are composed from skeletal fragments of marine organisms such as coral or foraminifera....
cliffs. These rock types' medium hardness means medium resistance to erosion
Erosion
Erosion is when materials are removed from the surface and changed into something else. It only works by hydraulic actions and transport of solids in the natural environment, and leads to the deposition of these materials elsewhere...
. A more resistant layer may form a capstone
Capstone
Capstone may refer to:* Coping , one of the finishing or protective stones that form the top of an exterior masonry wall or building* Capstone , a US government project about cryptographic standards...
. Cliffs with weaker rock such as clay
Clay
Clay is a general term including many combinations of one or more clay minerals with traces of metal oxides and organic matter. Geologic clay deposits are mostly composed of phyllosilicate minerals containing variable amounts of water trapped in the mineral structure.- Formation :Clay minerals...
tend to slump and erode too quickly to form stacks, while harder rocks such as granite
Granite
Granite is a common and widely occurring type of intrusive, felsic, igneous rock. Granite usually has a medium- to coarse-grained texture. Occasionally some individual crystals are larger than the groundmass, in which case the texture is known as porphyritic. A granitic rock with a porphyritic...
erode in different ways.

The formation process usually begins when the sea attacks small cracks in a headland and opens them. The cracks then gradually get larger and turn into a small cave. When the cave wears through the headland, an arch forms. Further erosion causes the arch to collapse, leaving the pillar of hard rock standing away from the coast - the stack. Eventually, erosion will cause the stack to collapse, leaving a stump. This stump is usually a small rock island, small enough to be submerged by high tide.

The term kekur is used for the stacks in the Arctic
Arctic Ocean
The Arctic Ocean, located in the Northern Hemisphere and mostly in the Arctic north polar region, is the smallest and shallowest of the world's five major oceanic divisions...
and Pacific ocean
Pacific Ocean
The Pacific Ocean is the largest of the Earth's oceanic divisions. It extends from the Arctic in the north to the Southern Ocean in the south, bounded by Asia and Australia in the west, and the Americas in the east.At 165.2 million square kilometres in area, this largest division of the World...
s, in the Russian Far East
Russian Far East
Russian Far East is a term that refers to the Russian part of the Far East, i.e., extreme east parts of Russia, between Lake Baikal in Eastern Siberia and the Pacific Ocean...
, and for stone columns in the watersheds of the Lena
Lena River
The Lena is the easternmost of the three great Siberian rivers that flow into the Arctic Ocean . It is the 11th longest river in the world and has the 9th largest watershed...
, Yana
Yana River
The Yana River , is a river in Sakha in Russia, located between the Lena to the west and the Indigirka to the east.It is 872 km in length. The area of its basin is 238,000 km², whilst its annual discharge totals approximately . Most of this discharge occurs in May and June as the ice on the...
and Indigirka River
Indigirka River
The Indigirka River is a river in the Sakha Republic in Russia between the Yana River and the Kolyma River. It is in length. The area of its basin is 360,000 km²...
s.

The Swedish rauk refers to a stone column created by natural erosion. Examples are found on the islands of Gotland
Gotland
Gotland is a county, province, municipality and diocese of Sweden; it is Sweden's largest island and the largest island in the Baltic Sea. At 3,140 square kilometers in area, the region makes up less than one percent of Sweden's total land area...
, Fårö
Fårö
Fårö is a small Baltic Sea island north of the island of Gotland, off Sweden's southeastern coast. It is the second-largest island in the province. It has a population of fewer than 600 and has become a popular summer resort. The island has no banks, post offices, medical services or police...
and Öland
Öland
' is the second largest Swedish island and the smallest of the traditional provinces of Sweden. Öland has an area of 1,342 km² and is located in the Baltic Sea just off the coast of Småland. The island has 25,000 inhabitants, but during Swedish Midsummer it is visited by up to 500,000 people...
. 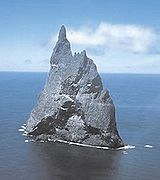 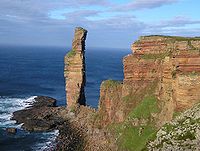