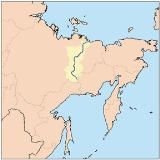 Encyclopedia
The Indigirka River is a river in the Sakha Republic in Russia
Russia
Russia or , officially known as both Russia and the Russian Federation , is a country in northern Eurasia. It is a federal semi-presidential republic, comprising 83 federal subjects...
between the Yana River
Yana River
The Yana River , is a river in Sakha in Russia, located between the Lena to the west and the Indigirka to the east.It is 872 km in length. The area of its basin is 238,000 km², whilst its annual discharge totals approximately . Most of this discharge occurs in May and June as the ice on the...
and the Kolyma River
Kolyma River
The Kolyma River is a river in northeastern Siberia, whose basin covers parts of the Sakha Republic, Chukotka Autonomous Okrug, and Magadan Oblast of Russia. Itrises in the mountains north of Okhotsk and Magadan, in the area of and...
. It is 1726 kilometres (1,072.5 mi) in length. The area of its basin
Drainage basin
A drainage basin is an extent or an area of land where surface water from rain and melting snow or ice converges to a single point, usually the exit of the basin, where the waters join another waterbody, such as a river, lake, reservoir, estuary, wetland, sea, or ocean...
is 360,000 km². The river flows into the Kolyma Bay
Kolyma Bay
The Kolyma Bay is one of the main gulfs of the East Siberian Sea.The bay gets its name from the Kolyma Lowlands, whose coastline forms the whole eastern half of this bay. The Kolyma Lowlands are dotted with numerous lakes and swamps...
, East Siberian Sea
East Siberian Sea
The East Siberian Sea is a marginal sea in the Arctic Ocean. It is located between the Arctic Cape to the north, the coast of Siberia to the south, the New Siberian Islands to the west and Cape Billings, close to Chukotka, and Wrangel Island to the east...
.
It freezes up in October and stays under the ice until May–June.

The main tributaries
Tributary
A tributary or affluent is a stream or river that flows into a main stem river or a lake. A tributary does not flow directly into a sea or ocean...
are the:

Main ports on the river are:
There is a gold prospecting
Gold prospecting
Gold prospecting is the act of searching for new gold deposits. Methods used vary with the type of deposit sought and the resources of the prospector...
industry in the Indigirka basin. Ust-Nera
Ust-Nera
Ust-Nera is an urban locality and the administrative center of Oymyakonsky District of the Sakha Republic, Russia, located at the confluence of the Nera and the Indigirka Rivers. Population:...
, a gold-mining center, is the largest settlement on the river.

The Indigirka River teems with a variety of fishes. Among the most valuable are several whitefish
Freshwater whitefish
The freshwater whitefish are fish of the subfamily Coregoninae in the salmon family Salmonidae. Along with the freshwater whitefish, the Salmonidae includes the freshwater and anadromous trout and salmon species as well as graylings...
species, such as vendace
Coregonus albula
The vendace, Coregonus albula, is a species of freshwater whitefish in the family Salmonidae. It is also known as the European cisco. It is found in lakes in northern Europe, especially Finland, Sweden, Russia and Estonia, and in some lakes of the United Kingdom, northern Germany and Poland...
, chir
Broad Whitefish
The broad whitefish is a freshwater whitefish species. Dark silvery in colour, and like a herring in its shape, its distinctive features include a convex head, short gill rakers, and a mild overbite. It is found in the Arctic-draining streams, lakes, and rivers of far eastern Russia and North...
, muksun
Muksun
The Muksun is a type of whitefish. Its name is derived from its Russian name Муксун.The muksun is a widespread fish in the Siberian Arctic waters. It is mostly found in the freshened areas of the Kara and Laptev Seas and up the major rivers, as well as in Lake Taymyr.Like all whitefishes, it is a...
, inconnu
Inconnu
Stenodus leucichthys is a species of freshwater whitefish in the family Salmonidae. It is also known variously by the common names sheefish, inconnu, connie, nelma and beloribitsa...
(nelma), omul
Omul
The omul, Coregonus migratorius, also known as Baikal omul , is a whitefish species of the salmon family endemic to Lake Baikal in Siberia, Russia. It is considered a delicacy and is the object of one of the largest commercial fisheries on Lake Baikal...
, etc.

In 1638 Ivan Rebrov reached the Indigirka. In 1636-42 Elisei Buza pioneered the overland route to the Indigirka river system. At about the same time, Poznik Ivanov ascended a tributary of the lower Lena, crossed the Verkhoyansk Range to the upper Yana and then crossed the Chersky Range
Chersky Range
The Chersky Range is a chain of mountains in northeastern Siberia between the Yana River and the Indigirka River. It generally runs from northwest to southeast through the Sakha Republic and Magadan Oblast. The tallest mountain in the range is Peak Pobeda, which is 3,003 meters tall. The range...
to the Indigirka. In 1642 Mikhail Stadukhin
Mikhail Stadukhin
Mikhail Vasilyevich Stadukhin was a Russian explorer of far northeast Siberia, one of the first to reach the Kolyma, Anadyr, Penzhina and Gizhiga Rivers and the northern Sea of Okhotsk. He was a Pomor, probably born in the village of Pinega, and the nephew of a Moscow merchant...
reached the Indigirka overland from the Lena.

Zashiversk
Zashiversk
Zashiversk was a town north of the arctic circle in what is now the Sakha Republic , Russia. It was located on the right bank of the Indigirka River where the river makes a sharp bend around the town-site. It was founded in 1639. It served as a fortress town and then as an administrative center....
on the Indigirka was an important colonial outpost during the early days of Russian colonization. It was subsequently abandoned in the 19th century. Other historical settlements, now long abandoned, were Podshiversk and Uyandinskoye Zimov'ye.

In 1892-1894 Baron Eduard Von Toll carried out geological surveys in the basin of the Indigirka (among other Far-eastern Siberian rivers) on behalf of the Russian Academy of Sciences. During one year and two days the expedition covered 25,000 km, of which 4,200 km were up rivers, carrying out geodesic surveys en route.

The isolated village of Russkoye Ustye
Russkoye Ustye
Russkoye Ustye is a village in Allaikhovsky Ulus of the Sakha Republic, Russia. For several decades during the Soviet era, the village was officially called Polyarny ....
, near the mouths of the Indigirka, is known for the unique traditional culture of the Russian settlers whose ancestors came there several centuries ago.


Shipping of the Indigirka

Mouths of the Indigirka

While Srednyaya Protoka means the "Middle Arm", the names of the main western and eastern arms indicate their relative location as well. The Kolymskaya Protoka, or Kolymskoye Ustye is the arm one located on the eastern side, i.e. the "Kolyma side" of the delta (the arm closest to the Kolyma
Kolyma
The Kolyma region is located in the far north-eastern area of Russia in what is commonly known as Siberia but is actually part of the Russian Far East. It is bounded by the East Siberian Sea and the Arctic Ocean in the north and the Sea of Okhotsk to the south...
, the eastern neighbor of the Indigirka). The Russko-Ustyinskaya Protoka, apparently known earlier as simply Russkoye Ustye is the arm one located on the western side, i.e. the "Russian side" of the delta (meaning, the side closest to the (European) Russia). These days the name of the Russko-Ustyinskaya Protoka appears as if it were formed from the name of the old Russian village Russkoye Ustye
Russkoye Ustye
Russkoye Ustye is a village in Allaikhovsky Ulus of the Sakha Republic, Russia. For several decades during the Soviet era, the village was officially called Polyarny ....
situated there, but originally the opposite is likely to have been the case, the village being named after the river arm (the Russkoye Ustye) on which it was located.

Several flat islands are formed by the channels of the delta. Listed from the east to the west, the major ones are: