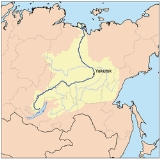 Overview
The Lena is the easternmost of the three great Siberia
Siberia
Siberia is an extensive region constituting almost all of Northern Asia. Comprising the central and eastern portion of the Russian Federation, it was part of the Soviet Union from its beginning, as its predecessor states, the Tsardom of Russia and the Russian Empire, conquered it during the 16th...
n river
River
A river is a natural watercourse, usually freshwater, flowing towards an ocean, a lake, a sea, or another river. In a few cases, a river simply flows into the ground or dries up completely before reaching another body of water. Small rivers may also be called by several other names, including...
s that flow into the Arctic Ocean (the other two being the Ob River
Ob River
The Ob River , also Obi, is a major river in western Siberia, Russia and is the world's seventh longest river. It is the westernmost of the three great Siberian rivers that flow into the Arctic Ocean .The Gulf of Ob is the world's longest estuary.-Names:The Ob is known to the Khanty people as the...
and the Yenisei River
Yenisei River
Yenisei , also written as Yenisey, is the largest river system flowing to the Arctic Ocean. It is the central of the three great Siberian rivers that flow into the Arctic Ocean...
). It is the 11th longest river in the world and has the 9th largest watershed
Drainage basin
A drainage basin is an extent or an area of land where surface water from rain and melting snow or ice converges to a single point, usually the exit of the basin, where the waters join another waterbody, such as a river, lake, reservoir, estuary, wetland, sea, or ocean...
. It is the greatest Russia
Russia
Russia or , officially known as both Russia and the Russian Federation , is a country in northern Eurasia. It is a federal semi-presidential republic, comprising 83 federal subjects...
n river with its watershed entirely within national ranges.
Rising at the height of 1640 metres (5,381 ft) at its source Baikal Mountains
Baikal Mountains
thumb|right|300px|The mountains and lake in the summer, as seen from [[Bolshiye Koty]] on the southwest shoreThe Baikal Mountains or Baikal Range rise steeply over the northwestern shore of Lake Baikal in southern Siberia, Russia...
south of the Central Siberian Plateau
Central Siberian Plateau
The Central Siberian Plateau is made up of sharply demarcated surfaces of varying altitudes occupying most of Siberia between the Yenisei and Lena rivers. It extends over an area of 3.5 million km². The highest point is the Putoran Mountains rising to 1701 m. To the north of the plateau are...
, 7 kilometres (4 mi) west of Lake Baikal
Lake Baikal
Lake Baikal is the world's oldest at 30 million years old and deepest lake with an average depth of 744.4 metres.Located in the south of the Russian region of Siberia, between Irkutsk Oblast to the northwest and the Buryat Republic to the southeast, it is the most voluminous freshwater lake in the...
, the Lena flows northeast, being joined by the Kirenga River
Kirenga River
Kirenga River is a river in Irkutsk Oblast in Russia, a right tributary of the Lena which flows north between the upper Lena and Lake Baikal. The length of the river is 746 km. The area of its basin is 46,600 km². The Kirenga River freezes up in the late October - early November and...
, Vitim River
Vitim River
Vitim River is a major tributary of the Lena River. With its source east of Lake Baikal, the Vitim flows 1,978 km north through the Transbaykalian Mountains and the town of Bodaybo. The river peaks in June and freezes from November to May. It is navigable from the Lena to Bodaybo. Upstream,...
and Olyokma River
Olyokma River
The Olyokma River is a tributary of the Lena in eastern Siberia. To the west is the Vitim River, to the south the Shilka River and Amur River and to the east, the upper Aldan River. Its right branch, the Tungur River, leads to a portage to the Shilka. Yerofey Khabarov used this route to travel...
.

I'm interested in the Ice Road along the Lena River from Yakutsk to Tiksi. Specifically, how early and late in the year is it typically usable? How ...

As we all know the Lena is Russia's longest river, but which north sea does the Lena flow into?
More
x