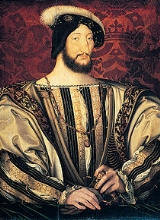 Overview
Francis I (12 September 1494 – 31 March 1547) was King of France from 1515 until his death. During his reign, huge cultural changes took place in France and he has been called France's original Renaissance
Renaissance
The Renaissance was a cultural movement that spanned roughly the 14th to the 17th century, beginning in Italy in the Late Middle Ages and later spreading to the rest of Europe. The term is also used more loosely to refer to the historical era, but since the changes of the Renaissance were not...
monarch. His permanent rivalry with the Emperor Charles V for hegemony
Hegemony
Hegemony is an indirect form of imperial dominance in which the hegemon rules sub-ordinate states by the implied means of power rather than direct military force. In Ancient Greece , hegemony denoted the politico–military dominance of a city-state over other city-states...
in Europe was the origin of a long and ruinous military conflict that gave rise to the Protestant revolution
Protestant Reformation
The Protestant Reformation was a 16th-century split within Western Christianity initiated by Martin Luther, John Calvin and other early Protestants. The efforts of the self-described "reformers", who objected to the doctrines, rituals and ecclesiastical structure of the Roman Catholic Church, led...
.

Does anyone know if Francis I was a horseman?

Friends Does the palace of king francis 1 still exist in france?..I searched for one of its fotograph..couldnt findout..
More

1515    King Francis I of France succeeds to the French throne.

1516    The Treaty of Noyon between France and Spain is signed. Francis I of France recognises Charles's claim to Naples, and Charles V, Holy Roman Emperor recognises Francis's claim to Milan.

1532    Henry VIII and François I sign a secret treaty against Emperor Charles V.

1534    French explorer Jacques Cartier plants a cross on the Gaspé Peninsula and takes possession of the territory in the name of Francis I of France.

1539    Treaty of Toledo signed by King Francis I of France and Holy Roman Emperor Charles V.