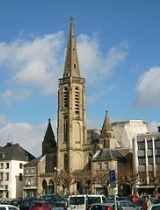 Encyclopedia
Saarlouis is a city in the Saarland
Saarland
Saarland is one of the sixteen states of Germany. The capital is Saarbrücken. It has an area of 2570 km² and 1,045,000 inhabitants. In both area and population, it is the smallest state in Germany other than the city-states...
, Germany
Germany
Germany , officially the Federal Republic of Germany , is a federal parliamentary republic in Europe. The country consists of 16 states while the capital and largest city is Berlin. Germany covers an area of 357,021 km2 and has a largely temperate seasonal climate...
, capital of the district of Saarlouis
Saarlouis (district)
Saarlouis is a Kreis in the middle of the Saarland, Germany. Neighboring districts are Merzig-Wadern, Sankt Wendel, Neunkirchen, Saarbrücken, and the French département Moselle.-History:...
. In 2006, the town had a population of 38,327. Saarlouis, as the name implies, is located at the river Saar
Saar River
The Saar is a river in northeastern France and western Germany, and a right tributary of the Moselle. It rises in the Vosges mountains on the border of Alsace and Lorraine and flows northwards into the Moselle near Trier. It has two headstreams , that both start near Mont Donon, the highest peak...
.
It was built as a fortress in 1680 and named after Louis XIV of France
Louis XIV of France
Louis XIV , known as Louis the Great or the Sun King , was a Bourbon monarch who ruled as King of France and Navarre. His reign, from 1643 to his death in 1715, began at the age of four and lasted seventy-two years, three months, and eighteen days...
. 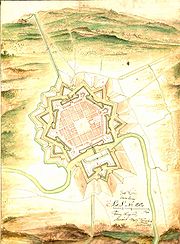 With the Treaties of Peace of Nijmegen
Treaties of Nijmegen
The Treaties of Peace of Nijmegen were a series of treaties signed in the Dutch city of Nijmegen between August 1678 and December 1679...
in 1678/79, the Lorraine
Lorraine (province)
The Duchy of Upper Lorraine was an historical duchy roughly corresponding with the present-day northeastern Lorraine region of France, including parts of modern Luxembourg and Germany. The main cities were Metz, Verdun, and the historic capital Nancy....
fell to France. In 1680, Louis XIV of France
Louis XIV of France
Louis XIV , known as Louis the Great or the Sun King , was a Bourbon monarch who ruled as King of France and Navarre. His reign, from 1643 to his death in 1715, began at the age of four and lasted seventy-two years, three months, and eighteen days...
gave order to build a fortification (to defend the new French Eastern frontier) on the banks of the river Saar which was called Sarre-Louis. France's famous military engineer
Military engineer
In military science, engineering refers to the practice of designing, building, maintaining and dismantling military works, including offensive, defensive and logistical structures, to shape the physical operating environment in war...
, Sébastien Le Prestre de Vauban, constructed the city, the plans were made by Thomas de Choisy, the city's first Gouvenour.
In 1683, Louis XIV visited the fortress and granted arms. The coat of arms shows the rising sun and three Fleur-de-lis
Fleur-de-lis
The fleur-de-lis or fleur-de-lys is a stylized lily or iris that is used as a decorative design or symbol. It may be "at one and the same time, political, dynastic, artistic, emblematic, and symbolic", especially in heraldry...
. The heraldic motto is Dissipat Atque Fovet: She (the sun) dispels (the clouds) and heats (the earth).

In 1697, with the Treaty of Ryswick
Treaty of Ryswick
The Treaty of Ryswick or Ryswyck was signed on 20 September 1697 and named after Ryswick in the Dutch Republic. The treaty settled the Nine Years' War, which pitted France against the Grand Alliance of England, Spain, the Holy Roman Empire and the United Provinces.Negotiations started in May...
, most parts of Lorraine gained independence again, but Saarlouis and the surrounding areas remained a French exclave.
During the French Revolution, the town was renamed Sarre-Libre, but it returned to its original name in 1810.
With the Treaty of Paris
Treaty of Paris (1815)
Treaty of Paris of 1815, was signed on 20 November 1815 following the defeat and second abdication of Napoleon Bonaparte. In February, Napoleon had escaped from his exile on Elba; he entered Paris on 20 March, beginning the Hundred Days of his restored rule. Four days after France's defeat in the...
in 1815, Saarlouis (and the whole region later known as the Saargebiet) became Prussian
Kingdom of Prussia
The Kingdom of Prussia was a German kingdom from 1701 to 1918. Until the defeat of Germany in World War I, it comprised almost two-thirds of the area of the German Empire...
.

From 1936 till 1945, Saarlouis was named as Saarlautern (-lautern being a common ending of town and village names in Germany) in an attempt by the Nazis to Germanize the town name.

After World War II
World War II
World War II, or the Second World War , was a global conflict lasting from 1939 to 1945, involving most of the world's nations—including all of the great powers—eventually forming two opposing military alliances: the Allies and the Axis...
, the region (then called the Saarland
Saarland
Saarland is one of the sixteen states of Germany. The capital is Saarbrücken. It has an area of 2570 km² and 1,045,000 inhabitants. In both area and population, it is the smallest state in Germany other than the city-states...
), was again occupied by France.
In a plebiscite in 1955, most of the people in the Saarland opted for the reunification with the Federal Republic of Germany, and on January 1, 1957, it became the 10th federal state of West Germany.

In 1980, Saarlouis celebrated its 300th anniversary.

Even today, the ancient fortress
Fortification
Fortifications are military constructions and buildings designed for defence in warfare and military bases. Humans have constructed defensive works for many thousands of years, in a variety of increasingly complex designs...
dominates the city's hexagonal floor plan. Beside the buildings made by Vauban, there are also some constructions left from the 19th century when the Prussians got control over the town.
After 1887, some parts of the fortress were slighted
Slighting
A slighting is the deliberate destruction, partial or complete, of a fortification without opposition. During the English Civil War this was to render it unusable as a fort.-Middle Ages:...
, but many buildings and places, e.g. the casemates, some barracks
Barracks
Barracks are specialised buildings for permanent military accommodation; the word may apply to separate housing blocks or to complete complexes. Their main object is to separate soldiers from the civilian population and reinforce discipline, training and esprit de corps. They were sometimes called...
and the Great Market with the Commander's Office and the Vauban island,a former ravelin
Ravelin
A ravelin is a triangular fortification or detached outwork, located in front of the innerworks of a fortress...
with a memorial for Michel Ney
Michel Ney
Michel Ney , 1st Duc d'Elchingen, 1st Prince de la Moskowa was a French soldier and military commander during the French Revolutionary Wars and the Napoleonic Wars. He was one of the original 18 Marshals of France created by Napoleon I...
can still be seen today.

Saarlouis was famous for its nearby steel and iron ore production and its nearby mining facilities. Today, the Ford Motor Company
Ford Motor Company
Ford Motor Company is an American multinational automaker based in Dearborn, Michigan, a suburb of Detroit. The automaker was founded by Henry Ford and incorporated on June 16, 1903. In addition to the Ford and Lincoln brands, Ford also owns a small stake in Mazda in Japan and Aston Martin in the UK...
is the city's largest employer, producing the Ford Focus. The plant in the Roederberg suburb is one of Ford's most efficient facilities worldwide.

The city is located 20 minutes' drive from France, and 45 minutes from Luxembourg City, the capital of Luxembourg
Luxembourg
Luxembourg , officially the Grand Duchy of Luxembourg , is a landlocked country in western Europe, bordered by Belgium, France, and Germany. It has two principal regions: the Oesling in the North as part of the Ardennes massif, and the Gutland in the south...
.
It is connected to Saarbrücken
Saarbrücken
Saarbrücken is the capital of the state of Saarland in Germany. The city is situated at the heart of a metropolitan area that borders on the west on Dillingen and to the north-east on Neunkirchen, where most of the people of the Saarland live....
by the A 620
Bundesautobahn 620
is an autobahn in Germany, connecting Saarlouis with Saarbrücken. Together with the A 6, it serves as part of the connection between Luxembourg and Germany. As the mayor part of the BAB 620 is alongside the river Saar, one section in Saarbrücken, the so-called "Stadtautobahn" is subject...
and with Luxembourg by the A 8
Bundesautobahn 8
is an autobahn in southern Germany that runs 497 km from the Luxembourg A13 motorway at Schengen via Neunkirchen, Pirmasens, Karlsruhe, Stuttgart, Ulm, Augsburg and Munich to the Austrian West Autobahn near Salzburg....
.

St-Nazaire, France
France
The French Republic , The French Republic , The French Republic , (commonly known as France , is a unitary semi-presidential republic in Western Europe with several overseas territories and islands located on other continents and in the Indian, Pacific, and Atlantic oceans. Metropolitan France...
, since 1969 Eisenhüttenstadt
Eisenhüttenstadt
Eisenhüttenstadt is a town in the Oder-Spree district of Brandenburg, Germany at the border with Poland. The town was founded in 1950 alongside a new steel mill as a socialist model city and has a population of 32,214...
, Germany
Germany
Germany , officially the Federal Republic of Germany , is a federal parliamentary republic in Europe. The country consists of 16 states while the capital and largest city is Berlin. Germany covers an area of 357,021 km2 and has a largely temperate seasonal climate...
, since 1986 (the first West and East German town twinning
Town twinning
Twin towns and sister cities are two of many terms used to describe the cooperative agreements between towns, cities, and even counties in geographically and politically distinct areas to promote cultural and commercial ties.- Terminology :...
) Matiguás
Matiguás
Matiguas is a municipality in the Matagalpa department of Nicaragua....
, Nicaragua
Nicaragua
Nicaragua is the largest country in the Central American American isthmus, bordered by Honduras to the north and Costa Rica to the south. The country is situated between 11 and 14 degrees north of the Equator in the Northern Hemisphere, which places it entirely within the tropics. The Pacific Ocean...
, since 1986 Bochnia
Bochnia
Bochnia is a town of 30,000 inhabitants on the river Raba in southern Poland. The town lies approximately in halfway [] between Tarnów and the regional capital Kraków . Bochnia is most noted for its salt mine, the oldest functioning in Europe, built circa 1248...
, since 2001