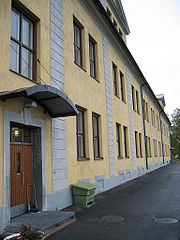 Barracks are specialised buildings for permanent military
Military
A military is an organization authorized by its greater society to use lethal force, usually including use of weapons, in defending its country by combating actual or perceived threats. The military may have additional functions of use to its greater society, such as advancing a political agenda e.g...
accommodation; the word may apply to separate housing blocks or to complete complexes. Their main object is to separate soldiers from the civilian population and reinforce discipline, training and esprit de corps. They were sometimes called discipline factories for soldiers. Like industrial factories, they are sometimes synonymous with shoddy or dull buildings although there are examples of magnificent architecture such as the Collins barracks
Collins Barracks (Dublin)
Collins Barracks is a former military barracks in the Arbour Hill area of Dublin, Ireland. The buildings are now the National Museum of Ireland, Decorative Arts and History...
and others in Paris, Berlin, Madrid, Vienna or London.

Early barracks such as those of the Roman Praetorian Guard
Praetorian Guard
The Praetorian Guard was a force of bodyguards used by Roman Emperors. The title was already used during the Roman Republic for the guards of Roman generals, at least since the rise to prominence of the Scipio family around 275 BC...
were built to maintain elite forces. There are a number of remains of Roman army
Roman army
The Roman army is the generic term for the terrestrial armed forces deployed by the kingdom of Rome , the Roman Republic , the Roman Empire and its successor, the Byzantine empire...
barracks in frontier forts such as Vercovicium and Vindolanda
Vindolanda
Vindolanda was a Roman auxiliary fort just south of Hadrian's Wall in northern England. Located near the modern village of Bardon Mill, it guarded the Stanegate, the Roman road from the River Tyne to the Solway Firth...
. From these and from contemporary Roman sources we can see that the basics of life in a military camp
Military camp
A military camp or bivouac is a semi-permanent facility for the lodging of an army. Camps are erected when a military force travels away from a major installation or fort during training or operations, and often have the form of large campsites. In the Roman era the military camp had highly...
have remained constant for thousands of years.
In the early modern period
Early modern period
In history, the early modern period of modern history follows the late Middle Ages. Although the chronological limits of the period are open to debate, the timeframe spans the period after the late portion of the Middle Ages through the beginning of the Age of Revolutions...
they formed part of the 'Military Revolution
Military Revolution
The Military Revolution refers to a radical change in military strategy and tactics with resulting major changes in government. The concept was introduced by Michael Roberts in the 1950s as he focused on Sweden 1560–1660 searching for major changes in the European way of war caused by introduction...
' that scholars believe contributed decisively to the formation of the nation state by increasing the expense of maintaining standing armies. Large, permanent barracks were developed in the 18th century by the two dominant states of the period, France and Spain. The English term ‘barrack’, on the other hand, derives form the Spanish word for a temporary shelter erected by soldiers on campaign, barraca. Because of fears that a standing army in barracks would be a threat to the constitution, barracks were not built in Great Britain until 1790, on the eve of the Napoleonic War.

Early barracks were multi-storey blocks often grouped in a quadrangle around a courtyard or parade ground. A good example is Ravensdowne Barracks Berwick-upon-Tweed
Berwick-upon-Tweed
Berwick-upon-Tweed or simply Berwick is a town in the county of Northumberland and is the northernmost town in England, on the east coast at the mouth of the River Tweed. It is situated 2.5 miles south of the Scottish border....
, among the first in England to be purpose-built and begun in 1717 to the design of the distinguished architect Nicholas Hawksmoor
Nicholas Hawksmoor
Nicholas Hawksmoor was a British architect born in Nottinghamshire, probably in East Drayton.-Life:Hawksmoor was born in Nottinghamshire in 1661, into a yeoman farming family, almost certainly in East Drayton, Nottinghamshire. On his death he was to leave property at nearby Ragnall, Dunham and a...
. During the 19th century the increasing sophistication of military life lead to separate housing for different ranks (officers had always had larger rooms) and married quarters, and the provision of specialized buildings such as dining rooms and cook houses, bath houses, mess rooms, schools, hospitals, armouries, gymnasia, riding schools and stables. The pavilion plan concept of hospital design was influential in barrack planning after the Crimean War
Crimean War
The Crimean War was a conflict fought between the Russian Empire and an alliance of the French Empire, the British Empire, the Ottoman Empire, and the Kingdom of Sardinia. The war was part of a long-running contest between the major European powers for influence over territories of the declining...
.

The first large-scale training camps were built in France and Germany during the early 19th century. The British army built Aldershot
Aldershot
Aldershot is a town in the English county of Hampshire, located on heathland about southwest of London. The town is administered by Rushmoor Borough Council...
camp from 1854.

By the First World War, infantry, artillery and cavalry regiments had separate barracks. The first naval barracks were hulk
Hulk (ship)
A hulk is a ship that is afloat, but incapable of going to sea. Although sometimes used to describe a ship that has been launched but not completed, the term most often refers to an old ship that has had its rigging or internal equipment removed, retaining only its flotational qualities...
s, old wooden sailing vessels, but these insanitary lodgings were replaced with large naval barracks at the major dockyard towns of Europe and the United States, usually with hammocks instead of beds.

These were inadequate for the enormous armies mobilised after 1914. Hut camps were developed using variations of the eponymous Nissen hut
Nissen hut
A Nissen hut is a prefabricated steel structure made from a half-cylindrical skin of corrugated steel, a variant of which was used extensively during World War II.-Description:...
, made from timber or corrugated iron.

In many militaries, NCO
Non-commissioned officer
A non-commissioned officer , called a sub-officer in some countries, is a military officer who has not been given a commission...
s and enlisted personnel will frequently be housed in barracks for service or training. Junior enlisted and sometimes junior NCOs will often receive less space and may be housed in bays, while senior NCOs and officers may share or have their own room.
The term "Garrison
Garrison
Garrison is the collective term for a body of troops stationed in a particular location, originally to guard it, but now often simply using it as a home base....
town" is a common expression for any town that has military barracks, i.e., a permanent military presence nearby.

Barracks blockhouses were used to house troops in forts in Upper Canada. The Stone Frigate
Stone frigate
Stone frigate is a nickname for a naval establishment on land. The term has its origin in Britain's Royal Navy after its use of Diamond Rock, off Martinique, as a 'sloop of war' to harass the French...
, completed in 1820, served as barracks briefly in 1837-38, and was refitted as a dormitory
Dormitory
A dormitory, often shortened to dorm, in the United States is a residence hall consisting of sleeping quarters or entire buildings primarily providing sleeping and residential quarters for large numbers of people, often boarding school, college or university students...
and classrooms to house the Royal Military College of Canada
Royal Military College of Canada
The Royal Military College of Canada, RMC, or RMCC , is the military academy of the Canadian Forces, and is a degree-granting university. RMC was established in 1876. RMC is the only federal institution in Canada with degree granting powers...
by 1876. The Stone frigate is a large stone building originally designed to hold gear and rigging from British warships dismantled to comply with the Rush-Bagot Agreement.

In basic training, and sometimes follow-on training, servicemembers live in barracks. The U.S. Marine Corps have gender-separate basic training units. The U.S. Army has gender-separate basic training, but like the United States Coast Guard
United States Coast Guard
The United States Coast Guard is a branch of the United States Armed Forces and one of the seven U.S. uniformed services. The Coast Guard is a maritime, military, multi-mission service unique among the military branches for having a maritime law enforcement mission and a federal regulatory agency...
, U.S. Air Force and U.S. Navy, has training where male and female recruits share barracks, but are separated during personal time and lights out. However, all the services integrate male and female members following boot camp and first assignment, except the U.S. Navy's submarine corps and the different branches' various combat arms
Combat Arms
Combat Arms is a multiplayer game, free-to-play modern first-person shooter developed by the South Korea-based developer Doobic Studios, and published by Nexon. The game uses the Lithtech game engine to produce its graphics.- Gameplay :...
elements.

After training, unmarried junior enlisted members will typically reside in barracks. In the 21st century, these servicemembers are generally housed in individual rooms conforming to the DoD's
United States Department of Defense
The United States Department of Defense is the U.S...
"1+1 standard," though exceptions still exist. During unaccompanied, dependent-restricted assignmments, noncommissioned and commissioned officer ranks may also be required to live in barracks. Amenities in these barracks increase with the rank of the occupant.

Unlike the other services, the U.S. Air Force officially uses the term "dormitory" to refer to its unaccompanied housing.

During World War II
World War II
World War II, or the Second World War , was a global conflict lasting from 1939 to 1945, involving most of the world's nations—including all of the great powers—eventually forming two opposing military alliances: the Allies and the Axis...
, many U.S. barracks were made of inexpensive, sturdy and easy to assemble Quonset hut
Quonset hut
A Quonset hut is a lightweight prefabricated structure of corrugated galvanized steel having a semicircular cross section. The design was based on the Nissen hut developed by the British during World War I...
s that resembled Native American long house
Native American long house
Longhouses were built by native peoples in various parts of North America, sometimes reaching over but generally around wide. The dominant theory is that walls were made of sharpened and fire-hardened poles driven into the ground and the roof consisted of leaves and grass...
(being semi-circular but made out of metal).