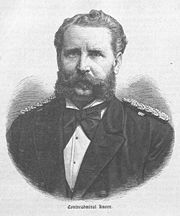 Ernst Wilhelm Eduard von Knorr (8 March 1840 – 17 February 1920) was a German
Germany
Germany , officially the Federal Republic of Germany , is a federal parliamentary republic in Europe. The country consists of 16 states while the capital and largest city is Berlin. Germany covers an area of 357,021 km2 and has a largely temperate seasonal climate...
admiral
Admiral
Admiral is the rank, or part of the name of the ranks, of the highest naval officers. It is usually considered a full admiral and above vice admiral and below admiral of the fleet . It is usually abbreviated to "Adm" or "ADM"...
of the Kaiserliche Marine
Kaiserliche Marine
The Imperial German Navy was the German Navy created at the time of the formation of the German Empire. It existed between 1871 and 1919, growing out of the small Prussian Navy and Norddeutsche Bundesmarine, which primarily had the mission of coastal defense. Kaiser Wilhelm II greatly expanded...
who helped establish the German colonial empire
German colonial empire
The German colonial empire was an overseas domain formed in the late 19th century as part of the German Empire. Short-lived colonial efforts by individual German states had occurred in preceding centuries, but Imperial Germany's colonial efforts began in 1884...
.

Born in Saarlouis
Saarlouis
Saarlouis is a city in the Saarland, Germany, capital of the district of Saarlouis. In 2006, the town had a population of 38,327. Saarlouis, as the name implies, is located at the river Saar....
, Rhenish Prussia
Rhine Province
The Rhine Province , also known as Rhenish Prussia or synonymous to the Rhineland , was the westernmost province of the Kingdom of Prussia and the Free State of Prussia, within the German Reich, from 1822-1946. It was created from the provinces of the Lower Rhine and Jülich-Cleves-Berg...
, Knorr entered the Prussian Navy
Prussian Navy
Throughout the centuries, Prussia’s military consistently concentrated on its land power, and never sought a similar power at sea. Yet historically there were always Prussian naval forces , beginning in the days when "Prussia" meant only the Margraviate of Brandenburg.- The Navy of Electoral...
in 1856. While serving on the corvette Danzig, he fought against pirates off the coast of Morocco
Morocco
Morocco , officially the Kingdom of Morocco , is a country located in North Africa. It has a population of more than 32 million and an area of 710,850 km², and also primarily administers the disputed region of the Western Sahara...
later that year. In 1859 he was promoted to Unterleutnant. From 1859–62 he sailed with the Elbe on an expedition to the Far East
Far East
The Far East is an English term mostly describing East Asia and Southeast Asia, with South Asia sometimes also included for economic and cultural reasons.The term came into use in European geopolitical discourse in the 19th century,...
. Knorr was promoted to Leutnant in 1862 and Kapitänleutnant in 1865.

On 12 November 1870, during the Franco-Prussian War
Franco-Prussian War
The Franco-Prussian War or Franco-German War, often referred to in France as the 1870 War was a conflict between the Second French Empire and the Kingdom of Prussia. Prussia was aided by the North German Confederation, of which it was a member, and the South German states of Baden, Württemberg and...
, Knorr commanded the gunboat
Gunboat
A gunboat is a naval watercraft designed for the express purpose of carrying one or more guns to bombard coastal targets, as opposed to those military craft designed for naval warfare, or for ferrying troops or supplies.-History:...
Meteor in a battle with the French aviso
Aviso
An aviso , a kind of dispatch boat or advice boat, survives particularly in the French navy, they are considered equivalent to the modern sloop....
Bouvet near Havana
Havana
Havana is the capital city, province, major port, and leading commercial centre of Cuba. The city proper has a population of 2.1 million inhabitants, and it spans a total of — making it the largest city in the Caribbean region, and the most populous...
, for which he was awarded the Iron Cross
Iron Cross
The Iron Cross is a cross symbol typically in black with a white or silver outline that originated after 1219 when the Kingdom of Jerusalem granted the Teutonic Order the right to combine the Teutonic Black Cross placed above a silver Cross of Jerusalem....
2nd Class. In 1871 he was promoted to Korvettenkapitän.

Beginning in 1874, Knorr took part in a voyage through the Pacific Ocean
Pacific Ocean
The Pacific Ocean is the largest of the Earth's oceanic divisions. It extends from the Arctic in the north to the Southern Ocean in the south, bounded by Asia and Australia in the west, and the Americas in the east.At 165.2 million square kilometres in area, this largest division of the World...
to discuss trade negotiations with Tonga
Tonga
Tonga, officially the Kingdom of Tonga , is a state and an archipelago in the South Pacific Ocean, comprising 176 islands scattered over of ocean in the South Pacific...
on behalf of the German Empire
German Empire
The German Empire refers to Germany during the "Second Reich" period from the unification of Germany and proclamation of Wilhelm I as German Emperor on 18 January 1871, to 1918, when it became a federal republic after defeat in World War I and the abdication of the Emperor, Wilhelm II.The German...
. He was named Kapitän zur See in 1876, Chief of Staff of the Admiralty in 1881, and Konteradmiral in 1883.

As commander of the West African Squadron in December 1884, Knorr intervened in disputes between rival clans in Douala
Douala
Douala is the largest city in Cameroon and the capital of Cameroon's Littoral Province. Home to Cameroon's largest port and its major international airport, Douala International Airport, it is the commercial capital of the country...
, Cameroon
Cameroon
Cameroon, officially the Republic of Cameroon , is a country in west Central Africa. It is bordered by Nigeria to the west; Chad to the northeast; the Central African Republic to the east; and Equatorial Guinea, Gabon, and the Republic of the Congo to the south. Cameroon's coastline lies on the...
, imposing German sovereignty over the Cameroon Estuary. He was awarded the Order of the Red Eagle
Order of the Red Eagle
The Order of the Red Eagle was an order of chivalry of the Kingdom of Prussia. It was awarded to both military personnel and civilians, to recognize valor in combat, excellence in military leadership, long and faithful service to the kingdom, or other achievements...
for this success. From 1 April 1885 – 4 July 1885 Knorr was Reichskommissar
Reichskommissar
Reichskommissar , in German history, was an official gubernatorial title used for various public offices during the period of the German Empire and the Nazi Third Reich....
of the German colony of Kamerun
Kamerun
German Cameroon was a West African colony of the German Empire from 1884 to 1916 in the region of today's Republic of Cameroon.-History:-1800s:...
. He then commanded a cruiser squadron travelling to Zanzibar
Zanzibar
Zanzibar ,Persian: زنگبار, from suffix bār: "coast" and Zangi: "bruin" ; is a semi-autonomous part of Tanzania, in East Africa. It comprises the Zanzibar Archipelago in the Indian Ocean, off the coast of the mainland, and consists of numerous small islands and two large ones: Unguja , and Pemba...
and negotiated with its sultan for the acquisition of a strip of German colonial territory.

In 1886 Knorr commanded a cruiser squadron at Samoa
Samoa
Samoa , officially the Independent State of Samoa, formerly known as Western Samoa is a country encompassing the western part of the Samoan Islands in the South Pacific Ocean. It became independent from New Zealand in 1962. The two main islands of Samoa are Upolu and one of the biggest islands in...
. He was promoted to Vizeadmiral in 1889, Admiral in 1893, and Commanding Admiral in 1895. Raised to the German nobility
German nobility
The German nobility was the elite hereditary ruling class or aristocratic class from ca. 500 B.C. to the Holy Roman Empire and what is now Germany.-Principles of German nobility:...
on January 18, 1896, he received the Order of the Black Eagle
Order of the Black Eagle
The Order of the Black Eagle was the highest order of chivalry in the Kingdom of Prussia. The order was founded on 17 January 1701 by Elector Friedrich III of Brandenburg . In his Dutch exile after WWI, deposed Emperor Wilhelm II continued to award the order to his family...
on June 15, 1898. Knorr retired in 1899 and was appointed an admiral à la suite
À la suite
À la suite was a military title, given to those who were entitled to wear a regimental uniform but otherwise had no official position. It can best be translated as "in the entourage of".In Prussia, these were:...
of the Seeoffizierkorps.

Knorr died in Berlin
Berlin
Berlin is the capital city of Germany and is one of the 16 states of Germany. With a population of 3.45 million people, Berlin is Germany's largest city. It is the second most populous city proper and the seventh most populous urban area in the European Union...
. Admiral-Knorr-Straße, a street in Saarlouis, is named after him.