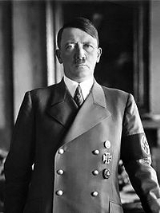 Overview
Adolf Hitler (ˈadɔlf ˈhɪtlɐ; 20 April 1889 – 30 April 1945) was an Austrian-born German
Germans
The Germans are a Germanic ethnic group native to Central Europe. The English term Germans has referred to the German-speaking population of the Holy Roman Empire since the Late Middle Ages....
politician and the leader of the National Socialist German Workers Party ( (NSDAP), commonly referred to as the Nazi Party). He was Chancellor of Germany from 1933 to 1945, and head of state
Head of State
A head of state is the individual that serves as the chief public representative of a monarchy, republic, federation, commonwealth or other kind of state. His or her role generally includes legitimizing the state and exercising the political powers, functions, and duties granted to the head of...
(as Führer und Reichskanzler
Führer
Führer , alternatively spelled Fuehrer in both English and German when the umlaut is not available, is a German title meaning leader or guide now most associated with Adolf Hitler, who modelled it on Benito Mussolini's title il Duce, as well as with Georg von Schönerer, whose followers also...
) from 1934 to 1945. Hitler is most commonly associated with the rise of fascism
Fascism
Fascism is a radical authoritarian nationalist political ideology. Fascists seek to rejuvenate their nation based on commitment to the national community as an organic entity, in which individuals are bound together in national identity by suprapersonal connections of ancestry, culture, and blood...
in Europe, World War II
World War II
World War II, or the Second World War , was a global conflict lasting from 1939 to 1945, involving most of the world's nations—including all of the great powers—eventually forming two opposing military alliances: the Allies and the Axis...
, and the Holocaust
The Holocaust
The Holocaust , also known as the Shoah , was the genocide of approximately six million European Jews and millions of others during World War II, a programme of systematic state-sponsored murder by Nazi...
.

A decorated veteran of World War I
World War I
World War I , which was predominantly called the World War or the Great War from its occurrence until 1939, and the First World War or World War I thereafter, was a major war centred in Europe that began on 28 July 1914 and lasted until 11 November 1918...
, Hitler joined the German Workers' Party
German Workers' Party
The German Workers' Party was the short-lived predecessor of the Nazi Party .-Origins:The DAP was founded in Munich in the hotel "Fürstenfelder Hof" on January 5, 1919 by Anton Drexler, a member of the occultist Thule Society. It developed out of the "Freien Arbeiterausschuss für einen guten...
, precursor of the Nazi Party, in 1919, and became leader of the NSDAP in 1921.

Sir, Please, I would like to know how many camps of concentratión of jews and its names were during the period 1939-1945. My best wishes

Where did Hitler have his weapon research labs located in WWII? I would assume they would be in Germany but i dont know what city or area.
More

Was his life story book Mein Kanpf written by himself?

Was he influenced by figures at the time who commanded the name that he eventually did?

Is there something that made him anti Semitic?

Did Adolf Hitler have a abusive past which made his ways as radical?

1921    The Sturmabteilung or SA is formed by Adolf Hitler

1923    Beer Hall Putsch: In Munich, Adolf Hitler leads the Nazis in an unsuccessful attempt to overthrow the German government.

1924    Adolf Hitler is sentenced to five years in jail for his participation in the "Beer Hall Putsch". However, he spends only nine months in jail, during which he writes ''Mein Kampf''.

1932    Adolf Hitler obtains German citizenship by naturalization, which allows him to run in the 1932 election for Reichspräsident.

1933    Adolf Hitler is sworn in as Chancellor of Germany.

The German Church and the People are practically the same body. Therefore there could be no issue between Church and State. The Church, as such, has nothing to do with political affairs. On the other hand, the State has nothing to do with the faith or inner organization of the Church. The election of November 12th would be an expression of church constituency, but not as a Church. answering C. F. Macfarland's The New Church and the New Germany

The church is certainly necessary for the people. It is a strong and conservative element.

It will at any rate be my supreme task to see to it that in the newly awakened NSDAP, the adherents of both Confessions can live peacefully together side by side in order that they may take their stand in the common fight against the power which is the mortal foe of any true Christianity.

The fact that the Vatican is concluding a treaty with the new Germany means the acknowledgement of the National Socialist state by the Catholic Church. This treaty shows the whole world clearly and unequivocally that the assertion that National Socialism [Nazism] is hostile to religion is a lie.

We want the people to be peace-loving, but also to be courageous.

Just as the Jew could once incite the mob of Jerusalem against Christ, so today he must succeed in inciting folk who have been duped into madness to attack those who, God's truth! seek to deal with this people in utter honesty and sincerity.

In the Bible we find the text, 'That which is neither hot nor cold will I spew out of my mouth.' This utterance of the great Nazarene has kept its profound validity until the present day.