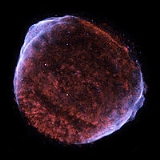 Chinese
Chinese astronomy
Astronomy in China has a very long history, with historians considering that "they [the Chinese] were the most persistent and accurate observers of celestial phenomena anywhere in the world before the Arabs."...
and Arab astronomers
Islamic astronomy
Islamic astronomy or Arabic astronomy comprises the astronomical developments made in the Islamic world, particularly during the Islamic Golden Age , and mostly written in the Arabic language. These developments mostly took place in the Middle East, Central Asia, Al-Andalus, and North Africa, and...
provide the most complete historical descriptions of this supernova.

The Egypt
Egypt
Egypt , officially the Arab Republic of Egypt, Arabic: , is a country mainly in North Africa, with the Sinai Peninsula forming a land bridge in Southwest Asia. Egypt is thus a transcontinental country, and a major power in Africa, the Mediterranean Basin, the Middle East and the Muslim world...
ian Arabic astrologer and astronomer Ali ibn Ridwan
Ali ibn Ridwan
Abu'l Hasan Ali ibn Ridwan Al-Misri was an Egyptian Muslim physician, astrologer and astronomer, born in Giza.He was a commentator on ancient Greek medicine, and in particular on Galen; his commentary on Galen's Ars Parva was translated by Gerardo Cremonese...
, writing in a commentary on Ptolemy
Ptolemy
Claudius Ptolemy , was a Roman citizen of Egypt who wrote in Greek. He was a mathematician, astronomer, geographer, astrologer, and poet of a single epigram in the Greek Anthology. He lived in Egypt under Roman rule, and is believed to have been born in the town of Ptolemais Hermiou in the...
's Tetrabiblos, stated that the "...spectacle was a large circular body, 2-1/2 to 3 times as large as Venus
Venus
Venus is the second planet from the Sun, orbiting it every 224.7 Earth days. The planet is named after Venus, the Roman goddess of love and beauty. After the Moon, it is the brightest natural object in the night sky, reaching an apparent magnitude of −4.6, bright enough to cast shadows...
. The sky was shining because of its light. The intensity of its light was a little more than a quarter that of Moon
Moon
The Moon is Earth's only known natural satellite,There are a number of near-Earth asteroids including 3753 Cruithne that are co-orbital with Earth: their orbits bring them close to Earth for periods of time but then alter in the long term . These are quasi-satellites and not true moons. For more...
light." Like all other observers, Ali ibn Ridwan noted that the new star was low on the southern horizon. Monks at the Benedictine abbey at St. Gallen provide independent data as to its magnitude and location in the sky, writing that "[i]n a wonderful manner this was sometimes contracted, sometimes diffused, and moreover sometimes extinguished....It was seen likewise for three months in the inmost limits of the south, beyond all the constellations which are seen in the sky". This description is often taken as anecdotal evidence that the supernova was of Type Ia
Type Ia supernova
A Type Ia supernova is a sub-category of supernovae, which in turn are a sub-category of cataclysmic variable stars, that results from the violent explosion of a white dwarf star. A white dwarf is the remnant of a star that has completed its normal life cycle and has ceased nuclear fusion...
. Some sources state that the star was bright enough to cast shadows; it was certainly seen during daylight hours for some time, and the modern-day astronomer Frank Winkler
Frank Winkler
P. Frank Winkler is an astronomer and noted subject matter expert on supernova. He received his doctorate from Harvard and is currently the Gamaliel Painter Bicentennial Professor in Physics at Middlebury College located in Middlebury, Vermont.Dr...
has said that "in the spring of 1006, people could probably have read manuscripts at midnight by its light."

The reports from Switzerland are particularly noteworthy, as the supernova would have been very low in the sky there, rising to at most 5 degrees above the southern horizon and being visible for only 4–5 hours at a time. Atmospheric extinction
Extinction (astronomy)
Extinction is a term used in astronomy to describe the absorption and scattering of electromagnetic radiation by matter between an emitting astronomical object and the observer. Interstellar extinction—also called Galactic extinction, when it occurs in the Milky Way—was first...
and the need to find a site with a clear southern horizon make seeing even bright objects this low difficult; the "sometimes contracted, diffused, extinguished" remarks quoted above hint at atmospheric effects caused by the low apparent altitude of the object.

By December, it was again sighted in the constellation Di. The Chinese astrologer
Astrologer
An astrologer practices one or more forms of astrology. Typically an astrologer draws a horoscope for the time of an event, such as a person's birth, and interprets celestial points and their placements at the time of the event to better understand someone, determine the auspiciousness of an...
Zhou Keming, who was on his return to Kaifeng
Kaifeng
Kaifeng , known previously by several names , is a prefecture-level city in east-central Henan province, Central China. Nearly 5 million people live in the metropolitan area...
from his duty in Guangdong
Guangdong
Guangdong is a province on the South China Sea coast of the People's Republic of China. The province was previously often written with the alternative English name Kwangtung Province...
, interpreted the star to the emperor on May 30 as an auspicious star, yellow in color and brilliant in its brightness, that would bring great prosperity to the state over which it appeared.

There appear to have been two distinct phases in the early evolution of this supernova. There was first a three-month period at which it was at its brightest; after this period it diminished, then returned for a period of about eighteen months. Most astrologers interpreted the event as a portent of warfare and famine.

A petroglyph
Petroglyph
Petroglyphs are pictogram and logogram images created by removing part of a rock surface by incising, picking, carving, and abrading. Outside North America, scholars often use terms such as "carving", "engraving", or other descriptions of the technique to refer to such images...
by the Hohokam
Hohokam
Hohokam is one of the four major prehistoric archaeological Oasisamerica traditions of what is now the American Southwest. Many local residents put the accent on the first syllable . Variant spellings in current, official usage include Hobokam, Huhugam and Huhukam...
in White Tank Mountain Regional Park
White Tank Mountain Regional Park
The White Tank Mountain Regional Park is a large regional park located in west-central Maricopa County, Arizona. Encompassing of desert and mountain landscape, it is the largest regional park in the county...
Maricopa County, Arizona, has been interpreted as the first known North American representation of the supernova.