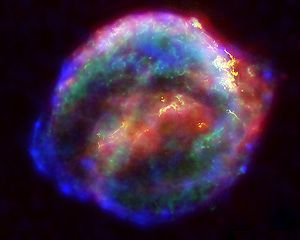 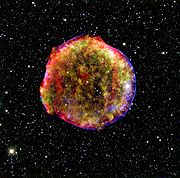 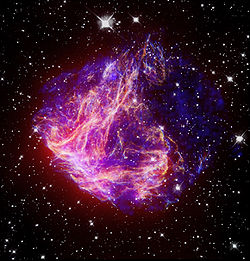 A supernova remnant is the structure resulting from the explosion of a star
Star
A star is a massive, luminous sphere of plasma held together by gravity. At the end of its lifetime, a star can also contain a proportion of degenerate matter. The nearest star to Earth is the Sun, which is the source of most of the energy on Earth...
in a supernova
Supernova
A supernova is a stellar explosion that is more energetic than a nova. It is pronounced with the plural supernovae or supernovas. Supernovae are extremely luminous and cause a burst of radiation that often briefly outshines an entire galaxy, before fading from view over several weeks or months...
. The supernova remnant is bounded by an expanding shock wave
Shock wave
A shock wave is a type of propagating disturbance. Like an ordinary wave, it carries energy and can propagate through a medium or in some cases in the absence of a material medium, through a field such as the electromagnetic field...
, and consists of ejected material expanding from the explosion, and the interstellar material it sweeps up and shocks along the way.

There are two possible routes to a supernova: either a massive star may run out of fuel, ceasing to generate fusion energy in its core, and collapsing inward under the force of its own gravity to form a neutron star
Neutron star
A neutron star is a type of stellar remnant that can result from the gravitational collapse of a massive star during a Type II, Type Ib or Type Ic supernova event. Such stars are composed almost entirely of neutrons, which are subatomic particles without electrical charge and with a slightly larger...
or a black hole
Black hole
A black hole is a region of spacetime from which nothing, not even light, can escape. The theory of general relativity predicts that a sufficiently compact mass will deform spacetime to form a black hole. Around a black hole there is a mathematically defined surface called an event horizon that...
; or a white dwarf
White dwarf
A white dwarf, also called a degenerate dwarf, is a small star composed mostly of electron-degenerate matter. They are very dense; a white dwarf's mass is comparable to that of the Sun and its volume is comparable to that of the Earth. Its faint luminosity comes from the emission of stored...
star may accumulate (accrete
Accretion (astrophysics)
In astrophysics, the term accretion is used for at least two distinct processes.The first and most common is the growth of a massive object by gravitationally attracting more matter, typically gaseous matter in an accretion disc. Accretion discs are common around smaller stars or stellar remnants...
) material from a companion star until it reaches a critical mass and undergoes a thermonuclear explosion.

In either case, the resulting supernova explosion expels much or all of the stellar material with velocities as much as 10% the speed of light, that is, about 30,000 km/s. These ejecta are highly supersonic: assuming a typical temperature of the interstellar medium of 10,000 K, the Mach number
Mach number
Mach number is the speed of an object moving through air, or any other fluid substance, divided by the speed of sound as it is in that substance for its particular physical conditions, including those of temperature and pressure...
can initially be > 1000. Therefore, a strong shock wave
Shock wave
A shock wave is a type of propagating disturbance. Like an ordinary wave, it carries energy and can propagate through a medium or in some cases in the absence of a material medium, through a field such as the electromagnetic field...
forms ahead of the ejecta, that heats the upstream plasma
Plasma (physics)
In physics and chemistry, plasma is a state of matter similar to gas in which a certain portion of the particles are ionized. Heating a gas may ionize its molecules or atoms , thus turning it into a plasma, which contains charged particles: positive ions and negative electrons or ions...
up to temperatures well above millions of K. The shock continuously slows down over time as it sweeps up the ambient medium, but it can expand over hundreds of thousands of years and over tens of parsecs
Parsec
The parsec is a unit of length used in astronomy. It is about 3.26 light-years, or just under 31 trillion kilometres ....
before its speed falls below the local sound speed.

One of the best observed young supernova remnants was formed by SN 1987A
SN 1987A
SN 1987A was a supernova in the outskirts of the Tarantula Nebula in the Large Magellanic Cloud, a nearby dwarf galaxy. It occurred approximately 51.4 kiloparsecs from Earth, approximately 168,000 light-years, close enough that it was visible to the naked eye. It could be seen from the Southern...
, a supernova in the Large Magellanic Cloud
Large Magellanic Cloud
The Large Magellanic Cloud is a nearby irregular galaxy, and is a satellite of the Milky Way. At a distance of slightly less than 50 kiloparsecs , the LMC is the third closest galaxy to the Milky Way, with the Sagittarius Dwarf Spheroidal and Canis Major Dwarf Galaxy lying closer to the center...
that was observed in February 1987. Other well-known supernova remnants include the Crab Nebula
Crab Nebula
The Crab Nebula  is a supernova remnant and pulsar wind nebula in the constellation of Taurus...
, Tycho, the remnant of SN 1572
SN 1572
SN 1572 , "B Cassiopeiae" , or 3C 10 was a supernova of Type Ia in the constellation Cassiopeia, one of about eight supernovae visible to the naked eye in historical records...
, named after Tycho Brahe
Tycho Brahe
Tycho Brahe , born Tyge Ottesen Brahe, was a Danish nobleman known for his accurate and comprehensive astronomical and planetary observations...
who recorded the brightness of its original explosion, and Kepler, the remnant of SN 1604
SN 1604
Supernova 1604, also known as Kepler's Supernova, Kepler's Nova or Kepler's Star, was a supernova that occurred in the Milky Way, in the constellation Ophiuchus. , it is the last supernova to have been unquestionably observed in our own galaxy, occurring no farther than 6 kiloparsecs or about...
, named after Johannes Kepler
Johannes Kepler
Johannes Kepler was a German mathematician, astronomer and astrologer. A key figure in the 17th century scientific revolution, he is best known for his eponymous laws of planetary motion, codified by later astronomers, based on his works Astronomia nova, Harmonices Mundi, and Epitome of Copernican...
. The youngest known remnant in our galaxy is G1.9+0.3
Supernova remnant G1.9+0.3
Supernova remnant G1.9+0.3 is the youngest known supernova remnant in the Milky Way Galaxy. The remnant's young age was established by combining data from NASA's Chandra X-ray Observatory and the VLA radio observatory, and is believed to have exploded about 25,000 years ago, and the signal began...
, discovered in the galactic center.

An SNR passes through the following stages as it expands:

There are three types of supernova remnant: 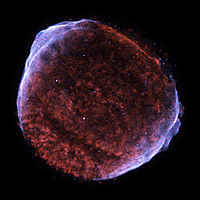 Supernova remnants are considered the major source of galactic cosmic ray
Galactic cosmic ray
Galactic cosmic rays are cosmic rays that have their origin inside our Galaxy. GCRs are high-energy charged particles, and are usually protons, electrons, and fully ionized nuclei of light elements...
s.
The connection between cosmic rays and supernovas was first suggested by Walter Baade
Walter Baade
Wilhelm Heinrich Walter Baade was a German astronomer who worked in the USA from 1931 to 1959.-Biography:He took advantage of wartime blackout conditions during World War II, which reduced light pollution at Mount Wilson Observatory, to resolve stars in the center of the Andromeda galaxy for the...
and Fritz Zwicky
Fritz Zwicky
Fritz Zwicky was a Swiss astronomer. He worked most of his life at the California Institute of Technology in the United States of America, where he made many important contributions in theoretical and observational astronomy.- Biography :Fritz Zwicky was born in Varna, Bulgaria to a Swiss father....
in 1934.
Vitaly Ginzburg
Vitaly Ginzburg
Vitaly Lazarevich Ginzburg ForMemRS was a Soviet theoretical physicist, astrophysicist, Nobel laureate, a member of the Russian Academy of Sciences and one of the fathers of Soviet hydrogen bomb...
and Sergei Syrovatskii in 1964 remarked that if the efficiency of cosmic ray acceleration
in supernova remnants is about 10 percent, the cosmic ray losses of the Milky Way are compensated.
This hypothesis is supported by a specific mechanism called "shock wave acceleration" based on Enrico Fermi
Enrico Fermi
Enrico Fermi was an Italian-born, naturalized American physicist particularly known for his work on the development of the first nuclear reactor, Chicago Pile-1, and for his contributions to the development of quantum theory, nuclear and particle physics, and statistical mechanics...
's ideas, which is still under development.

Indeed, Enrico Fermi
Enrico Fermi
Enrico Fermi was an Italian-born, naturalized American physicist particularly known for his work on the development of the first nuclear reactor, Chicago Pile-1, and for his contributions to the development of quantum theory, nuclear and particle physics, and statistical mechanics...
proposed in 1949 a model for the acceleration of cosmic rays through particle collisions with magnetic clouds in the interstellar medium
Interstellar medium
In astronomy, the interstellar medium is the matter that exists in the space between the star systems in a galaxy. This matter includes gas in ionic, atomic, and molecular form, dust, and cosmic rays. It fills interstellar space and blends smoothly into the surrounding intergalactic space...
. This process, known as the "Second Order Fermi Mechanism
Fermi acceleration
Fermi acceleration , sometimes referred to as diffusive shock acceleration , is the acceleration that charged particles undergo when being repeatedly reflected, usually by a magnetic mirror. This is thought to be the primary mechanism by which particles gain non thermal energies in astrophysical...
", increases particle energy during head-on collisions, resulting in a steady gain in energy. A later model to produce Fermi Acceleration was generated by a powerful shock front moving through space. Particles that repeatedly cross the front of the shock can gain significant increases in energy. This became known as the "First Order Fermi Mechanism".

Supernova remnants can provide the energetic shock fronts required to generate ultra-high energy cosmic rays. Observation of the SN 1006
SN 1006
SN 1006 was a supernova, widely seen on Earth beginning in the year 1006 AD; Earth was about 7,200 light-years away from the supernova. It was the brightest apparent magnitude stellar event in recorded history reaching an estimated -7.5 visual magnitude...
remnant in the X-ray has shown synchrotron emission consistent with it being a source of cosmic rays. However, for energies higher than about 1015 eV a different mechanism is required as supernova remnants cannot provide sufficient energy.