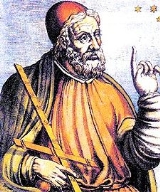 Overview
Claudius Ptolemy was a Roman citizen
Roman citizenship
Citizenship in ancient Rome was a privileged political and legal status afforded to certain free-born individuals with respect to laws, property, and governance....
of Egypt who wrote in Greek
Greek literature
Greek literature refers to writings composed in areas of Greek influence, typically though not necessarily in one of the Greek dialects, throughout the whole period in which the Greek-speaking people have existed.-Ancient Greek literature :...
. He was a mathematician
Mathematician
A mathematician is a person whose primary area of study is the field of mathematics. Mathematicians are concerned with quantity, structure, space, and change....
, astronomer
Astronomer
An astronomer is a scientist who studies celestial bodies such as planets, stars and galaxies.Historically, astronomy was more concerned with the classification and description of phenomena in the sky, while astrophysics attempted to explain these phenomena and the differences between them using...
, geographer
Geographer
A geographer is a scholar whose area of study is geography, the study of Earth's natural environment and human society.Although geographers are historically known as people who make maps, map making is actually the field of study of cartography, a subset of geography...
, astrologer
Astrologer
An astrologer practices one or more forms of astrology. Typically an astrologer draws a horoscope for the time of an event, such as a person's birth, and interprets celestial points and their placements at the time of the event to better understand someone, determine the auspiciousness of an...
, and poet of a single epigram in the Greek Anthology
Greek Anthology
The Greek Anthology is a collection of poems, mostly epigrams, that span the classical and Byzantine periods of Greek literature...
. He lived in Egypt
Egypt
Egypt , officially the Arab Republic of Egypt, Arabic: , is a country mainly in North Africa, with the Sinai Peninsula forming a land bridge in Southwest Asia. Egypt is thus a transcontinental country, and a major power in Africa, the Mediterranean Basin, the Middle East and the Muslim world...
under Roman rule, and is believed to have been born in the town of Ptolemais Hermiou
Ptolemais Hermiou
Ptolemais Hermiou was a city in Greco-Roman Egypt, established on the west bank of the Nile by Ptolemy I Soter to be the capital of Upper Egypt. Today, the city of Al Manshah in the Sohag Governorate is located where the ancient city used to be....
in the Thebaid
Thebaid
The Thebaid or Thebais is the region of ancient Egypt containing the thirteen southernmost nomes of Upper Egypt, from Abydos to Aswan. It acquired its name from its proximity to the ancient Egyptian capital of Thebes....
. This theory, proposed by Theodore Meliteniotes
Theodore Meliteniotes
Theodore Meliteniotes , was a Byzantine Greek astronomer, a sakellarios in the Byzantine bureaucracy, a supporter of Gregory Palamas and an opponent of the reunion with the Catholic Church. He became didaskalos ton didaskalon, i.e...
, could be correct, but it is late (ca. 1360) and unsupported. There is no reason to suppose that he ever lived anywhere else than Alexandria
Alexandria
Alexandria is the second-largest city of Egypt, with a population of 4.1 million, extending about along the coast of the Mediterranean Sea in the north central part of the country; it is also the largest city lying directly on the Mediterranean coast. It is Egypt's largest seaport, serving...
, where he died around AD 168.

Ptolemy was the author of several scientific treatises, at least three of which were of continuing importance to later Islamic
Islamic science
Science in the medieval Islamic world, also known as Islamic science or Arabic science, is the science developed and practised in the Islamic world during the Islamic Golden Age . During this time, Indian, Iranian and especially Greek knowledge was translated into Arabic...
and Europe
Europe
Europe is, by convention, one of the world's seven continents. Comprising the westernmost peninsula of Eurasia, Europe is generally 'divided' from Asia to its east by the watershed divides of the Ural and Caucasus Mountains, the Ural River, the Caspian and Black Seas, and the waterways connecting...
an science.

When Ptolemy's Geography was rediscovered the map-making profession was
More

The length of life takes the leading place among inquiries about events following birth.

As material fortune is associated with the properties of the body, so honor belongs to those of the soul.

There are three classes of friendship and enmity, since men are so disposed to one another either by preference or by need or through pleasure and pain.