Encyclopedia
The ROC Army's current operational strength includes 3 armies
Army
An army An army An army (from Latin arma "arms, weapons" via Old French armée, "armed" (feminine), in the broadest sense, is the land-based military of a nation or state. It may also include other branches of the military such as the air force via means of aviation corps...
, 5 corps
Corps
A corps is either a large formation, or an administrative grouping of troops within an armed force with a common function such as Artillery or Signals representing an arm of service...
. As of 2005, the Army's 35 brigade
Brigade
A brigade is a major tactical military formation that is typically composed of two to five battalions, plus supporting elements depending on the era and nationality of a given army and could be perceived as an enlarged/reinforced regiment...
s include 25 infantry
Infantry
Infantrymen are soldiers who are specifically trained for the role of fighting on foot to engage the enemy face to face and have historically borne the brunt of the casualties of combat in wars. As the oldest branch of combat arms, they are the backbone of armies...
brigades, 5 armoured brigades and 3 mechanized infantry
Mechanized infantry
Mechanized infantry are infantry equipped with armored personnel carriers , or infantry fighting vehicles for transport and combat ....
brigades. All infantry brigades stood down and transferred to Reserve Command after 2005.

This update reflects the ROCA ORBAT at the conclusion of the Jinjing Restructuring Plan in 2008.

A new type of units called defense team (守備隊) is being introduced. These are formed by elements of de-activated brigades under each area defense commands. The strength of a defense group may vary from one or more reinforced battalions, making it roughly equal to a regiment. The team CO is usually a full colonel.

With the downsizing of ROC armed forces in recent years, the Army has endured the largest number of cutbacks as ROC military doctrine has begun to emphasize the importance of offshore engagement with the Navy and Air Force; subsequent to this shift in emphasis, the ROC Navy and Air Force have taken precedence over the ROC Army in defense doctrine and weapons' procurement. Recent short term goals in the Army include acquisition and development of joint command and control systems, advanced attack helicopters and armored vehicles, MLRS and field air defense systems. The Army is also in the process of transitioning to an all volunteer force. 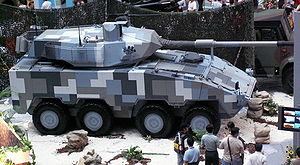 From the 1990s onwards, the Republic of China Army launched several upgrade programmes to replace out-dated equipment with cutting-edge state of the art
State of the art
The state of the art is the highest level of development, as of a device, technique, or scientific field, achieved at a particular time. It also refers to the level of development reached at any particular time as a result of the latest methodologies employed.- Origin :The earliest use of the term...
advanced
AdvancED
AdvancED is a private organization that accredits primary and secondary schools throughout the United States. The organization is based in Georgia. AdvanceED was formed in 2006 by the consolidation of the pre-college divisions of two of the U.S...
weapons, also increasing its emphasis on forces that could be rapidly deployed and were suited for combat in Taiwan's heavily urbanized environment. Orders were placed with the United States for M60A3 Patton tanks, M109A6 "Paladin" howitzers and AH-1W SuperCobra attack helicopters, as well as updating existing equipment.

Along with the other ROC military branches, the ROC Army has extensive experience in the construction and utilization of underground tunnels and bases gained during the People's Republic of China's bombardments of Kinmen
Kinmen
Kinmen , also known as Quemoy , is a small archipelago of several islands administered by the Republic of China : Greater Kinmen, Lesser Kinmen, and some islets. Administratively, it is Kinmen County of Fujian Province, ROC. The county is claimed by the People's Republic of China as part of its...
and Matsu
Matsu Islands
The Matsu Islands are a minor archipelago of 19 islands and islets in the Taiwan Strait administered as Lienchiang County , Fujian Province of the Republic of China . Only a small area of what is historically Lienchiang County is under the control of the ROC...
during the Cold War and many facilities are rumoured to be located underground in undisclosed locations.

In July 2007 it was reported that the ROC Army would request the purchase of 30 AH-64D Apache Longbow attack helicopters from in the 2008 defence budget. The 2008 defense budget also listed a request for 60 UH-60M Black Hawk helicopters as a partial replacement for the UH-1Hs currently in service. It has been reported that the ROC Army will seek new third generation main battle tanks, as the M60A3s are aging. The possible tanks under consideration are the US M1A2, UK Challenger, German Leopard 2A6, French Le Clerc and the Israeli Merkava. However it is expected to procure the US M1A2 due to closer military ties.

The U.S. government announced on October 3 that it plans to sell $6.5 billion dollars worth of arms to Taiwan ending the freeze of arms sales to Taiwan. Amongst other things, the plans include $2.532 billion dollars worth of 30 AH-64D Apache Longbow Block III Attack helicopters with night-vision sensors, radar, 173 Stinger Block I air-to-air missiles and 1000 AGM-114L Hellfire missiles. and 182 Javelin missiles will also be available with 20 Javelin command launchers and is estimated to cost $47 million.

1-29-2010, US government announced 5 notifications to US Congress for arms sales to Taiwan. Of the total 6.392 billion US dollars in the 5 announcements, ROC Army will received 60 UH-60M and other related things for cost of 3.1 Billion.

On August 31, 2010, it was announced for next year's defense budget, ROCA plan for next generation MBT has been put on hold, due to lack of budget.