Encyclopedia
The 155 mm Gun M1 and M2 (later M59), widely known as Long Tom, were 155 millimeter calibre field gun
Field gun
A field gun is an artillery piece. Originally the term referred to smaller guns that could accompany a field army on the march and when in combat could be moved about the battlefield in response to changing circumstances, as to opposed guns installed in a fort, or to siege cannon or mortars which...
s used by the United States
United States
The United States of America is a federal constitutional republic comprising fifty states and a federal district...
armed forces during World War II
World War II
World War II, or the Second World War , was a global conflict lasting from 1939 to 1945, involving most of the world's nations—including all of the great powers—eventually forming two opposing military alliances: the Allies and the Axis...
and Korean War
Korean War
The Korean War was a conventional war between South Korea, supported by the United Nations, and North Korea, supported by the People's Republic of China , with military material aid from the Soviet Union...
. The Long Tom replaced the Canon de 155 mm GPF in United States service.

Before entering World War I
World War I
World War I , which was predominantly called the World War or the Great War from its occurrence until 1939, and the First World War or World War I thereafter, was a major war centred in Europe that began on 28 July 1914 and lasted until 11 November 1918...
, the United States was poorly equipped with heavy artillery. To address this problem a number of foreign heavy artillery guns were adopted, including the Canon de 155 mm GPF. After the end of the war development work began in the United States on a design to improve upon the existing models of heavy gun and carriage. A number of prototypes were produced in the 1920s and 1930s, but the projects were put on hold due to lack of funds. In 1938 the 155 mm Gun T4 on Carriage T2 was finally adopted as 155 mm gun M1 on Carriage M1.

The new design used a barrel broadly similar to the earlier 155 mm GPF, but with an Asbury breech. The new split-trail carriage featured four roadwheels, each mounting two tires. The wheels could be lifted, allowing the gun to rest on a firing platform. This made the gun very stable and thus accurate.

The gun was developed into M1A1 and M2 variants. After World War II, the United States Army re-organized, and the gun was redesignated as the M59.

The Long Tom saw combat for the first time in North African Campaign
North African campaign
During the Second World War, the North African Campaign took place in North Africa from 10 June 1940 to 13 May 1943. It included campaigns fought in the Libyan and Egyptian deserts and in Morocco and Algeria and Tunisia .The campaign was fought between the Allies and Axis powers, many of whom had...
on December 24, 1942, with "A" Battery of the 36th Field Artillery Battalion. Eventually it equipped about 49 battalion
Battalion
A battalion is a military unit of around 300–1,200 soldiers usually consisting of between two and seven companies and typically commanded by either a Lieutenant Colonel or a Colonel...
s, including 40 in the European Theater
European Theatre of World War II
The European Theatre of World War II was a huge area of heavy fighting across Europe from Germany's invasion of Poland on September 1, 1939 until the end of the war with the German unconditional surrender on May 8, 1945...
and 7 in the Pacific
Pacific War
The Pacific War, also sometimes called the Asia-Pacific War refers broadly to the parts of World War II that took place in the Pacific Ocean, its islands, and in East Asia, then called the Far East...
. The preferable prime mover
Artillery tractor
Artillery tractor is a kind of tractor, also referred to as a gun tractor, a vehicle used to tow artillery pieces of varying weights.-Traction:...
was initially the Mack
Mack Trucks
Mack Trucks is an American truck-manufacturing company and a former manufacturer of buses and trolley buses. A wholly owned subsidiary of Renault Véhicules Industriels since 1990, Mack Trucks is currently a subsidiary of AB Volvo. The company's headquarters are located in Greensboro, North Carolina...
NO 6x6 7½ ton truck; from 1943 on it was replaced by the tracked M4 High Speed Tractor
M4 Tractor
-Design and development:The M4 was based on the chassis and drive train of the obsolescent M2 Light Tank. This common practice of re-using old vehicles simplified design, allowed for easy production, and made maintenance in the field easier....
. 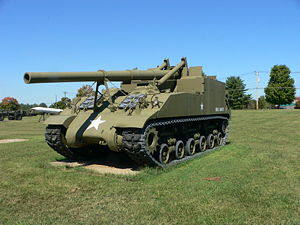 The gun was also mounted on a modified M4 medium tank
M4 Sherman
The M4 Sherman, formally Medium Tank, M4, was the primary tank used by the United States during World War II. Thousands were also distributed to the Allies, including the British Commonwealth and Soviet armies, via lend-lease...
chassis, in mount M13. The resulting vehicle was initially designated 155 mm Gun Motor Carriage T83 and eventually standardized as 155 mm Gun Motor Carriage M40.

155 mm Gun Motor Carriage T79, based on T23 Medium Tank
M26 Pershing
The Heavy Tank M26 Pershing was an American heavy tank briefly used in World War II and in the Korean War. It was named after General John Pershing, who led the American Expeditionary Force in Europe in World War I....
chassis, never advanced past proposal stage.

The gun utilized separate loading, bagged charge ammunition. The propelling charge consisted of base (9.23 kg) and increment (4.69 kg). The data in the table below is for supercharge (base and increment).