Encyclopedia
The Benelli M4 Super 90 is an Italian
Italy
Italy , officially the Italian Republic languages]] under the European Charter for Regional or Minority Languages. In each of these, Italy's official name is as follows:;;;;;;;;), is a unitary parliamentary republic in South-Central Europe. To the north it borders France, Switzerland, Austria and...
semi-automatic shotgun
Semi-automatic shotgun
A semi-automatic shotgun is a form of shotgun that is able to fire a cartridge after every trigger squeeze, without any manual chambering of another round being required...
manufactured by Benelli Armi S.P.A.
Benelli (firearms)
Benelli Armi SpA is an Italian firearm manufacturer founded in 1967, located in Urbino, Italy, best known for high quality shotguns used by military, law enforcement and civilians all over the world. Particularly famous is the Benelli M3 12 gauge, used extensively by American SWAT teams...

On May 4, 1998, the U.S. Army Armaments Research, Development and Engineering Center (ARDEC) at Picatinny Arsenal
Picatinny Arsenal
The Picatinny Arsenal is an American military research and manufacturing facility located on a lot in northern New Jersey near Lake Denmark. The Arsenal is the headquarters of the United States Army Armament Research, Development and Engineering Center...
, NJ
New Jersey
New Jersey is a state in the Northeastern and Middle Atlantic regions of the United States. , its population was 8,791,894. It is bordered on the north and east by the state of New York, on the southeast and south by the Atlantic Ocean, on the west by Pennsylvania and on the southwest by Delaware...
issued Solicitation #DAAE30-98-R-0401, requesting submissions for a new 12 gauge
Gauge (bore diameter)
The gauge of a firearm is a unit of measurement used to express the diameter of the barrel. Gauge is determined from the weight of a solid sphere of lead that will fit the bore of the firearm, and is expressed as the multiplicative inverse of the sphere's weight as a fraction of a pound . Thus...
, semi-automatic
Semi-automatic shotgun
A semi-automatic shotgun is a form of shotgun that is able to fire a cartridge after every trigger squeeze, without any manual chambering of another round being required...
combat shotgun
Combat shotgun
A combat shotgun is a shotgun that is intended for use in an offensive role, typically by a military force. The earliest shotguns specifically designed for combat were the trench guns or trench shotguns issued in World War I...
for the US Armed Services
United States armed forces
The United States Armed Forces are the military forces of the United States. They consist of the Army, Navy, Marine Corps, Air Force, and Coast Guard.The United States has a strong tradition of civilian control of the military...
. In response to the request, Benelli Armi SpA
Benelli (firearms)
Benelli Armi SpA is an Italian firearm manufacturer founded in 1967, located in Urbino, Italy, best known for high quality shotguns used by military, law enforcement and civilians all over the world. Particularly famous is the Benelli M3 12 gauge, used extensively by American SWAT teams...
of Urbino
Urbino
Urbino is a walled city in the Marche region of Italy, south-west of Pesaro, a World Heritage Site notable for a remarkable historical legacy of independent Renaissance culture, especially under the patronage of Federico da Montefeltro, duke of Urbino from 1444 to 1482...
, Italy designed and built the Benelli M4 Super 90 Combat Shotgun. On August 4, 1998, five samples of the M4 were delivered to Aberdeen Proving Ground
Aberdeen Proving Ground
Aberdeen Proving Ground is a United States Army facility located near Aberdeen, Maryland, . Part of the facility is a census-designated place , which had a population of 3,116 at the 2000 census.- History :...
, Maryland
Maryland
Maryland is a U.S. state located in the Mid Atlantic region of the United States, bordering Virginia, West Virginia, and the District of Columbia to its south and west; Pennsylvania to its north; and Delaware to its east...
, and after intense testing, the M4 had beaten the competition. In early 1999, ARDEC awarded the M1014 Joint Service Combat Shotgun contract to Heckler & Koch
Heckler & Koch
Heckler & Koch GmbH is a German defense manufacturing company that produces various small arms. Some of their products include the SA80, MP5 submachine gun, G3 automatic rifle, the G36 assault rifle, the HK 416, the MP7 personal defense weapon, the USP series of handguns, and the high-precision...
, USA subsidiary for importation of the Benelli M4 Combat Shotgun. The first units (count of 20,000) were delivered to the United States Marine Corps
United States Marine Corps
The United States Marine Corps is a branch of the United States Armed Forces responsible for providing power projection from the sea, using the mobility of the United States Navy to deliver combined-arms task forces rapidly. It is one of seven uniformed services of the United States...
in 1999. During testing, the prototype was named XM1014, but after adoption, the 'X' was dropped, and the weapon was officially designated the M1014.

The M4 was the first gas-operated shotgun produced by Benelli. Its function is designed around an entirely new method called the "auto regulating gas operated" (ARGO) system. The ARGO system on the M4 opened the door for Benelli's development of the R1 rifle line. The design uses two stainless-steel
Stainless steel
In metallurgy, stainless steel, also known as inox steel or inox from French "inoxydable", is defined as a steel alloy with a minimum of 10.5 or 11% chromium content by mass....
self-cleaning piston
Piston
A piston is a component of reciprocating engines, reciprocating pumps, gas compressors and pneumatic cylinders, among other similar mechanisms. It is the moving component that is contained by a cylinder and is made gas-tight by piston rings. In an engine, its purpose is to transfer force from...
s located just ahead of the chamber to function opposite the rotating bolt
Firearm action
In firearms terminology, an action is the physical mechanism that manipulates cartridges and/or seals the breech. The term is also used to describe the method in which cartridges are loaded, locked, and extracted from the mechanism. Actions are generally categorized by the type of mechanism used...
, thereby eliminating the need for the complex mechanisms found on other gas-actuated automatics. Benelli accomplishes this level of reliability through the simplicity of the mechanism. The ARGO is a short-stroke system that incorporates only four parts. It consists of two symmetrical shrouds containing two small steel gas pistons.

It is also self-regulating for cartridges of varying length and power levels. It can fire 2.75 and 3 inches (76.2 mm) shells
Shell (projectile)
A shell is a payload-carrying projectile, which, as opposed to shot, contains an explosive or other filling, though modern usage sometimes includes large solid projectiles properly termed shot . Solid shot may contain a pyrotechnic compound if a tracer or spotting charge is used...
of differing power-levels without any operator adjustments and in any combination. Low-power rounds, such as less-lethal rubber pellets
Rubber bullet
Rubber bullets are rubber or rubber-coated projectiles that can be fired from either standard firearms or dedicated riot guns. They are intended to be a non-lethal alternative to metal projectiles...
, must be cycled manually.

The sights are military-style ghost ring
Iron sight
Iron sights are a system of shaped alignment markers used as a sighting device to assist in the aiming of a device such as a firearm, crossbow, or telescope, and exclude the use of optics as in telescopic sights or reflector sights...
and are adjustable in the field using only a cartridge rim. The MIL-STD-1913 Picatinny sight rail on top allows use of both conventional and night-vision sights, while retaining use of the original sights. 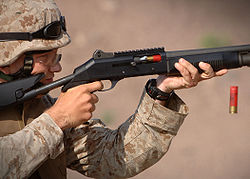 Also touted is the modular assembly basis of the weapon. It allows an operator to exchange the various assembly groups (barrel, buttstock, forearm
Forearm
-See also:*Forearm flexors*Forearm muscles...
, etc...) without the use of tools. Especially useful in the field, the process is quick and allows the weapon to adapt to a changing tactical environment.

Preliminary testing of the M4 puts its reliability at the top of the scale. It can reliably function for at least 25,000 rounds without replacement of any major parts.
The steel components of the weapon feature a matte black phosphated corrosion resistant finish while the aluminum parts are matte hard-anodized. These finishes reduce the weapon's visibility during night operations.

The weapon requires little maintenance and operates in all climates and weather conditions.

The buttstock is collapsible on the M4 Model (designated 11707) but will not collapse on the M1014. This is because the M1014 was manufactured before the U.S. 1994 assault weapon ban expired, whereas the M11707 has been manufactured since the ban expired therefore not subject to the terms under the ban. Collapsing the buttstock shortens the weapon by almost 8 inches, allowing easier storage and transportation; furthermore, it permits better maneuverability around tight corners and over obstacles. The M4 is also available with a fixed stock (pistol grip and semi-pistol grip styles are both available). The M4 is no longer sold today with the skeleton fixed stock (model M11707) to civilians. Benelli only sells the M4 with a fixed pistol grip style tactical stock.

The Rail Interface System or Picatinny rail
Picatinny rail
The Picatinny rail or MIL-STD-1913 rail or STANAG 2324 rail or a "Tactical Rail" is a bracket used on some firearms in order to provide a standardized mounting platform. A similar system is the Weaver rail mount.-Description:...
, built into the top of the shotgun accepts scopes
Telescopic sight
A telescopic sight, commonly called a scope, is a sighting device that is based on an optical refracting telescope. They are equipped with some form of graphic image pattern mounted in an optically appropriate position in their optical system to give an accurate aiming point...
, laser
Laser
A laser is a device that emits light through a process of optical amplification based on the stimulated emission of photons. The term "laser" originated as an acronym for Light Amplification by Stimulated Emission of Radiation...
illuminators, night-vision sights
Night vision goggles
A night vision device is an optical instrument that allows images to be produced in levels of light approaching total darkness. They are most often used by the military and law enforcement agencies, but are available to civilian users...
, and flashlight
Flashlight
A flashlight is a hand-held electric-powered light source. Usually the light source is a small incandescent lightbulb or light-emitting diode...
s. Most modern military firearm
Firearm
A firearm is a weapon that launches one, or many, projectile at high velocity through confined burning of a propellant. This subsonic burning process is technically known as deflagration, as opposed to supersonic combustion known as a detonation. In older firearms, the propellant was typically...
s have similar structures.


Benelli Tactical and the M4

Benelli Tactical is a division of Beretta's Law Enforcement (LE) division. Benelli Tactical manages the sales of all Benelli tactical shotguns to law enforcement, government, and military entities. The M4 shotgun is sold in three configurations: M4 Entry with a 14 in barrel; M4 with a 18.5 in barrel; and M1014, which is an M4 with the "M1014" nomenclature on it for military usage only. M4 shotguns sold through Benelli tactical are available with the collapsible buttstock.
Benelli Tactical and Beretta LE have maintained the belief that the collapsible buttstock, while no longer illegal in the United States, is still only to be made available to law enforcement and government agencies. Benelli Tactical/Beretta LE will not sell these stocks to private individuals. Benelli Tactical does sell the stock piece for retrofitting the pistol grip stock for $150. The stock must be direct-shipped from Italy, however it and other aftermarket stocks are commercially available and not restricted by the United States.