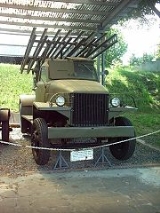 A multiple rocket launcher (MRL) is a type of unguided rocket artillery
Rocket artillery
Rocket artillery is a type of artillery equipped with rocket launchers instead of conventional guns or mortars.Types of rocket artillery pieces include multiple rocket launchers.-History:...
system. Like other rocket
Rocket
A rocket is a missile, spacecraft, aircraft or other vehicle which obtains thrust from a rocket engine. In all rockets, the exhaust is formed entirely from propellants carried within the rocket before use. Rocket engines work by action and reaction...
artillery, multiple rocket launchers are less accurate and have a much lower (sustained) rate of fire than batteries of traditional artillery
Artillery
Originally applied to any group of infantry primarily armed with projectile weapons, artillery has over time become limited in meaning to refer only to those engines of war that operate by projection of munitions far beyond the range of effect of personal weapons...
guns. However, they have the capability of simultaneously dropping many hundreds of kilograms of explosive, with devastating effect.

First developed in 1409, the Korean Hwacha
Hwacha
Hwacha or Hwach'a is the world's first multiple rocket launcher developed and used in Joseon Korea. It had the ability to fire up to 100 steel-tipped rockets, or 200 Singijeon flaming arrow projectiles from a range of 500 yards in multiple salvos...
is the most likely example of the first weapon system with a resemblance to the modern-day multiple rocket launcher. The first modern multiple rocket launcher was the German Nebelwerfer
Nebelwerfer
The Nebelwerfer was a World War II German series of weapons originally designed to deliver chemical weapons. They were initially developed by and assigned to the Wehrmacht's so-called Chemical Troops ...
of the 1930s, a small towed artillery piece. Only later in World War II
World War II
World War II, or the Second World War , was a global conflict lasting from 1939 to 1945, involving most of the world's nations—including all of the great powers—eventually forming two opposing military alliances: the Allies and the Axis...
did the Allies deploy similar weapons in the form of the Land Mattress.

The first self-propelled multiple rocket launchers — and arguably the most famous — were the Soviet
Soviet Union
The Soviet Union , officially the Union of Soviet Socialist Republics , was a constitutionally socialist state that existed in Eurasia between 1922 and 1991....
BM-13 Katyushas, first used during World War II and exported to Soviet allies afterwards. They were simple systems in which a rack of launch rails was mounted on the back of a truck. This set the template for modern multiple rocket launchers. The Americans mounted tubular launchers atop M4 Sherman
M4 Sherman
The M4 Sherman, formally Medium Tank, M4, was the primary tank used by the United States during World War II. Thousands were also distributed to the Allies, including the British Commonwealth and Soviet armies, via lend-lease...
tanks to create the T34 Calliope
T34 Calliope
The Rocket Launcher T34 was a tank-mounted multiple rocket launcher used by the United States Army during World War II. The launcher was placed atop the Medium Tank M4, and fired a barrage of 4.5 in rockets from 60 launch tubes. It was developed in 1943; small numbers were produced and were...
rocket launching tank, only used in small numbers, as their closest equivalent to the Katyusha.