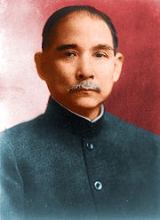 The Chinese people have only family and clan solidarity; they do not have national spirit...they are just a heap of loose sand...Other men are the carving knife and serving dish; we are the fish and the meat.

China is now suffering from poverty, not from unequal distribution of wealth. Where there are inequalities of wealth, the methods of Karl Marx|Marx can, of course, be used; a class war can be advocated to destroy the inequalities. But in China, where industry is not yet developed, Marx's class war and dictatorship of the proletariat are impracticable.

In the construction of a country, it is not the practical workers but the idealists and planners that are difficult to find.