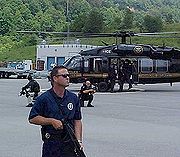 A prison escape or prison break is the act of an inmate
Incarceration
Incarceration is the detention of a person in prison, typically as punishment for a crime .People are most commonly incarcerated upon suspicion or conviction of committing a crime, and different jurisdictions have differing laws governing the function of incarceration within a larger system of...
leaving prison
Prison
A prison is a place in which people are physically confined and, usually, deprived of a range of personal freedoms. Imprisonment or incarceration is a legal penalty that may be imposed by the state for the commission of a crime...
through unofficial or illegal ways. Normally, when this occurs, an effort is made on the part of authorities to recapture them and return them to their original detainers. Escaping from prison is also a criminal offense in many places, and it is highly likely to result in time being added to the inmate's sentence, as well as the inmate being placed under increased security.

In some jurisdictions, such as most U.S. state
U.S. state
A U.S. state is any one of the 50 federated states of the United States of America that share sovereignty with the federal government. Because of this shared sovereignty, an American is a citizen both of the federal entity and of his or her state of domicile. Four states use the official title of...
s, escape from jail or prison is a criminal offense. In Virginia
Virginia
The Commonwealth of Virginia , is a U.S. state on the Atlantic Coast of the Southern United States. Virginia is nicknamed the "Old Dominion" and sometimes the "Mother of Presidents" after the eight U.S. presidents born there...
, for instance, the punishment for escape depends on whether the offender escaped by using force or violence or setting fire
Arson
Arson is the crime of intentionally or maliciously setting fire to structures or wildland areas. It may be distinguished from other causes such as spontaneous combustion and natural wildfires...
to the jail, and the seriousness of the offense for which they were imprisoned. In other jurisdictions, the philosophy of the law holds that it is human nature to want to escape. In Mexico
Mexico
The United Mexican States , commonly known as Mexico , is a federal constitutional republic in North America. It is bordered on the north by the United States; on the south and west by the Pacific Ocean; on the southeast by Guatemala, Belize, and the Caribbean Sea; and on the east by the Gulf of...
, for instance, escapees who do not break any other laws are not charged for anything and no extra time is added to their sentence; however, officers are allowed to shoot prisoners attempting to escape. In Mexico, an escape is illegal if violence is used against prison personnel or property or if prison inmates or officials aid the escape. 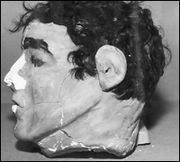