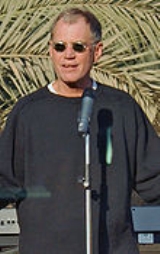 Overview
David Michael Letterman (born April 12, 1947) is an American
People of the United States
The people of the United States, also known as simply Americans or American people, are the inhabitants or citizens of the United States. The United States is a multi-ethnic nation, home to people of different ethnic and national backgrounds...
television host and comedian
Comedian
A comedian or comic is a person who seeks to entertain an audience, primarily by making them laugh. This might be through jokes or amusing situations, or acting a fool, as in slapstick, or employing prop comedy...
. He hosts the late night television
Late night television
Late night television in the United States is the block of television programming airing after 11:00 pm and usually through 2:00 am. Traditionally, this type of programming airs after the late local news and is most notable for being the daypart used for a particular genre of programming that falls...
talk show
Talk show
A talk show or chat show is a television program or radio program where one person discuss various topics put forth by a talk show host....
, Late Show with David Letterman
Late Show with David Letterman
Late Show with David Letterman is a U.S. late-night talk show hosted by David Letterman on CBS. The show debuted on August 30, 1993, and is produced by Letterman's production company, Worldwide Pants Incorporated. The show's music director and band-leader of the house band, the CBS Orchestra, is...
, broadcast on CBS
CBS
CBS Broadcasting Inc. is a major US commercial broadcasting television network, which started as a radio network. The name is derived from the initials of the network's former name, Columbia Broadcasting System. The network is sometimes referred to as the "Eye Network" in reference to the shape of...
. Letterman has been a fixture on late night television since the 1982 debut of Late Night with David Letterman
Late Night with David Letterman
Late Night with David Letterman is a nightly hour-long comedy talk show on NBC that was created and hosted by David Letterman. It premiered in 1982 as the first incarnation of the Late Night franchise and went off the air in 1993, after Letterman left NBC and moved to Late Show on CBS. Late Night...
on NBC
NBC
The National Broadcasting Company is an American commercial broadcasting television network and former radio network headquartered in the GE Building in New York City's Rockefeller Center with additional major offices near Los Angeles and in Chicago...
. Only Letterman's friend and mentor Johnny Carson
Johnny Carson
John William "Johnny" Carson was an American television host and comedian, known as host of The Tonight Show Starring Johnny Carson for 30 years . Carson received six Emmy Awards including the Governor Award and a 1985 Peabody Award; he was inducted into the Television Academy Hall of Fame in 1987...
had a longer late-night hosting career in the United States.

Nothing, believe me, nothing is more satisfying to me personally than getting a great idea and then beatin' it to death.

Now all of us can talk to the National Security Agency|NSA — just by dialing any number.

Nice job… What the hell is U2 supposed to play?