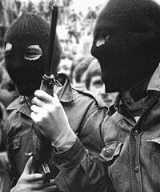 Overview
The Provisional Irish Republican Army (IRA) is an Irish republican
Irish Republicanism
Irish republicanism is an ideology based on the belief that all of Ireland should be an independent republic.In 1801, under the Act of Union, the Kingdom of Great Britain and the Kingdom of Ireland merged to form the United Kingdom of Great Britain and Ireland...
paramilitary
Paramilitary
A paramilitary is a force whose function and organization are similar to those of a professional military, but which is not considered part of a state's formal armed forces....
organisation whose aim was to remove Northern Ireland
Northern Ireland
Northern Ireland is one of the four countries of the United Kingdom. Situated in the north-east of the island of Ireland, it shares a border with the Republic of Ireland to the south and west...
from the United Kingdom and bring about a socialist republic within a united Ireland
United Ireland
A united Ireland is the term used to refer to the idea of a sovereign state which covers all of the thirty-two traditional counties of Ireland. The island of Ireland includes the territory of two independent sovereign states: the Republic of Ireland, which covers 26 counties of the island, and the...
by force of arms and political persuasion. It emerged out of the December 1969 split of the Irish Republican Army
Irish Republican Army (1922–1969)
The original Irish Republican Army fought a guerrilla war against British rule in Ireland in the Irish War of Independence 1919–1921. Following the signing of the Anglo-Irish Treaty on 6 December 1921, the IRA in the 26 counties that were to become the Irish Free State split between supporters and...
over differences of ideology and how to respond to violence against the nationalist community. This violence had followed the community's demands for civil rights
Northern Ireland Civil Rights Association
The Northern Ireland Civil Rights Association was an organisation which campaigned for equal civil rights for the all the people in Northern Ireland during the late 1960s and early 1970s...
in 1968 and 1969, which met with resistance from some of the unionist
Unionism in Ireland
Unionism in Ireland is an ideology that favours the continuation of some form of political union between the islands of Ireland and Great Britain...
community and from the authorities, and culminated in the 1969 Northern Ireland riots
1969 Northern Ireland Riots
During 12–17 August 1969, Northern Ireland was rocked by intense political and sectarian rioting. There had been sporadic violence throughout the year arising from the civil rights campaign, which was demanding an end to government discrimination against Irish Catholics and nationalists...
.

1972    Three car bombs are detonated in Claudy, Northern Ireland, killing nine in what is believed to be a Provisional Irish Republican Army attack.

1978    The Troubles: The Provisional IRA detonates an incendiary bomb at the La Mon restaurant, near Belfast, killing 12 and seriously injuring 30.

1979    An IRA bomb kills British World War II admiral Louis Mountbatten, 1st Earl Mountbatten of Burma and 3 others while they are boating on holiday in Sligo, Republic of Ireland. Another bomb near Warrenpoint, Northern Ireland kills 18 British soldiers.

1979    In Dublin, Ireland, Provisional Irish Republican Army member Thomas McMahon is sentenced to life in prison for the assassination of Lord Mountbatten.

1981    Francis Hughes starves to death in the Maze Prison in a Republican campaign for political prisoner status to be granted to Provisional IRA prisoners.