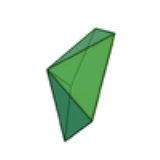 Overview
In geometry
Geometry
Geometry arose as the field of knowledge dealing with spatial relationships. Geometry was one of the two fields of pre-modern mathematics, the other being the study of numbers ....
, a prismatoid is a polyhedron
Polyhedron
In elementary geometry a polyhedron is a geometric solid in three dimensions with flat faces and straight edges...
where all vertices lie in two parallel planes. (If both planes have the same number of vertices
Vertex (geometry)
In geometry, a vertex is a special kind of point that describes the corners or intersections of geometric shapes.-Of an angle:...
,
and the lateral faces are either parallelograms or trapezoids, it is called a prismoid.)

what are the properties of prismatoid?
More
x