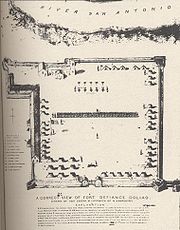 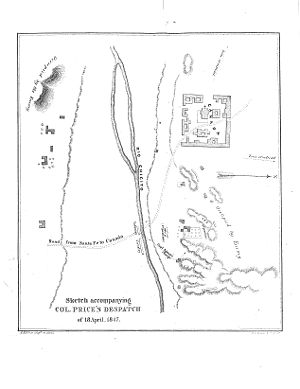 A presidio is a fortified base established by the Spanish
Spain
Spain , officially the Kingdom of Spain languages]] under the European Charter for Regional or Minority Languages. In each of these, Spain's official name is as follows:;;;;;;), is a country and member state of the European Union located in southwestern Europe on the Iberian Peninsula...
in North America
North America
North America is a continent wholly within the Northern Hemisphere and almost wholly within the Western Hemisphere. It is also considered a northern subcontinent of the Americas...
between the sixteenth and nineteenth centuries. The fortresses were built to protect against pirates, hostile native Americans and enemy colonists. Other presidios were held by Spain in the sixteenth and seventeenth centuries, in Italy
Italy
Italy , officially the Italian Republic languages]] under the European Charter for Regional or Minority Languages. In each of these, Italy's official name is as follows:;;;;;;;;), is a unitary parliamentary republic in South-Central Europe. To the north it borders France, Switzerland, Austria and...
, on Elba
Elba
Elba is a Mediterranean island in Tuscany, Italy, from the coastal town of Piombino. The largest island of the Tuscan Archipelago, Elba is also part of the National Park of the Tuscan Archipelago and the third largest island in Italy after Sicily and Sardinia...
and in North Africa
North Africa
North Africa or Northern Africa is the northernmost region of the African continent, linked by the Sahara to Sub-Saharan Africa. Geopolitically, the United Nations definition of Northern Africa includes eight countries or territories; Algeria, Egypt, Libya, Morocco, South Sudan, Sudan, Tunisia, and...
. Later, with independence, the Mexicans garrisoned the Spanish presidios on the northern frontier and followed the same pattern in unsettled frontier regions like the Presidio de Sonoma
Presidio of Sonoma
El Presidio de Sonoma, or Sonoma Barracks, was a military outpost established in Alta California in 1836. It was built to house troops under General Mariano Guadalupe Vallejo, the Commandant of the Northern Frontier, as part of Mexico's strategy to subdue the Native Americans of the Sonoma Valley...
, at Sonoma, California
Sonoma, California
Sonoma is a historically significant city in Sonoma Valley, Sonoma County, California, USA, surrounding its historic town plaza, a remnant of the town's Mexican colonial past. It was the capital of the short-lived California Republic...
and the Presidio de Calabasas
Presidio de Calabasas
The Presidio de Calabasas, also known as Fort Calabasas or Camp Calabasas, was a stone fortress built by Mexico in 1837 near Tumacacori, Arizona...
, in Arizona
Arizona
Arizona ; is a state located in the southwestern region of the United States. It is also part of the western United States and the mountain west. The capital and largest city is Phoenix...
. A short distance outside a presidio, would be a rancho del rey, or kings farm, a tract of land assigned to it to furnish pasturage to the horses and other beasts of burden of the garrison.