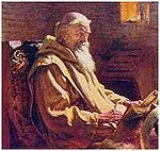 He is well known as an author and scholar, and his most famous work, Historia ecclesiastica gentis Anglorum
Historia ecclesiastica gentis Anglorum
The Historia ecclesiastica gentis Anglorum is a work in Latin by Bede on the history of the Christian Churches in England, and of England generally; its main focus is on the conflict between Roman and Celtic Christianity.It is considered to be one of the most important original references on...
(The Ecclesiastical History of the English People) gained him the title "The Father of English History
History of England
The history of England concerns the study of the human past in one of Europe's oldest and most influential national territories. What is now England, a country within the United Kingdom, was inhabited by Neanderthals 230,000 years ago. Continuous human habitation dates to around 12,000 years ago,...
".

What are some of the themes of the Historia Ecclesiastica?

What are some of his important theological works?