Encyclopedia
Polish Canadians are Citizens
Canadian nationality law
Canadian citizenship is typically obtained by birth in Canada, birth abroad when at least one parent is a Canadian citizen and was born or naturalized in Canada, or by adoption abroad by at least one Canadian citizen. It can also be granted to a permanent resident who lives in Canada for three out...
of Canada
Canada
Canada is a North American country consisting of ten provinces and three territories. Located in the northern part of the continent, it extends from the Atlantic Ocean in the east to the Pacific Ocean in the west, and northward into the Arctic Ocean...
with Polish ancestry, and Poles
Poles
thumb|right|180px|The state flag of [[Poland]] as used by Polish government and diplomatic authoritiesThe Polish people, or Poles , are a nation indigenous to Poland. They are united by the Polish language, which belongs to the historical Lechitic subgroup of West Slavic languages of Central Europe...
who immigrated to Canada
Citizenship and Immigration Canada
Citizenship and Immigration Canada is the department of the government of Canada with responsibility for issues dealing with immigration and citizenship...
from abroad. According to the 2001 census by Statistics Canada
Statistics Canada
Statistics Canada is the Canadian federal government agency commissioned with producing statistics to help better understand Canada, its population, resources, economy, society, and culture. Its headquarters is in Ottawa....
, 984,585 Canadians claim full or partial Polish ancestry.

The earliest Polish immigrants to Canada were members of the Watt and De Meuron military regiments from Saxony and Switzerland sent overseas to help the British Army in North America. Several were émigrés from Poland who took part in the November Uprising of 1830
November Uprising
The November Uprising , Polish–Russian War 1830–31 also known as the Cadet Revolution, was an armed rebellion in the heartland of partitioned Poland against the Russian Empire. The uprising began on 29 November 1830 in Warsaw when the young Polish officers from the local Army of the Congress...
and the 1863 insurrection
January Uprising
The January Uprising was an uprising in the former Polish-Lithuanian Commonwealth against the Russian Empire...
against the Russian occupation
Russian Empire
The Russian Empire was a state that existed from 1721 until the Russian Revolution of 1917. It was the successor to the Tsardom of Russia and the predecessor of the Soviet Union...
of their own homeland.

The first Polish immigrant on record, Dominik Barcz, is known to have come to Canada in 1752. He was a fur merchant from Gdańsk
Gdansk
Gdańsk is a Polish city on the Baltic coast, at the centre of the country's fourth-largest metropolitan area.The city lies on the southern edge of Gdańsk Bay , in a conurbation with the city of Gdynia, spa town of Sopot, and suburban communities, which together form a metropolitan area called the...
who settled in Montreal
Montreal
Montreal is a city in Canada. It is the largest city in the province of Quebec, the second-largest city in Canada and the seventh largest in North America...
. He was followed in 1757 by Charles Blaskowicz, who worked as deputy surveyor-general of lands. In 1776 arrived army surgeon, August Franz Globensky
August Franz Globensky
August Franz Globensky, born August Franciszek Głąbiński , was a Polish physician and one of the founding members of the Polish community in Canada. He was born near Berlin in the Kingdom of Prussia to Joseph Glaubenskindt, a royal notary originally from Poland, and Marie Richter, a German...
. His grandson, Charles Auguste Maximilien Globensky
Charles Auguste Maximilien Globensky
Charles-Auguste-Maximilien Globensky was a writer and politician. C.A.M. Globensky was the grandson of August Franz Globensky, a Hessian surgeon who settled in Verchères, Quebec, and the son of Lieutenant-Colonel Maximilien Globensky.-Career:He was born in Saint-Eustache, Lower Canada and was...
was elected to the House of Commons in Ottawa in 1875. 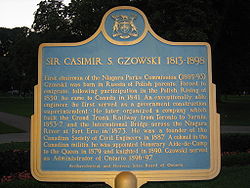 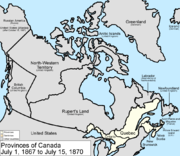 In 1841, Casimir Stanislaus Gzowski
Casimir Gzowski
Sir Kazimierz Stanislaus Gzowski, KCMG , was an engineer who served as acting Lieutenant Governor of Ontario from 1896 to 1897....
arrived in Canada from the partitioned Poland
Partitions of Poland
The Partitions of Poland or Partitions of the Polish–Lithuanian Commonwealth took place in the second half of the 18th century and ended the existence of the Polish–Lithuanian Commonwealth, resulting in the elimination of sovereign Poland for 123 years...
via U.S.A. and for 50 years worked in engineering, military and community sectors in Toronto
Toronto
Toronto is the provincial capital of Ontario and the largest city in Canada. It is located in Southern Ontario on the northwestern shore of Lake Ontario. A relatively modern city, Toronto's history dates back to the late-18th century, when its land was first purchased by the British monarchy from...
and Southern Ontario
Southern Ontario
Southern Ontario is a region of the province of Ontario, Canada that lies south of the French River and Algonquin Park. Depending on the inclusion of the Parry Sound and Muskoka districts, its surface area would cover between 14 to 15% of the province. It is the southernmost region of...
, for which he was knighted by Queen Victoria.

Charles Horecki immigrated in 1872. He was an engineer with the cross-Canada railway construction from Edmonton
Edmonton
Edmonton is the capital of the Canadian province of Alberta and is the province's second-largest city. Edmonton is located on the North Saskatchewan River and is the centre of the Edmonton Capital Region, which is surrounded by the central region of the province.The city and its census...
to the Pacific Ocean through the Peace River Valley. Today, a mountain and a body of water in British Columbia
British Columbia
British Columbia is the westernmost of Canada's provinces and is known for its natural beauty, as reflected in its Latin motto, Splendor sine occasu . Its name was chosen by Queen Victoria in 1858...
are named after him.

The first significant group of Polish group-settlers were Kashubians
Kashubians
Kashubians/Kaszubians , also called Kashubs, Kashubes, Kaszubians, Kassubians or Cassubians, are a West Slavic ethnic group in Pomerelia, north-central Poland. Their settlement area is referred to as Kashubia ....
from Northern Poland, who were escaping Prussian oppression resulting from the occupation
Partitions of Poland
The Partitions of Poland or Partitions of the Polish–Lithuanian Commonwealth took place in the second half of the 18th century and ended the existence of the Polish–Lithuanian Commonwealth, resulting in the elimination of sovereign Poland for 123 years...
. They arrived in Renfrew County of Ontario
Ontario
Ontario is a province of Canada, located in east-central Canada. It is Canada's most populous province and second largest in total area. It is home to the nation's most populous city, Toronto, and the nation's capital, Ottawa....
in 1858, where they founded the settlements of Wilno
Wilno, Ontario
The community of Wilno, Ontario is situated on the border of Killaloe, Hagarty and Richards and Madawaska Valley townships in Renfrew County, Ontario.-Geography:...
, Barry’s Bay
Barry's Bay, Ontario
Barry's Bay is a community in the township of Madawaska Valley, Ontario, Canada, located two hours west of Ottawa on the shores of Kamaniskeg Lake, with a population of approximately 1,300 people...
, and Round Lake (Ontario)
Round Lake (Ontario)
Round Lake is a lake located in Killaloe, Hagarty and Richards Township, Renfrew County, Ontario, Canada. The Bonnechere River flows into the lake in the northwest and flows out of the lake at the southeast....
. By 1890 there were about 270 Kashubian families working in the Madawaska Valley
Madawaska
Madawaska may refer to several places:in Canada*Madawaska County, New Brunswick, Canada*The Republic of Madawaska*Madawaska River *Madawaska River , in Quebec and New Brunswick*Madawaska, Ontario*Madawaska Valley, Ontario...
of Renfrew County, mostly in the lumber industry of the Ottawa Valley
Ottawa Valley
The Ottawa Valley is the valley along the boundary between Eastern Ontario and Western Quebec along the Ottawa River. The valley is the transition between the Saint Lawrence Lowlands and the Canadian Shield...
.

The consecutive waves of Polish immigrants in periods from 1890–1914, 1920–1939, and 1941 to this day, settled across Canada from Cape Breton
Cape Breton Regional Municipality, Nova Scotia
Cape Breton Regional Municipality often shortened to simply CBRM, is a regional municipality in Nova Scotia's Cape Breton County.According to the 2006 Census of Canada, the population within the Cape Breton Regional Municipality is 102,250...
to Vancouver
Vancouver
Vancouver is a coastal seaport city on the mainland of British Columbia, Canada. It is the hub of Greater Vancouver, which, with over 2.3 million residents, is the third most populous metropolitan area in the country,...
, and made numerous and significant contributions to the agricultural, manufacturing, engineering, teaching, publishing, religious, mining, cultural, professional, sports, military, research, business, governmental and political life in Canada.

All Polish Canadians including their descendants are encouraged by organizations such as the Congress, to preserve their background and retain some ties with Poland and its people. In the past, the most significant role in the preservation of various aspects of Polish traditions and customs among the Polish communities in Canada fell for the Polish urban parishes, which retain the use of Polish language during services.

The first Polish-Canadian Roman Catholic bishop is Reverend Mathew Ustrzycki, consecrated in June 1985, auxiliary bishop of the Hamilton Diocese. There are Polish-Canadian priests in many congregations and orders, such as the Franciscans, Jesuits, Redemptorists, Saletinians, Resurrectionists, Oblates, Michaelites, and the Society of Christ. In addition, 80 priests are serving in 120 parishes. 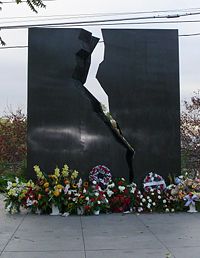 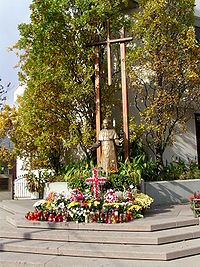 Numerous Polish-Canadians have been recognized with awards and appointments by the Queen and the Canadian governments as well as universities and various organizations. One of the most notable recipient being Andrew Mynarski, pilot-gunner from Winnipeg, awarded the Victoria Cross
Victoria Cross
The Victoria Cross is the highest military decoration awarded for valour "in the face of the enemy" to members of the armed forces of various Commonwealth countries, and previous British Empire territories....
posthumously for extreme valor in World War II
World War II
World War II, or the Second World War , was a global conflict lasting from 1939 to 1945, involving most of the world's nations—including all of the great powers—eventually forming two opposing military alliances: the Allies and the Axis...
.


Polish Canadian recipients of the Order of Canada