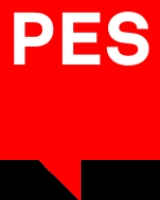 The party's English name is "Party of European Socialists". In addition, the following names are used in other languages:

In 1961, the Socialists in the European Parliament attempted to produce a common European Socialist Programme but were neglected due to the applications of Britain, Denmark, Ireland and Norway to join the European Communities. The Socialist's 1962 congress pushed for greater democratisation and powers for Parliament though it was only in 1969 that this possibility was examined by the member states.

In 1973, Denmark, Ireland and the United Kingdom joined the European Community bringing in new parties from these countries. The enlarged Socialist Congress met in Bonn
Bonn
Bonn is the 19th largest city in Germany. Located in the Cologne/Bonn Region, about 25 kilometres south of Cologne on the river Rhine in the State of North Rhine-Westphalia, it was the capital of West Germany from 1949 to 1990 and the official seat of government of united Germany from 1990 to 1999....
and inaugurated the Confederation of the Socialist Parties of the European Community. The Congress also passed a resolution on social policy
Social policy
Social policy primarily refers to guidelines, principles, legislation and activities that affect the living conditions conducive to human welfare. Thus, social policy is that part of public policy that has to do with social issues...
, including the right to decent work, social security
Social security
Social security is primarily a social insurance program providing social protection or protection against socially recognized conditions, including poverty, old age, disability, unemployment and others. Social security may refer to:...
, democracy and equality
Egalitarianism
Egalitarianism is a trend of thought that favors equality of some sort among moral agents, whether persons or animals. Emphasis is placed upon the fact that equality contains the idea of equity of quality...
in the European economy. In 1978, the Confederation of Socialist Parties approved the first common European election Manifesto. It focused on several goals among which the most important were to ensure a right to decent work, fight pollution, end discrimination, protect the consumer and promote peace, human rights and civil liberties.

The Luxembourg Congress approved the first Statue of the Confederation of Socialist Parties in 1980. The accession of Greece in 1981, followed by Spain and Portugal in 1986 brought in more parties. In 1984 another common Socialist election manifesto was approved at a congress in Luxembourg. The Manifesto proposed a socialist remedy for the economic crisis by establishing a link between industrial production, protection of the fundamental social benefits and the fight for an improved quality of life.

In 1992, with the European Communities becoming the European Union and with the Treaty of Maastricht establishing the framework for political parties at the European Level, the Confederation was able to mobilize a majority of delegates in favour of transforming the Confederation into the Party of European Socialists. The first programme of the party concentrated on job creation, democracy, gender equality, environmental and consumer protection, peace and security, regulation of immigration, discouragement of racism and fighting organised crime.

In 2004 Poul Nyrup Rasmussen
Poul Nyrup Rasmussen
Poul Nyrup Rasmussen , informally Poul Nyrup, born 15 June 1943), was Prime Minister of Denmark from 25 January 1993 to 27 November 2001 and is currently President of the Party of European Socialists . He was the leader of the governing Social Democrats from 1992 to 2002...
defeated Giuliano Amato
Giuliano Amato
Giuliano Amato is an Italian politician. He was Prime Minister of Italy twice, first from 1992 to 1993 and then from 2000 to 2001. He was more recently Vice President of the Convention on the Future of Europe that drafted the new European Constitution and headed the Amato Group. He is commonly...
to be elected President of the PES, succeeding Robin Cook in the post. He was re-elected for a further 2.5 years at the PES Congress in Porto on 8 December 2006 and for another 2.5 years at the Prague Congress in 2009.

Presidents of the Party of European Socialists and its predecessors.

The parties meet at the party Congress twice every five years to decide on political orientation, such as adopting manifestos ahead of elections. Every year that the Congress does not meet, the Council (a quarter Congress) shapes PES policy. The Congress also elects the party's President, Vice Presidents and the Presidency.

The Leader's Conference brings together Prime Ministers and Party Leaders from PES parties three to four times a year to agree strategies and resolutions.

In Decembre 2009, disappointed by the European elections results, the PES decided to put forward a candidate for Commission President at all subsequent elections. There is a campaign within the party to organise primaries to select this candidate.


Overview of the European institutions

European Council and Council of Ministers

Party-alignment at the European Council is often loose, but has been the basis of some intergovernmental cooperation. At present the following countries are led by a PES-affiliated leader, who represents that state at the European Council
European Council
The European Council is an institution of the European Union. It comprises the heads of state or government of the EU member states, along with the President of the European Commission and the President of the European Council, currently Herman Van Rompuy...
: Austria (Werner Faymann
Werner Faymann
Werner Faymann is Chancellor of Austria and chairman of the Social Democratic Party SPÖ .-Background and earlier career:Born in Vienna, Austria, he studied law at the University of Vienna for two years but did not graduate....
), Greece (George Papandreou), Slovenia (Borut Pahor
Borut Pahor
Borut Pahor is a Slovenian politician who has been Prime Minister of Slovenia since 2008. A longtime president of the Social Democrats party, Pahor served several terms as a member of the National Assembly and was its chairman from 2000 to 2004. In 2004, Pahor was elected as member of the European...
) and Spain (José Luis Rodríguez Zapatero
José Luis Rodríguez Zapatero
José Luis Rodríguez Zapatero is a member of the Spanish Socialist Workers' Party . He was elected for two terms as Prime Minister of Spain, in the 2004 and 2008 general elections. On 2 April 2011 he announced he will not stand for re-election in 2012...
). The makeup of national delegations to the Council of Ministers
Council of the European Union
The Council of the European Union is the institution in the legislature of the European Union representing the executives of member states, the other legislative body being the European Parliament. The Council is composed of twenty-seven national ministers...
is at some times subject to coalitions: for the above governments led by a PES party, that party may not be present in all Council configurations; in other governments led by non-PES parties a PES minister may be its representative for certain portfolios. PES is in coalition in a further three countries: Ireland, Belgium and Luxembourg.

With 32 members it is the only political party to have a member from every EU state, although not all of them have elected MEPs.