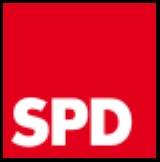 Overview
The Social Democratic Party of Germany (Sozialdemokratische Partei Deutschlands, SPD) is a social-democratic
Social democracy
Social democracy is a political ideology of the center-left on the political spectrum. Social democracy is officially a form of evolutionary reformist socialism. It supports class collaboration as the course to achieve socialism...
political party
Political party
A political party is a political organization that typically seeks to influence government policy, usually by nominating their own candidates and trying to seat them in political office. Parties participate in electoral campaigns, educational outreach or protest actions...
in Germany
Germany
Germany , officially the Federal Republic of Germany , is a federal parliamentary republic in Europe. The country consists of 16 states while the capital and largest city is Berlin. Germany covers an area of 357,021 km2 and has a largely temperate seasonal climate...
. The party is one of the two major
Major party
A major party is a political party that holds substantial influence in a country's politics, standing in contrast to a minor party. It should not be confused with majority party.According to the Merriam-Webster Dictionary:...
contemporary political parties in Germany, along with the conservative CDU/CSU
CDU/CSU
CDU/CSU, unofficially also referred to as the Union parties or the Union, is the name of the Bundestag parliamentary faction comprising the Christian Democratic Union of Germany and the Christian Social Union of Bavaria , considered to be sister parties...
, and is currently led by Sigmar Gabriel
Sigmar Gabriel
Sigmar Gabriel is a German politician currently chairing the Social Democratic Party of Germany .On 15 December 1999, after the resignation of Gerhard Glogowski, who had succeeded Gerhard Schröder in office, Gabriel became Minister-President of Lower Saxony and served until 4 March 2003...
.

What does the party think of unemployment, foreign aid, and immigration?
More
x