Encyclopedia
The Seimas is the unicameral
Unicameralism
In government, unicameralism is the practice of having one legislative or parliamentary chamber. Thus, a unicameral parliament or unicameral legislature is a legislature which consists of one chamber or house...
Lithuania
Lithuania
Lithuania , officially the Republic of Lithuania is a country in Northern Europe, the biggest of the three Baltic states. It is situated along the southeastern shore of the Baltic Sea, whereby to the west lie Sweden and Denmark...
n parliament
Parliament
A parliament is a legislature, especially in those countries whose system of government is based on the Westminster system modeled after that of the United Kingdom. The name is derived from the French , the action of parler : a parlement is a discussion. The term came to mean a meeting at which...
. It has 141 members that are elected for a four-year term. About half of the members of this legislative body are elected in individual constituencies (71), and the other half (70) are elected by nationwide vote according to proportional representation
Proportional representation
Proportional representation is a concept in voting systems used to elect an assembly or council. PR means that the number of seats won by a party or group of candidates is proportionate to the number of votes received. For example, under a PR voting system if 30% of voters support a particular...
. A party must receive at least 5%, and a multi-party union at least 7%, of the national vote to be represented in the Seimas.

The word "Seimas" comes from a Lithuanian word Sueiga, suėjimas, which means "gathering" or "meeting".

The Seimas uses parallel voting
Parallel voting
Parallel voting describes a mixed voting system where voters in effect participate in two separate elections for a single chamber using different systems, and where the results in one election have little or no impact on the results of the other...
, with elections for the 70 proportional seats and the 71 constituency seats held on separate days. The proportional seats are allocated by the Hare quota
Hare quota
The Hare quota is a formula used under some forms of the Single Transferable Vote system and the largest remainder method of party-list proportional representation...
, with a 5% election threshold
Election threshold
In party-list proportional representation systems, an election threshold is a clause that stipulates that a party must receive a minimum percentage of votes, either nationally or within a particular district, to obtain any seats in the parliament...
(or 7% for electoral alliance
Electoral alliance
An electoral alliance may take the form of a bipartisan electoral agreement, electoral agreement, electoral coalition or electoral bloc. It is an association of political parties or individuals which exists solely to stand in elections...
s) to gain list seats. 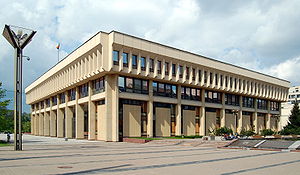 In the Seimas there are four plenary sitting a week - two on Tuesday and two on Thursday, which are represented by the speaker of the Seimas or his deputy. As a rule, all sittings of the Seimas are open.