It should be noted however that although Members of the Commission are allocated between member-states they do not represent their states; instead they are supposed to act in European interests. Normally a member-state will nominate someone of the same political party as that which forms the government of the day. There are exceptions such as Member of the Commission Burke (of Fine Gael
Fine Gael
Fine Gael is a centre-right to centrist political party in the Republic of Ireland. It is the single largest party in Ireland in the Oireachtas, in local government, and in terms of Members of the European Parliament. The party has a membership of over 35,000...
) was nominated by Taoiseach
Taoiseach
The Taoiseach is the head of government or prime minister of Ireland. The Taoiseach is appointed by the President upon the nomination of Dáil Éireann, the lower house of the Oireachtas , and must, in order to remain in office, retain the support of a majority in the Dáil.The current Taoiseach is...
Haughey
Charles Haughey
Charles James "Charlie" Haughey was Taoiseach of Ireland, serving three terms in office . He was also the fourth leader of Fianna Fáil...
(of Fianna Fáil
Fianna Fáil
Fianna Fáil – The Republican Party , more commonly known as Fianna Fáil is a centrist political party in the Republic of Ireland, founded on 23 March 1926. Fianna Fáil's name is traditionally translated into English as Soldiers of Destiny, although a more accurate rendition would be Warriors of Fál...
), or where larger states had two seats, they often went to the two major parties such as in the United Kingdom.

The failed European Constitution
Treaty establishing a Constitution for Europe
The Treaty establishing a Constitution for Europe , , was an unratified international treaty intended to create a consolidated constitution for the European Union...
first mandated that the number of Commissioners should equal two-thirds of the member states. This could be changed by a vote in the European Council, in case the number was still too high in the future. The Constitution failed ratification but this change was brought in with the Treaty of Lisbon
Treaty of Lisbon
The Treaty of Lisbon of 1668 was a peace treaty between Portugal and Spain, concluded at Lisbon on 13 February 1668, through the mediation of England, in which Spain recognized the sovereignty of Portugal's new ruling dynasty, the House of Braganza....
. However, as Lisbon was being ratified the Irish electorate voted against it with one reason being the fear of losing a Commissioner. The Irish then voted again, in favour for the treaty on a number of conditions; one being that they kept their commissioner.

Thus it is proposed that the member state who doesn't get a Commissioner, will get the post of High Representative, the so called 26+1 formula. Other ideas that have been floated to deal with the high number of commissioners has been the creation of junior members for smaller states, the creation of "super-commissioners".

In addition to its role in approving a new Commission, the European Parliament has the power at any time to force the entire Commission to resign through a vote of no confidence. This requires a vote that makes up at least two-thirds of those voting and a majority of the total membership of the Parliament. While it has never used this power, it threatened to use it against the Commission headed by Jacques Santer in 1999 over allegations of corruption. In response, the Santer Commission
Santer Commission
The Santer Commission was the European Commission in office between 23 January 1995 and 15 March 1999. The administration was led by Jacques Santer ....
resigned en masse of its own accord, the only time a Commission has done so. 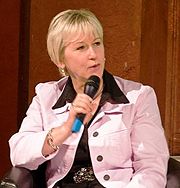 Commissioners are also required to remain above national politics while exercising their duties in the Commission in order to maintain independence. However that requirement has slowly been eroded as the institution has become more politicised. During the Prodi Commission
Prodi Commission
The Prodi Commission was the European Commission in office between 1999 and 2004. The administration was led by former Italian Prime Minister Romano Prodi.-History:...
, Anna Diamantopoulou
Anna Diamantopoulou
Anna Diamantopoulou , is a Member of Parliament in Greece for the party of the Panhellenic Socialist Movement and the current Minister for Education, Lifelong Learning and Religious Affairs in Greece...
(Employment and Social Affairs
European Commissioner for Employment, Social Affairs & Equal Opportunities
The Commissioner for Employment, Social Affairs and Inclusion is the member of the European Commission. The current commissioner is László Andor....
) took leave from the Commission to participate in the 2004 Greek elections
Greek legislative election, 2004
Legislative elections were held in Greece on March 7, 2004. At stake were 300 seats in the Greek Parliament, the Vouli . The New Democracy Party of Kostas Karamanlis won a decisive victory in the elections, ending eleven years of rule by the Panhellenic Socialist Movement .PASOK was led into the...
and resigned when she won a seat despite her party losing. Romano Prodi
Romano Prodi
Romano Prodi is an Italian politician and statesman. He served as the Prime Minister of Italy, from 17 May 1996 to 21 October 1998 and from 17 May 2006 to 8 May 2008...
campaigned in the 2001 Italian elections
Italian general election, 2001
A national general election was held in Italy on May 13, 2001 to elect members of the Chamber of Deputies and the Senate of the Republic. The 14th Parliament of the Italian republic was chosen....
while still President.

Recently, Louis Michel
Louis Michel
Louis H. O. Ch. Michel is a Belgian politician. He served in the government of Belgium as Minister of Foreign Affairs from 1999 to 2004 and was European Commissioner for Development and Humanitarian Aid from 2004 to 2009. Since 2009, he has been a Member of the European Parliament...
(Development & Humanitarian Aid
European Commissioner for Development & Humanitarian Aid
The Commissioner for International Cooperation, Humanitarian Aid and Crisis Response is a member of the European Commission. The post is currently held by Kristalina Georgieva....
) announced that he would go on unpaid leave to take part in the 2007 Belgian elections
Belgian general election, 2007
The 2007 Belgian general election took place on Sunday 10 June 2007. Voters went to the polls in order to elect new members for the Chamber of Representatives and Senate.Eligible voters were Belgian citizens 18 years and older...
. Although he positioned himself so as not to be elected, the European Parliament's development committee
Committee on Development
The Committee on Development is a standing committee of the European Parliament responsible for promoting, implementing and monitoring the development and cooperation policy of the European Union, notably talks with developing countries; aid to developing countries; and promotion of democratic...
asked the Parliament's legal service to assess if his participation violated the treaties
Treaties of the European Union
The Treaties of the European Union are a set of international treaties between the European Union member states which sets out the EU's constitutional basis. They establish the various EU institutions together with their remit, procedures and objectives...
. Michel claimed that politicisation of this manner is part of reconnecting the Union with its citizens. The Commission revised its code of conduct for Commissioners allowing them to "be active members of political parties or trade unions." To participate in an election campaign they are required to "withdraw from the work of the Commission for the duration of the campaign."

This does throw their independence in doubt, where a politician leaves their national scene for one or two terms and returns to it for a new job. Most in essence owe their positions to nomination and support from national party leaders and parties they have been aligned to; usually seeking to return to the party-political fray.

Politicisation has even gone so far as commissioners backing national candidates, with Neelie Kroes
Neelie Kroes
Neelie Kroes is a Dutch politician of the People's Party for Freedom and Democracy . She served as a Member of the House of Representatives from 3 August 1971 until 28 December 1977 when she became State Secretary for Transport, Public Works and Water Management from 28 December 1977 until 11...
(Competition) backing Angela Merkel
Angela Merkel
Angela Dorothea Merkel is the current Chancellor of Germany . Merkel, elected to the Bundestag from Mecklenburg-Vorpommern, has been the chairwoman of the Christian Democratic Union since 2000, and chairwoman of the CDU-CSU parliamentary coalition from 2002 to 2005.From 2005 to 2009 she led a...
in the 2005 German elections
German federal election, 2005
German federal elections took place on 18 September 2005 to elect the members of the 16th German Bundestag, the federal parliament of Germany. They became necessary after a motion of confidence in Chancellor Gerhard Schröder failed on 1 July...
and Margot Wallström
Margot Wallström
Margot Elisabeth Wallström is a Swedish social democratic, currently holding the job as . Prior to this post, she served as European Commissioner for Institutional Relations and Communication Strategy...
(Institutional Relations & Communication Strategy) backing Ségolène Royal
Ségolène Royal
Marie-Ségolène Royal , known as Ségolène Royal, is a French politician. She is the president of the Poitou-Charentes Regional Council, a former member of the National Assembly, a former government minister, and a prominent member of the French Socialist Party...
in the 2007 French elections
French presidential election, 2007
The 2007 French presidential election, the ninth of the Fifth French Republic was held to elect the successor to Jacques Chirac as president of France for a five-year term.The winner, decided on 5 and 6 May 2007, was Nicolas Sarkozy...
. Wallström defended this claiming that the EU has to get more political and controversial as being a vital role in communicating the Commission. Wallström has been notable for engaging in debate and politics, she was the first commissioner to start her own blog.

However their political nature can also cause problems in their habit of leaving the job early in the final years of the Commission to take up new national posts. In seeking to secure their post-Commission job, they can undermine the work of the Commission. Following elections in Cyprus, Commissioner Kyprianou left to become Cypriot Foreign Minister. Likewise, Commissioner Frattini left to do the same following elections in Italy. During the previous Prodi Commission
Prodi Commission
The Prodi Commission was the European Commission in office between 1999 and 2004. The administration was led by former Italian Prime Minister Romano Prodi.-History:...
, Pedro Solbes
Pedro Solbes
Pedro Solbes Mira is a Spanish economist. While independent in the sense of not affiliated to any party, his various ministerial roles in Spain have always been within Socialist Workers' Party cabinets...
left to become the Spanish finance minister, Michel Barnier
Michel Barnier
Michel Barnier is a French politician of the Union for a Popular Movement and Vice President of the European People's Party . He is the current European Commissioner for Internal Market and Services...
left to become French foreign minister, Erkki Liikanen
Erkki Liikanen
Erkki Liikanen is a Finnish social democratic politician and the Governor of the Bank of Finland.-Career:...
left to become head of a Helsinki bank and Anna Diamantopoulou
Anna Diamantopoulou
Anna Diamantopoulou , is a Member of Parliament in Greece for the party of the Panhellenic Socialist Movement and the current Minister for Education, Lifelong Learning and Religious Affairs in Greece...
also resigned early. Even President Prodi started campaigning in the Italian elections before his term as head of the Commission was over.

Appointment to the Commission has the effect of removing a political figure from a country for a period of years, and this has been compared to the ancient Athenian
Athenian democracy
Athenian democracy developed in the Greek city-state of Athens, comprising the central city-state of Athens and the surrounding territory of Attica, around 508 BC. Athens is one of the first known democracies. Other Greek cities set up democracies, and even though most followed an Athenian model,...
practice of ostracism.