Encyclopedia
The Riigikogu is the unicameral parliament
Parliament
A parliament is a legislature, especially in those countries whose system of government is based on the Westminster system modeled after that of the United Kingdom. The name is derived from the French , the action of parler : a parlement is a discussion. The term came to mean a meeting at which...
of Estonia
Estonia
Estonia , officially the Republic of Estonia , is a state in the Baltic region of Northern Europe. It is bordered to the north by the Gulf of Finland, to the west by the Baltic Sea, to the south by Latvia , and to the east by Lake Peipsi and the Russian Federation . Across the Baltic Sea lies...
. All important state-related questions pass through the Riigikogu. In addition to approving legislation, the Riigikogu appoints high officials, including the Prime Minister
Prime Minister of Estonia
The Prime Minister of Estonia is the head of government of the Republic of Estonia. The prime minister is nominated by the President after appropriate consultations with the parliamentary factions and confirmed by the Parliament. In case of disagreement, the Parliament can reject the President's...
and Chief Justice of the Supreme Court
Supreme Court of Estonia
The Supreme Court of Estonia is the court of last resort in Estonia. It is both a court of cassation and a constitutional court. The courthouse is in Tartu.Chief justices=* Kaarel Parts * Rait Maruste...
, and elects (either alone or, if necessary, together with representatives of local government within a broader electoral college) the President
President of Estonia
The President of the Republic is the head of state of the Republic of Estonia.Estonia is a parliamentary republic, therefore President is mainly a symbolic figure and holds no executive power. The President has to suspend his membership in any political party for his term in office...
. The Riigikogu also ratifies significant foreign treaties that impose military and proprietary obligations, bring about changes in law, etc.; approves the budget presented by the government as law and monitors the executive power.

1938–1940 the National Assembly was divided into two chambers: The Chamber of Deputies
Chamber of Deputies
Chamber of deputies is the name given to a legislative body such as the lower house of a bicameral legislature, or can refer to a unicameral legislature.-Description:...
(Riigivolikogu) and the National Council
National Council
-Conservation:* National Council for Science and the Environment, a US-based non-profit organization which has a mission to improve the scientific basis for environmental decisionmaking...
(Riiginõukogu).

Since 1922, the sessions of the Riigikogu have taken place in the Toompea
Toompea
Toompea is a limestone hill in the central part of the city of Tallinn, the capital of Estonia. The hill is an oblong tableland, which measures about 400 by 250 metres, has an area of and is about 20–30 metres higher than the surrounding areas...
castle, where a new building in the exquisite expressionist and in an unusually modern style was erected to the former courtyard of the medieval castle in 1920–1922. During the subsequent periods of Soviet
Soviet Union
The Soviet Union , officially the Union of Soviet Socialist Republics , was a constitutionally socialist state that existed in Eurasia between 1922 and 1991....
(1940–41), German
Nazi Germany
Nazi Germany , also known as the Third Reich , but officially called German Reich from 1933 to 1943 and Greater German Reich from 26 June 1943 onward, is the name commonly used to refer to the state of Germany from 1933 to 1945, when it was a totalitarian dictatorship ruled by...
(1941–44) and second Soviet occupation
Occupation of Baltic Republics
The occupation of the Baltic states refers to the military occupation of the three Baltic states: Estonia, Latvia and Lithuania by the Soviet Union under the auspices of the Molotov–Ribbentrop Pact on 14 June 1940 followed by their incorporation into the USSR as constituent republics, unrecognised...
of Estonia (1944–1991) the Riigikogu was disbanded. The castle and the building of Riigikogu was used by the Supreme Soviet of Estonian SSR.


Independence from the Soviet Union

In September 1992, a year after Estonia had regained its independence from the Soviet Union
Dissolution of the Soviet Union
The dissolution of the Soviet Union was the disintegration of the federal political structures and central government of the Union of Soviet Socialist Republics , resulting in the independence of all fifteen republics of the Soviet Union between March 11, 1990 and December 25, 1991...
, elections to the Riigikogu took place according to the Constitution of Estonia
Constitution of Estonia
The Constitution of Estonia is the fundamental law of the Republic of Estonia and establishes the state order as that of a democratic republic where the supreme power is vested in its citizens. It was adopted in a freely elected Estonian Constituent Assembly on 15 June 1920 and came into force on...
adopted in the summer of the same year. According to the 1992 constitution, the Riigikogu has 101 members. The present Riigikogu was elected on March 4, 2007. The main differences between this system and a pure political representation, or proportional representation, system are the established 5% national threshold, and the use of a modified d'Hondt
D'Hondt method
The d'Hondt method is a highest averages method for allocating seats in party-list proportional representation. The method described is named after Belgian mathematician Victor D'Hondt who described it in 1878...
formula (the divisor is raised to the power 0.9). This modification makes for more unproportionality than does the usual form of the formula. 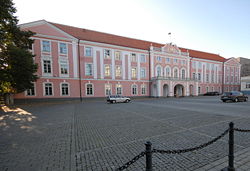 Speakers of the Riigikogu


Speakers of the Riigivolikogu (lower chamber)


Speaker of the Riiginõukogu (upper chamber)