Encyclopedia
The National Assembly of Bulgaria is the unicameral parliament
Parliament
A parliament is a legislature, especially in those countries whose system of government is based on the Westminster system modeled after that of the United Kingdom. The name is derived from the French , the action of parler : a parlement is a discussion. The term came to mean a meeting at which...
and body of the legislative of the Republic
Republic
A republic is a form of government in which the people, or some significant portion of them, have supreme control over the government and where offices of state are elected or chosen by elected people. In modern times, a common simplified definition of a republic is a government where the head of...
of Bulgaria
Bulgaria
Bulgaria , officially the Republic of Bulgaria , is a parliamentary democracy within a unitary constitutional republic in Southeast Europe. The country borders Romania to the north, Serbia and Macedonia to the west, Greece and Turkey to the south, as well as the Black Sea to the east...
. 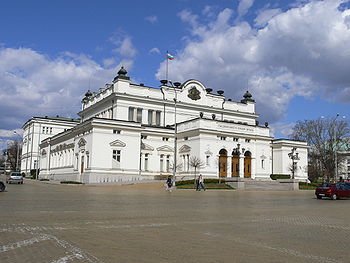 The National Assembly consists of 240 members elected for a four-year term. 209 of the representatives are elected by proportional representation
Proportional representation
Proportional representation is a concept in voting systems used to elect an assembly or council. PR means that the number of seats won by a party or group of candidates is proportionate to the number of votes received. For example, under a PR voting system if 30% of voters support a particular...
in multi-seat constituencies and 31 are elected in single-seat constituencies according to the last amendment of the Electoral law governing parliamentary elections, promulgated SG 36th edition on 15th of May 2009. Political parties must gather a minimum of 4% of the national vote in order to enter the Assembly. Bulgaria has a multi-party system. Obtaining of all state power by a single party is forbidden according to the articles of 1991 Constitution of Bulgaria.

In addition to the ordinary National Assembly, a Grand National Assembly (Велико народно събрание, Veliko narodno sabranie) may be convened in order for matters of special jurisdiction, such as: 1) Adoption of a new Constitution; 2) Amendment of certain articles of the Constitution, e.g. those related with the basic civil rights; 3) Changes in the territory (gain or loss) of the Rebublic, etc. Before the World War II the Grand National Assembly was also competent in electing the Regency of the Bulgarian Kingdom if the tzar has not come to age. The First and the Third Grand National Assemblies also elected the first two Bulgarian monarchs after the liberation from the Turkish yoke - The Grand Duke (Knjaz) Alexander Battenberg and the Grand Duke (Knjaz) Ferdinand Saxe Coburg-Gotha.

A total of seven Grand National Assemblies have been in operation in Bulgaria, the last one from 10 July 1990 to 12 July 1991 adopting the current constitution.

The National Assembly's main building has been proclaimed a monument of culture for its historic significance. Situated in downtown Sofia
Sofia
Sofia is the capital and largest city of Bulgaria and the 12th largest city in the European Union with a population of 1.27 million people. It is located in western Bulgaria, at the foot of Mount Vitosha and approximately at the centre of the Balkan Peninsula.Prehistoric settlements were excavated...
, it was designed in Neo-Renaissance
Neo-Renaissance
Renaissance Revival is an all-encompassing designation that covers many 19th century architectural revival styles which were neither Grecian nor Gothic but which instead drew inspiration from a wide range of classicizing Italian modes...
style by Konstantin Jovanović
Konstantin Jovanović
Konstantin Jovanović was a prolific Serbian, Bulgarian and Austro–Hungarian architect known for providing the original designs of the National Assembly of Bulgaria and National Assembly of Serbia buildings.Jovanović was born in Vienna, the capital of the Austrian Empire, to a...
, a Serbian-Bulgarian architect who received his education in Vienna
Vienna
Vienna is the capital and largest city of the Republic of Austria and one of the nine states of Austria. Vienna is Austria's primary city, with a population of about 1.723 million , and is by far the largest city in Austria, as well as its cultural, economic, and political centre...
and Switzerland
Switzerland
Switzerland name of one of the Swiss cantons. ; ; ; or ), in its full name the Swiss Confederation , is a federal republic consisting of 26 cantons, with Bern as the seat of the federal authorities. The country is situated in Western Europe,Or Central Europe depending on the definition....
and whose other works include the Parliament of Serbia building. It was constructed between 1884 and 1886 by Friederich Wilhelm Gustav Liebe, a young builder from Saxony
Saxony
The Free State of Saxony is a landlocked state of Germany, contingent with Brandenburg, Saxony Anhalt, Thuringia, Bavaria, the Czech Republic and Poland. It is the tenth-largest German state in area, with of Germany's sixteen states....
who was only 22 years old when construction began.

The building is depicted on the reverse
Obverse and reverse
Obverse and its opposite, reverse, refer to the two flat faces of coins and some other two-sided objects, including paper money, flags , seals, medals, drawings, old master prints and other works of art, and printed fabrics. In this usage, obverse means the front face of the object and reverse...
of the Bulgarian 20 leva
Bulgarian lev
The lev is the currency of Bulgaria. It is divided in 100 stotinki . In archaic Bulgarian the word "lev" meant "lion".It is speculated that Bulgaria, as a member of the European Union will adopt the Euro in 2015 .- First lev, 1881–1952 :...
banknote, issued in 1999 and 2007.