Encyclopedia
The Senate of Romania is the upper house
Upper house
An upper house, often called a senate, is one of two chambers of a bicameral legislature, the other chamber being the lower house; a legislature composed of only one house is described as unicameral.- Possible specific characteristics :...
in the bicameral Parliament of Romania
Parliament of Romania
The Parliament of Romania is made up of two chambers:*The Chamber of Deputies*The SenatePrior to the modifications of the Constitution in 2003, the two houses had identical attributes. A text of a law had to be approved by both houses...
. It has 137 seats (as of 28 November 2004), to which members are elected by direct popular vote, using Mixed member proportional representation in 42 electoral districts (the 41 counties plus the city of Bucharest), to serve four-year terms. 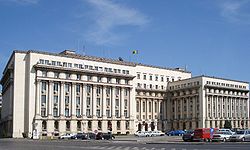 After the Romanian Revolution of 1989
Romanian Revolution of 1989
The Romanian Revolution of 1989 was a series of riots and clashes in December 1989. These were part of the Revolutions of 1989 that occurred in several Warsaw Pact countries...
, the Senate was housed in the "Palace of the Senate" , located in Revolution Square
Revolution Square, Bucharest
Revolution Square is a square in central Bucharest, on Calea Victoriei. Known as Piaţa Palatului until 1989, it was later renamed after the 1989 Romanian Revolution....
. That U-shaped structure was built from 1938 to 1941 under engineer Emil Prager's coordination, following the plans of architect Emil Nădejde. It housed the Council of Ministers and from 1958 to 1989 it was the headquarters of the Central Committee of the Romanian Communist Party
Romanian Communist Party
The Romanian Communist Party was a communist political party in Romania. Successor to the Bolshevik wing of the Socialist Party of Romania, it gave ideological endorsement to communist revolution and the disestablishment of Greater Romania. The PCR was a minor and illegal grouping for much of the...
. During the Revolution, Romanian President Nicolae Ceauşescu
Nicolae Ceausescu
Nicolae Ceaușescu was a Romanian Communist politician. He was General Secretary of the Romanian Communist Party from 1965 to 1989, and as such was the country's second and last Communist leader...
and his wife Elena
Elena Ceausescu
Elena Ceaușescu was the wife of Romania's Communist leader Nicolae Ceaușescu, and Deputy Prime Minister of Romania.-Background:She was born Elena Petrescu into a peasant family in Petrești commune, Dâmboviţa County, in the informal region of Wallachia. Her family was supported by her father's job...
fled by helicopter from the roof of the building. In 2005 Senators moved into the Palace of the Parliament
Palace of the Parliament
The Palace of the Parliament in Bucharest, Romania is a multi-purpose building containing both chambers of the Romanian Parliament. According to the Guinness Book of World Records, the Palace is the world's largest civilian administrative building, most expensive administrative building, and...
, joining their colleagues from the Chamber of Deputies
Chamber of Deputies of Romania
The Chamber of Deputies is the lower house in Romania's bicameral parliament. It has 315 seats, to which deputies are elected by direct popular vote on a proportional representation basis to serve four-year terms...
. "Palatul Senatului" now houses offices of the Ministry of Administration and Interior.

Elections to the Senate were held on 26 November 2000, in which the Social Democratic Party of Romania (PSD) won an overall majority. Then President of the Senate of Romania was Nicolae Văcăroiu
Nicolae Vacaroiu
Nicolae Văcăroiu is a Romanian politician, member of the Social Democratic Party, who served as Prime Minister between 1992 and 1996. Before the 1989 Revolution he worked at the Committee for State Planning, together with Theodor Stolojan....
, who was elected in December, 2000. The allocation of seats was as follows:

Presidents of the Senate