Note: The Entente Forces are sometimes also referred to as the Entente Powers or Allies of World War I
Allies of World War I
The Entente Powers were the countries at war with the Central Powers during World War I. The members of the Triple Entente were the United Kingdom, France, and the Russian Empire; Italy entered the war on their side in 1915...
.
Czechoslovak Legions
Czechoslovak Legions
The Czechoslovak Legions were volunteer armed forces composed predominantly of Czechs and Slovaks fighting together with the Entente powers during World War I...
France
French Third Republic
The French Third Republic was the republican government of France from 1870, when the Second French Empire collapsed due to the French defeat in the Franco-Prussian War, to 1940, when France was overrun by Nazi Germany during World War II, resulting in the German and Italian occupations of France...
Portugal
Portuguese First Republic
The Portuguese First Republic spans a complex 16 year period in the history of Portugal, between the end of the period of constitutional monarchy marked by the 5 October 1910 revolution and the 28 May coup d'état of 1926...

Mexico - Declined an alliance with Germany (see Zimmermann Telegram
Zimmermann Telegram
The Zimmermann Telegram was a 1917 diplomatic proposal from the German Empire to Mexico to make war against the United States. The proposal was caught by the British before it could get to Mexico. The revelation angered the Americans and led in part to a U.S...
). Netherlands - An ally of the United Kingdom by treaty. Traded with both sides. - Gave naval assistance to the United Kingdom. Persia
Qajar dynasty
The Qajar dynasty was an Iranian royal family of Turkic descent who ruled Persia from 1785 to 1925....
- Occupied by British and Russian troops. Spain
Spain under the Restoration
The Restoration was the name given to the period that began on December 29, 1874 after the First Spanish Republic ended with the restoration of Alfonso XII to the throne after a coup d'état by Martinez Campos, and ended on April 14, 1931 with the proclamation of the Second Spanish Republic.After...
- Also treaty bound ally to the United Kingdom. - Financially supported Germany. - Switzerland did declare a "state of siege". - Supplied the Allies with oil. 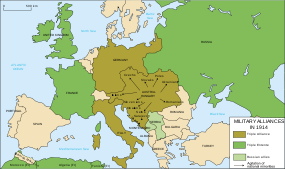