Encyclopedia
Parken Stadium is a football
Football (soccer)
Association football, more commonly known as football or soccer, is a sport played between two teams of eleven players with a spherical ball...
stadium
Stadium
A modern stadium is a place or venue for outdoor sports, concerts, or other events and consists of a field or stage either partly or completely surrounded by a structure designed to allow spectators to stand or sit and view the event.)Pausanias noted that for about half a century the only event...
in the Indre Østerbro
Indre Østerbro
Indre Østerbro , is one of the 15 administrative, statistical, and tax city districts comprising the municipality of Copenhagen, Denmark. It lies on the eastern edge of the municipality...
(Inner Østerbro) district of Copenhagen
Copenhagen
Copenhagen is the capital and largest city of Denmark, with an urban population of 1,199,224 and a metropolitan population of 1,930,260 . With the completion of the transnational Øresund Bridge in 2000, Copenhagen has become the centre of the increasingly integrating Øresund Region...
, Denmark
Denmark
Denmark is a Scandinavian country in Northern Europe. The countries of Denmark and Greenland, as well as the Faroe Islands, constitute the Kingdom of Denmark . It is the southernmost of the Nordic countries, southwest of Sweden and south of Norway, and bordered to the south by Germany. Denmark...
, built from 1990–1992. It currently has a capacity of 38,065 for football games, and is the home ground of F.C. Københaven
F.C. Copenhagen
F.C. Copenhagen is a professional Danish football club in Copenhagen, Denmark. It is part of the Parken Sport & Entertainment....
and the Danish national football team
Denmark national football team
The Denmark national football team represents Denmark in association football and is controlled by the Danish Football Association , the governing body for the football clubs which are organized under DBU...
. The capacity for concerts exceeds the capacity for matches – the stadium can hold as many as 50,000 people with an end-stage setup and 55,000 with a center-stage setup. 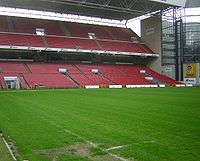 The stadium was rebuilt by investors Baltica Finans A/S in turn of the guarantee from the Danish Football Association
Danish Football Association
The Danish Football Association is the governing body of football in Denmark. It is the organization of the Danish football clubs and runs the professional Danish football leagues and the men's and women's national teams. It is based in the city of Brøndby and is a founding member of both FIFA...
, that all national matches would be played at Parken for 15 years. The re-construction, tore down and re-built three of the original four stands, cost 640 million Danish krone
Danish krone
The krone is the official currency of the Kingdom of Denmark consisting of Denmark, the Faroe Islands and Greenland. It is subdivided into 100 øre...
r.

Once a year, the TV channel TV 2 Zulu
TV 2 Zulu
TV 2 Zulu is a Danish television station which started broadcasting on 15 October 2000. It is primarily aimed at viewers between 15 and 30 years of age....
organizes a big concert, Zulu Rocks.

The biggest concert ever held in Parken was a performance by Michael Jackson
Michael Jackson
Michael Joseph Jackson was an American recording artist, entertainer, and businessman. Referred to as the King of Pop, or by his initials MJ, Jackson is recognized as the most successful entertainer of all time by Guinness World Records...
on August 14, 1997, during his HIStory
HIStory World Tour
The HIStory World Tour was the third and final worldwide solo concert tour by American megasuperstar Michael Jackson, covering Europe, Africa, Asia, Oceania and North America. The tour included a total of 82 concerts and was attended by approximately 4.5 million fans, beating his previous Bad Tour...
tour, with 60,000 tickets sold.

Eminem
Eminem
Marshall Bruce Mathers III , better known by his stage name Eminem or his alter ego Slim Shady, is an American rapper, record producer, songwriter and actor. Eminem's popularity brought his group project, D12, to mainstream recognition...
was scheduled to perform at Parken in 2005, but he canceled his European tour.