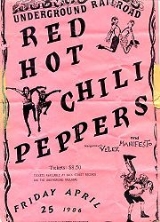 Overview
Red Hot Chili Peppers is an American rock
Rock music
Rock music is a genre of popular music that developed during and after the 1960s, particularly in the United Kingdom and the United States. It has its roots in 1940s and 1950s rock and roll, itself heavily influenced by rhythm and blues and country music...
band, formed in Los Angeles in 1983. The group's musical style primarily consists of rock with an emphasis on funk
Funk
Funk is a music genre that originated in the mid-late 1960s when African American musicians blended soul music, jazz and R&B into a rhythmic, danceable new form of music. Funk de-emphasizes melody and harmony and brings a strong rhythmic groove of electric bass and drums to the foreground...
, as well as elements from other genres such as punk
Punk rock
Punk rock is a rock music genre that developed between 1974 and 1976 in the United States, the United Kingdom, and Australia. Rooted in garage rock and other forms of what is now known as protopunk music, punk rock bands eschewed perceived excesses of mainstream 1970s rock...
, hip hop
Hip hop music
Hip hop music, also called hip-hop, rap music or hip-hop music, is a musical genre consisting of a stylized rhythmic music that commonly accompanies rapping, a rhythmic and rhyming speech that is chanted...
and psychedelic rock
Psychedelic rock
Psychedelic rock is a style of rock music that is inspired or influenced by psychedelic culture and attempts to replicate and enhance the mind-altering experiences of psychedelic drugs. It emerged during the mid 1960s among folk rock and blues rock bands in United States and the United Kingdom...
. The band consists of founding members Anthony Kiedis
Anthony Kiedis
Anthony Kiedis is an American vocalist/lyricist, and occasional actor best known as the lead vocalist of the Grammy-winning American rock band Red Hot Chili Peppers. Kiedis spent his youth in Grand Rapids, Michigan with his mother before moving, shortly before his 12th birthday, to Hollywood,...
(vocals) and Michael "Flea" Balzary
Flea (musician)
Michael Peter Balzary , better known by his stage name Flea, is an Australian-American musician and occasional actor. He is best known as the bassist, co-founding member, and one of the composers of the rock band Red Hot Chili Peppers...
(bass), alongside longtime drummer Chad Smith
Chad Smith
Chad Smith is an American musician, best known as the longtime and current drummer of Red Hot Chili Peppers. Smith is also the drummer of the hard rock supergroup Chickenfoot which includes Sammy Hagar, Joe Satriani, and Michael Anthony, former Deep Purple vocalist Glenn Hughes' backing band and...
, The band had a huge number of guitarists in the past, the bands current is Josh Klinghoffer
Josh Klinghoffer
Joshua Adam "Josh" Klinghoffer is an American multi-instrumentalist, who is best known as the current guitarist for the rock band Red Hot Chili Peppers. Klinghoffer replaced his friend and frequent collaborator John Frusciante, who left the band in 2009.Klinghoffer also fronts Dot Hacker, and was...
who joined in late 2009.

Why do rhcp give writing credit to "strummer-jones" on the song "right on time"? I know they use the intro to "london calling" in concert, but why th...
More