Regional structure of the FA 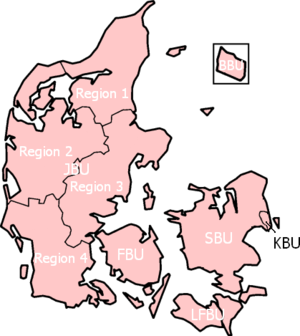 Player of the Year
Since 1963, DBU has awarded the Danish Player of the Year in a vote amongst the Danish players. In the time of amateur football, only players in the domestic league could achieve the prize, and even after the emergence of paid football in 1978, no players in foreign clubs were eligible for the award. When the award was finally opened to all Danish players, domestic and abroad, in 1983, national team captain Morten Olsen
Morten Olsen
Morten Per Olsen is a Danish football manager and former football player. He has been the head coach of the Danish national team since 2000, guiding Denmark to the 2002 FIFA World Cup, 2004 European Championship and 2010 FIFA World Cup...
was the first player to win the Player of the Year award taking all Danish players into consideration. The record number of award wins is four, by Brian Laudrup
Brian Laudrup
Brian Laudrup is a Danish former football player and current football commentator, pundit and analyst on TV3+. Along with former international goalkeeper Lars Høgh, Laudrup manages a football academy for marginalized youth...
(1989, 1992, 1995, and 1997).

Young Players of the Year
The Young Players of the Year Awards on the other hand are sponsored by Arla Foods
Arla Foods
Arla Foods is a Swedish-Danish cooperative based in Århus, Denmark, and the largest producer of dairy products in Scandinavia. Arla Foods was formed as the result of a merger between the Swedish dairy cooperative Arla and the Danish dairy company MD Foods on 17 April 2000.Arla Foods is the seventh...
, the awards were initially known as Mælkens talentpriser (the milk's talent awards) in order to promote the line of dairy product
Dairy product
Dairy products are generally defined as foods produced from cow's or domestic buffalo's milk. They are usually high-energy-yielding food products. A production plant for such processing is called a dairy or a dairy factory. Raw milk for processing comes mainly from cows, and, to a lesser extent,...
s of the company then known as "MD Foods". DBU found new sponsor DONG
DONG Energy
-History:The Danish state company Dansk Naturgas A/S was founded in 1972 to manage resources in the Danish sector of the North Sea. After some years, the company was renamed to Dansk Olie og Naturgas A/S . At the beginning of 2000s, DONG started to extend itself into the electricity market by...
(later DONG Energy), an oil company, in 2004 but Arla went on to sponsor the prize which was renamed Arla's talentpriser (Arla's talent awards) in 2005.http://www.dbu.dk/page.aspx?id=318http://www.dbu.dk/news/newsShow.aspx?id=235766http://www.dbu.dk/news/newsShow.aspx?id=242463