Encyclopedia
Organopalladium chemistry is a branch of organometallic chemistry
Organometallic chemistry
Organometallic chemistry is the study of chemical compounds containing bonds between carbon and a metal. Since many compounds without such bonds are chemically similar, an alternative may be compounds containing metal-element bonds of a largely covalent character...
that deals with organic palladium
Palladium
Palladium is a chemical element with the chemical symbol Pd and an atomic number of 46. It is a rare and lustrous silvery-white metal discovered in 1803 by William Hyde Wollaston. He named it after the asteroid Pallas, which was itself named after the epithet of the Greek goddess Athena, acquired...
compounds and their reactions. Palladium is often used as a catalyst in the reduction of alkene
Alkene
In organic chemistry, an alkene, olefin, or olefine is an unsaturated chemical compound containing at least one carbon-to-carbon double bond...
s and alkyne
Alkyne
Alkynes are hydrocarbons that have a triple bond between two carbon atoms, with the formula CnH2n-2. Alkynes are traditionally known as acetylenes, although the name acetylene also refers specifically to C2H2, known formally as ethyne using IUPAC nomenclature...
s with hydrogen
Hydrogen
Hydrogen is the chemical element with atomic number 1. It is represented by the symbol H. With an average atomic weight of , hydrogen is the lightest and most abundant chemical element, constituting roughly 75% of the Universe's chemical elemental mass. Stars in the main sequence are mainly...
. This process involves the formation of a palladium-carbon covalent bond
Covalent bond
A covalent bond is a form of chemical bonding that is characterized by the sharing of pairs of electrons between atoms. The stable balance of attractive and repulsive forces between atoms when they share electrons is known as covalent bonding....
. Palladium is also prominent in carbon-carbon coupling reaction
Coupling reaction
A coupling reaction in organic chemistry is a catch-all term for a variety of reactions where two hydrocarbon fragments are coupled with the aid of a metal catalyst...
s, as demonstrated in tandem reactions.

In contrast to its next-door neighbors the group 11 element
Group 11 element
A Group 11 element is one in the series of elements in group 11 in the periodic table, consisting of transition metals which are the traditional coinage metals of copper , silver , and gold...
s, the element palladium in organic chemistry does not involve preparation of organopalladium compounds itself but rather organopalladium reactive intermediates. On top of that in many reactions only catalytical
Catalysis
Catalysis is the change in rate of a chemical reaction due to the participation of a substance called a catalyst. Unlike other reagents that participate in the chemical reaction, a catalyst is not consumed by the reaction itself. A catalyst may participate in multiple chemical transformations....
amounts of the metal are used.

Palladium reacts with alkene
Alkene
In organic chemistry, an alkene, olefin, or olefine is an unsaturated chemical compound containing at least one carbon-to-carbon double bond...
s to form a pi complex which can react with a multitude of nucleophile
Nucleophile
A nucleophile is a species that donates an electron-pair to an electrophile to form a chemical bond in a reaction. All molecules or ions with a free pair of electrons can act as nucleophiles. Because nucleophiles donate electrons, they are by definition Lewis bases.Nucleophilic describes the...
s akin a oxymercuration reaction
Oxymercuration reaction
The oxymercuration reaction is an electrophilic addition organic reaction that transforms an alkene into a neutral alcohol. In oxymercuration, the alkene reacts with mercuric acetate in aqueous solution to yield the addition of an acetoxymercuri group and a hydroxy group across the double bond...
. The C-Pd bond is then removed by a reduction or an elimination
Elimination reaction
An elimination reaction is a type of organic reaction in which two substituents are removed from a molecule in either a one or two-step mechanism...
. In the industrially important Wacker process
Wacker process
The Wacker process or the Hoechst-Wacker process originally referred to the oxidation of ethylene to acetaldehyde by oxygen in water in the presence of a tetrachloropalladate catalyst...
, ethylene is converted to acetaldehyde with palladium chloride.

Allyl
Allyl
An allyl group is a substituent with the structural formula H2C=CH-CH2R, where R is the connection to the rest of the molecule. It is made up of a methylene , attached to a vinyl group . The name is derived from the Latin word for garlic, Allium sativum. Theodor Wertheim isolated an allyl...
compounds with suitable leaving group
Leaving group
In chemistry, a leaving group is a molecular fragment that departs with a pair of electrons in heterolytic bond cleavage. Leaving groups can be anions or neutral molecules. Common anionic leaving groups are halides such as Cl−, Br−, and I−, and sulfonate esters, such as para-toluenesulfonate...
s react with palladium(II) salts to pi-allyl complexes having hapticity
Hapticity
The term hapticity is used to describe how a group of contiguous atoms of a ligand are coordinated to a central atom. Hapticity of a ligand is indicated by the Greek character 'eta', η. A superscripted number following the η denotes the number of contiguous atoms of the ligand that are bound to...
3 such as the allylpalladium chloride dimer
Allylpalladium chloride dimer
Allylpalladium chloride dimer is a chemical compound with the formula 2Pd2Cl2. This yellow air-stable compound is an important catalyst used in organic synthesis.-Synthesis and reactions:...
. These intermediates too react with nucleophiles for example carbanion
Carbanion
A carbanion is an anion in which carbon has an unshared pair of electrons and bears a negative charge usually with three substituents for a total of eight valence electrons. The carbanion exists in a trigonal pyramidal geometry. Formally a carbanion is the conjugate base of a carbon acid.where B...
s derived from malonate
Malonic ester synthesis
The malonic ester synthesis is a chemical reaction where diethyl malonate or another ester of malonic acid is alkylated at the carbon alpha to both carbonyl groups, and then converted to a substituted acetic acid. The major drawback of malonic ester synthesis is that the alkylation stage can also...
s or with amine
Amine
Amines are organic compounds and functional groups that contain a basic nitrogen atom with a lone pair. Amines are derivatives of ammonia, wherein one or more hydrogen atoms have been replaced by a substituent such as an alkyl or aryl group. Important amines include amino acids, biogenic amines,...
s in allylic amination as depicted below

Zerovalent Pd(0) compounds such as tris(dibenzylideneacetone)dipalladium(0)
Tris(dibenzylideneacetone)dipalladium(0)
Trisdipalladium or Pd23 is an organometallic complex based on palladium and dibenzylideneacetone used in organic chemistry. It was discovered in 1970.-Preparation and structure:...
and tetrakis(triphenylphosphine)palladium(0)
Tetrakis(triphenylphosphine)palladium(0)
Tetrakispalladium is the chemical compound Pd[P3]4, often abbreviated Pd4, or even PdP4. It is a bright yellow crystalline solid that becomes brown upon decomposition in air.-Structure and properties:...
react with halocarbon
Halocarbon
Halocarbon compounds are chemicals in which one or more carbon atoms are linked by covalent bonds with one or more halogen atoms resulting in the formation of organofluorine compounds, organochlorine compounds, organobromine compounds, and organoiodine compounds...
R-X in oxidative addition
Oxidative addition
Oxidative addition and reductive elimination are two important and related classes of reactions in organometallic chemistry. Oxidative addition is a process that increases both the oxidation state and coordination number of a metal centre...
to R-Pd-X intermediates with covalent
Covalent bond
A covalent bond is a form of chemical bonding that is characterized by the sharing of pairs of electrons between atoms. The stable balance of attractive and repulsive forces between atoms when they share electrons is known as covalent bonding....
Pd-C bonds. This chemistry forms the basis of a large class of organic reactions called coupling reaction
Coupling reaction
A coupling reaction in organic chemistry is a catch-all term for a variety of reactions where two hydrocarbon fragments are coupled with the aid of a metal catalyst...
s (see palladium-catalyzed coupling reactions
Palladium-catalyzed coupling reactions
Palladium compounds are used as a catalyst in many coupling reactions, usually as a homogeneous catalyst. Examples include:* Heck reaction between alkenes and aryl halides* Suzuki reaction between aryl halides and boronic acids...
). An example is the Sonogashira reaction
Sonogashira coupling
In organic chemistry, a Sonogashira coupling is a coupling reaction of terminal alkynes with aryl or vinyl halides. This reaction was first reported by Kenkichi Sonogashira and Nobue Hagihara in 1975.-Catalyst:...
:

In the proposed reaction mechanism Pd(II) replaces the carboxylic acid proton while losing a TFA group, carbon dioxide
Carbon dioxide
Carbon dioxide is a naturally occurring chemical compound composed of two oxygen atoms covalently bonded to a single carbon atom...
is lost in a first-order reaction
Rate equation
The rate law or rate equation for a chemical reaction is an equation that links the reaction rate with concentrations or pressures of reactants and constant parameters . To determine the rate equation for a particular system one combines the reaction rate with a mass balance for the system...
and TFA destroys the formed Ar-Pd-TFA complex without Pd changing its oxidation state
Oxidation state
In chemistry, the oxidation state is an indicator of the degree of oxidation of an atom in a chemical compound. The formal oxidation state is the hypothetical charge that an atom would have if all bonds to atoms of different elements were 100% ionic. Oxidation states are typically represented by...
.

The first organopalladium(IV) compound was described in 1986. This complex is Me3Pd(IV)Ibpy with bpy as a bidentate 2,2'-bipyridine
2,2'-Bipyridine
2,2'-Bipyridine is a organic compound with the formula . This colorless solid, commonly abbreviated bipy or bpy , is an important isomer of the bipyridine family. It is a bidentate chelating ligand, forming complexes with many transition metals...
ligand It was synthesized by reaction of methyl iodide with Me2Pd(II)bpy.

Palladium compounds owe their reactivity to the ease of interconversion between Pd(0) and palladium(II) intermediates. There is no conclusive evidence however for the involvement of Pd(II) to Pd(IV) conversions in palladium mediated organometallic reactions. One reaction invoking such mechanism was described in 2000 and concerned a Heck reaction
Heck reaction
The Heck reaction is the chemical reaction of an unsaturated halide with an alkene and a base and palladium catalyst to form a substituted alkene. Together with the other palladium-catalyzed cross-coupling reactions, this reaction is of great importance, as it allows one to do substitution...
. This reaction was accompanied by a 1,5-hydrogen shift in the presence of amines :

The hydride shift was envisaged as taking place through a Pd(IV) metallacycle:

In related work the intermediate associated with the hydride shift remains Pd(II) :

and in other work (a novel synthesis of indole
Indole
Indole is an aromatic heterocyclic organic compound. It has a bicyclic structure, consisting of a six-membered benzene ring fused to a five-membered nitrogen-containing pyrrole ring. Indole is a popular component of fragrances and the precursor to many pharmaceuticals. Compounds that contain an...
s with two Pd migrations) equilibria
Chemical equilibrium
In a chemical reaction, chemical equilibrium is the state in which the concentrations of the reactants and products have not yet changed with time. It occurs only in reversible reactions, and not in irreversible reactions. Usually, this state results when the forward reaction proceeds at the same...
are postulated between different palladacycles : 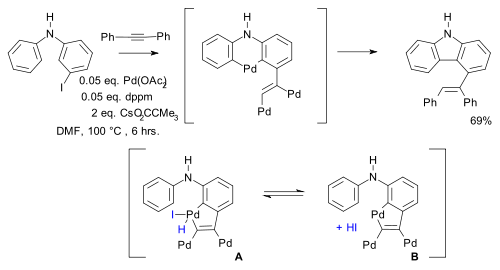 and in certain intramolecular couplings synthetic value was demonstrated regardless of oxidation state :