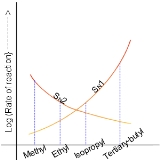 Encyclopedia
In organic
Organic chemistry
Organic chemistry is a subdiscipline within chemistry involving the scientific study of the structure, properties, composition, reactions, and preparation of carbon-based compounds, hydrocarbons, and their derivatives...
and inorganic chemistry
Inorganic chemistry
Inorganic chemistry is the branch of chemistry concerned with the properties and behavior of inorganic compounds. This field covers all chemical compounds except the myriad organic compounds , which are the subjects of organic chemistry...
, nucleophilic substitution is a fundamental class of reactions in which an electron nucleophile
Nucleophile
A nucleophile is a species that donates an electron-pair to an electrophile to form a chemical bond in a reaction. All molecules or ions with a free pair of electrons can act as nucleophiles. Because nucleophiles donate electrons, they are by definition Lewis bases.Nucleophilic describes the...
selectively bonds with or attacks the positive or partially positive charge of an atom or a group of atoms called the leaving group
Leaving group
In chemistry, a leaving group is a molecular fragment that departs with a pair of electrons in heterolytic bond cleavage. Leaving groups can be anions or neutral molecules. Common anionic leaving groups are halides such as Cl−, Br−, and I−, and sulfonate esters, such as para-toluenesulfonate...
; the positive or partially positive atom is referred to as an electrophile
Electrophile
In general electrophiles are positively charged species that are attracted to an electron rich centre. In chemistry, an electrophile is a reagent attracted to electrons that participates in a chemical reaction by accepting an electron pair in order to bond to a nucleophile...
.

The most general form for the reaction may be given as

Nucleophilic substitution reactions are commonplace in organic chemistry, and they can be broadly categorised as taking place at a saturated
Saturation (chemistry)
In chemistry, saturation has six different meanings, all based on reaching a maximum capacity...
aliphatic carbon or at (less often) a saturated aromatic or other unsaturated carbon centre. 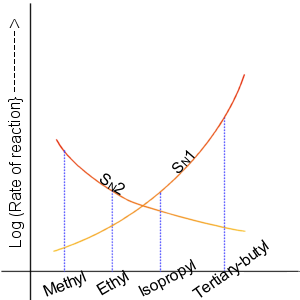 In 1935, Edward D. Hughes and Sir Christopher Ingold
Christopher Kelk Ingold
Sir Christopher Kelk Ingold FRS was a British chemist based in Leeds and London. His groundbreaking work in the 1920s and 1930s on reaction mechanisms and the electronic structure of organic compounds was responsible for the introduction into mainstream chemistry of concepts such as nucleophile,...
studied nucleophilic substitution reactions of alkyl halides and related compounds. They proposed that there were two main mechanisms at work, both of them competing with each other. The two main mechanisms are the SN1 reaction
SN1 reaction
The SN1 reaction is a substitution reaction in organic chemistry. "SN" stands for nucleophilic substitution and the "1" represents the fact that the rate-determining step is unimolecular...
and the SN2 reaction
SN2 reaction
The SN2 reaction is a type of nucleophilic substitution, where a lone pair from a nucleophile attacks an electron deficient electrophilic center and bonds to it, expelling another group called a leaving group. Thus the incoming group replaces the leaving group in one step...
. S stands for chemical substitution, N stands for nucleophilic, and the number represents the kinetic order of the reaction.

In the SN2 reaction, the addition of the nucleophile and the elimination of leaving group take place simultaneously. SN2 occurs where the central carbon atom is easily accessible to the nucleophile. By contrast the SN1 reaction involves two steps. SN1 reactions tend to be important when the central carbon atom of the substrate is surrounded by bulky groups, both because such groups interfere sterically with the SN2 reaction (discussed above) and because a highly substituted carbon forms a stable carbocation
Carbocation
A carbocation is an ion with a positively-charged carbon atom. The charged carbon atom in a carbocation is a "sextet", i.e. it has only six electrons in its outer valence shell instead of the eight valence electrons that ensures maximum stability . Therefore carbocations are often reactive,...
.

An example of a substitution reaction taking place by a so-called borderline mechanism as originally studied by Hughes and Ingold is the reaction of 1-phenylethyl chloride with sodium methoxide
Sodium methoxide
Sodium methoxide is a chemical compound, with formula CH3ONa. This colourless solid, which is formed by the deprotonation of methanol, is a widely used reagent in industry and the laboratory...
in methanol.
The reaction rate
Reaction rate
The reaction rate or speed of reaction for a reactant or product in a particular reaction is intuitively defined as how fast or slow a reaction takes place...
is found to the sum of SN1 and SN2 components with 61% (3,5 M , 70°C) taking place by the latter.

There are many reactions in organic chemistry that involve this type of mechanism. Common examples include

R-X  → R-H
Alkane
Alkanes are chemical compounds that consist only of hydrogen and carbon atoms and are bonded exclusively by single bonds without any cycles...
using LiAlH4
Lithium aluminium hydride
Lithium aluminium hydride, commonly abbreviated to LAH or known as LithAl, is an inorganic compound with the chemical formula LiAlH4. It was discovered by Finholt, Bond and Schlesinger in 1947. This compound is used as a reducing agent in organic synthesis, especially for the reduction of esters,...
(SN2)
R-Br + OH− → R-OH
Alcohol
In chemistry, an alcohol is an organic compound in which the hydroxy functional group is bound to a carbon atom. In particular, this carbon center should be saturated, having single bonds to three other atoms....
+ Br−
Bromide
A bromide is a chemical compound containing bromide ion, that is bromine atom with effective charge of −1. The class name can include ionic compounds such as caesium bromide or covalent compounds such as sulfur dibromide.-Natural occurrence:...
(SN2) or
R-Br + H2O → R-OH + HBr
Hydrobromic acid
Hydrobromic acid is a strong acid formed by dissolving the diatomic molecule hydrogen bromide in water. "Constant boiling" hydrobromic acid is an aqueous solution that distills at 124.3 °C and contains 47.6% HBr by weight, which is 8.89 mol/L. Hydrobromic acid has a pKa of −9, making it a...
(SN1)
R-Br + OR'−
Alkoxide
An alkoxide is the conjugate base of an alcohol and therefore consists of an organic group bonded to a negatively charged oxygen atom. They can be written as RO−, where R is the organic substituent. Alkoxides are strong bases and, when R is not bulky, good nucleophiles and good ligands...
→ R-OR'
Ether
Ethers are a class of organic compounds that contain an ether group — an oxygen atom connected to two alkyl or aryl groups — of general formula R–O–R'. A typical example is the solvent and anesthetic diethyl ether, commonly referred to simply as "ether"...
+ Br−   (SN2)

Besides SN1 and SN2, other mechanisms are known, although they are less common. The SNi
SNi
SNi or Substitution Nucleophilic internal stands for a specific but not often encountered nucleophilic aliphatic substitution reaction mechanism. The name was introduced by Cowdrey et al...
mechanism is observed in reactions of thionyl chloride
Thionyl chloride
Thionyl chloride is an inorganic compound with the formula SOCl2. It is a reactive chemical reagent used in chlorination reactions. It is a colorless, distillable liquid at room temperature and pressure that decomposes above 140 °C. Thionyl chloride is sometimes confused with sulfuryl...
with alcohol
Alcohol
In chemistry, an alcohol is an organic compound in which the hydroxy functional group is bound to a carbon atom. In particular, this carbon center should be saturated, having single bonds to three other atoms....
s, and it is similar to SN1 except that the nucleophile is delivered from the same side as the leaving group.

Nucleophilic substitutions can be accompanied by an allylic rearrangement
Allylic rearrangement
An allylic rearrangement or allylic shift is an organic reaction in which the double bond in an allyl chemical compound shifts to the next carbon atom. It is encountered in nucleophilic substitution....
as seen in reactions such as the Ferrier rearrangement
Ferrier rearrangement
The Ferrier rearrangement is an organic reaction that involves a nucleophilic substitution reaction combined with an allylic shift in a glycal . It was discovered by the carbohydrate chemist Robert J...
. This type of mechanism is called an SN1' or SN2' reaction (depending on the kinetics). With allyl
Allyl
An allyl group is a substituent with the structural formula H2C=CH-CH2R, where R is the connection to the rest of the molecule. It is made up of a methylene , attached to a vinyl group . The name is derived from the Latin word for garlic, Allium sativum. Theodor Wertheim isolated an allyl...
ic halides or sulphonates, for example, the nucleophile may attack at the γ unsaturated carbon in place of the carbon bearing the leaving group. This may be seen in the reaction of 1-chloro-2-butene with sodium hydroxide to give a mixture of 2-buten-1-ol and 1-buten-3-ol: