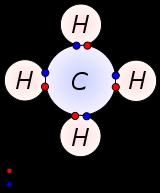 Overview
A covalent bond is a form of chemical bond
Chemical bond
A chemical bond is an attraction between atoms that allows the formation of chemical substances that contain two or more atoms. The bond is caused by the electromagnetic force attraction between opposite charges, either between electrons and nuclei, or as the result of a dipole attraction...
ing that is characterized by the sharing of pairs of electron
Electron
The electron is a subatomic particle with a negative elementary electric charge. It has no known components or substructure; in other words, it is generally thought to be an elementary particle. An electron has a mass that is approximately 1/1836 that of the proton...
s between atom
Atom
The atom is a basic unit of matter that consists of a dense central nucleus surrounded by a cloud of negatively charged electrons. The atomic nucleus contains a mix of positively charged protons and electrically neutral neutrons...
s. The stable balance of attractive and repulsive forces between atoms when they share electrons is known as covalent bonding.

Covalent bonding includes many kinds of interaction, including σ-bonding
Sigma bond
In chemistry, sigma bonds are the strongest type of covalent chemical bond. They are formed by head-on overlapping between atomic orbitals. Sigma bonding is most clearly defined for diatomic molecules using the language and tools of symmetry groups. In this formal approach, a σ-bond is...
, π-bonding
Pi bond
In chemistry, pi bonds are covalent chemical bonds where two lobes of one involved atomic orbital overlap two lobes of the other involved atomic orbital...
, metal-to-metal bonding, agostic interactions, and three-center two-electron bond
Three-center two-electron bond
A three-center two-electron bond is an electron-deficient chemical bond where three atoms share two electrons. The combination of three atomic orbitals form three molecular orbitals: one bonding, one non-bonding, and one anti-bonding. The two electrons go into the bonding orbital, resulting in a...
s. The term covalent bond dates from 1939.

draw a diagram to show the arrangment of the valency electrons in the covalent compound chloromethane.
More
x