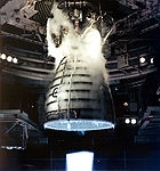 Overview
Hydrogen is the chemical element
Chemical element
A chemical element is a pure chemical substance consisting of one type of atom distinguished by its atomic number, which is the number of protons in its nucleus. Familiar examples of elements include carbon, oxygen, aluminum, iron, copper, gold, mercury, and lead.As of November 2011, 118 elements...
with atomic number
Atomic number
In chemistry and physics, the atomic number is the number of protons found in the nucleus of an atom and therefore identical to the charge number of the nucleus. It is conventionally represented by the symbol Z. The atomic number uniquely identifies a chemical element...
1. It is represented by the symbol
Chemical symbol
A chemical symbol is a 1- or 2-letter internationally agreed code for a chemical element, usually derived from the name of the element, often in Latin. Only the first letter is capitalised...
H. With an average atomic weight
Atomic weight
Atomic weight is a dimensionless physical quantity, the ratio of the average mass of atoms of an element to 1/12 of the mass of an atom of carbon-12...
of ( for Hydrogen-1), hydrogen is the lightest and most abundant
Abundance of the chemical elements
The abundance of a chemical element measures how relatively common the element is, or how much of the element is present in a given environment by comparison to all other elements...
chemical element, constituting roughly 75% of the Universe's chemical elemental mass. Star
Star
A star is a massive, luminous sphere of plasma held together by gravity. At the end of its lifetime, a star can also contain a proportion of degenerate matter. The nearest star to Earth is the Sun, which is the source of most of the energy on Earth...
s in the main sequence
Main sequence
The main sequence is a continuous and distinctive band of stars that appears on plots of stellar color versus brightness. These color-magnitude plots are known as Hertzsprung–Russell diagrams after their co-developers, Ejnar Hertzsprung and Henry Norris Russell...
are mainly composed of hydrogen in its plasma
Plasma (physics)
In physics and chemistry, plasma is a state of matter similar to gas in which a certain portion of the particles are ionized. Heating a gas may ionize its molecules or atoms , thus turning it into a plasma, which contains charged particles: positive ions and negative electrons or ions...
state. Naturally occurring elemental hydrogen is relatively rare on Earth.

The most common isotope
Isotope
Isotopes are variants of atoms of a particular chemical element, which have differing numbers of neutrons. Atoms of a particular element by definition must contain the same number of protons but may have a distinct number of neutrons which differs from atom to atom, without changing the designation...
of hydrogen is protium (name rarely used, symbol 1H) with a single proton
Proton
The proton is a subatomic particle with the symbol or and a positive electric charge of 1 elementary charge. One or more protons are present in the nucleus of each atom, along with neutrons. The number of protons in each atom is its atomic number....
and no neutron
Neutron
The neutron is a subatomic hadron particle which has the symbol or , no net electric charge and a mass slightly larger than that of a proton. With the exception of hydrogen, nuclei of atoms consist of protons and neutrons, which are therefore collectively referred to as nucleons. The number of...
s.

How does Hydrogen behave below its triple point?

why is it deemed unsafe to use Teflon Tape sealing systems in high or low pressure hydrogen piping.

Where can we buy these green algae? I would like to do an experiment on Green Algae and how it produces Hydrogen? Are there any special condition un...
More
x