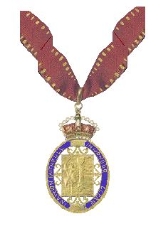 Order of the Companions of Honour
Topic Home
Discussion
0 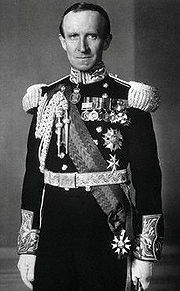 The Order of the Companions of Honour is an order
Order (decoration)
An order or order of merit is a visible honour, awarded by a government, dynastic house or international organization to an individual, usually in recognition of distinguished service to a nation or to humanity. The distinction between orders and decorations is somewhat vague, except that most...
of the Commonwealth realm
Commonwealth Realm
A Commonwealth realm is a sovereign state within the Commonwealth of Nations that has Elizabeth II as its monarch and head of state. The sixteen current realms have a combined land area of 18.8 million km² , and a population of 134 million, of which all, except about two million, live in the six...
s. It was founded by King George V
George V of the United Kingdom
George V was King of the United Kingdom and the British Dominions, and Emperor of India, from 6 May 1910 through the First World War until his death in 1936....
in June 1917, as a reward for outstanding achievements in the arts
ARts
aRts, which stands for analog Real time synthesizer, is an audio framework that is no longer under development. It is best known for previously being used in KDE to simulate an analog synthesizer....
, literature
Literature
Literature is the art of written works, and is not bound to published sources...
, music
Music
Music is an art form whose medium is sound and silence. Its common elements are pitch , rhythm , dynamics, and the sonic qualities of timbre and texture...
, science
Science
Science is a systematic enterprise that builds and organizes knowledge in the form of testable explanations and predictions about the universe...
, politics
Politics
Politics is a process by which groups of people make collective decisions. The term is generally applied to the art or science of running governmental or state affairs, including behavior within civil governments, but also applies to institutions, fields, and special interest groups such as the...
, industry
Industry
Industry refers to the production of an economic good or service within an economy.-Industrial sectors:There are four key industrial economic sectors: the primary sector, largely raw material extraction industries such as mining and farming; the secondary sector, involving refining, construction,...
or religion
Religion
Religion is a collection of cultural systems, belief systems, and worldviews that establishes symbols that relate humanity to spirituality and, sometimes, to moral values. Many religions have narratives, symbols, traditions and sacred histories that are intended to give meaning to life or to...
.

The order consists of the sovereign, plus no more than 65 Companions of Honour with, originally, a quota of 45 members for the United Kingdom
United Kingdom
The United Kingdom of Great Britain and Northern IrelandIn the United Kingdom and Dependencies, other languages have been officially recognised as legitimate autochthonous languages under the European Charter for Regional or Minority Languages...
, 7 for Australia
Australia
Australia , officially the Commonwealth of Australia, is a country in the Southern Hemisphere comprising the mainland of the Australian continent, the island of Tasmania, and numerous smaller islands in the Indian and Pacific Oceans. It is the world's sixth-largest country by total area...
, 2 for New Zealand
New Zealand
New Zealand is an island country in the south-western Pacific Ocean comprising two main landmasses and numerous smaller islands. The country is situated some east of Australia across the Tasman Sea, and roughly south of the Pacific island nations of New Caledonia, Fiji, and Tonga...
and 11 for other Commonwealth realms. It has not been awarded in Australia since 1981, where it has been displaced by the Order of Australia
Order of Australia
The Order of Australia is an order of chivalry established on 14 February 1975 by Elizabeth II, Queen of Australia, "for the purpose of according recognition to Australian citizens and other persons for achievement or for meritorious service"...
. Additionally, foreigners from outside the realm may be added as "honorary members". Membership of the order confers no title
Title
A title is a prefix or suffix added to someone's name to signify either veneration, an official position or a professional or academic qualification. In some languages, titles may even be inserted between a first and last name...
, or precedence
Precedence
Precedence may refer to:* Message precedence of military communications traffic* Order of precedence, the ceremonial hierarchy within a nation or state* Order of operations, in mathematics and computer programming...
, but recipients of this one-class order are entitled to use the post-nominal letters
Post-nominal letters
Post-nominal letters, also called post-nominal initials, post-nominal titles or designatory letters, are letters placed after the name of a person to indicate that the individual holds a position, educational degree, accreditation, office, or honour. An individual may use several different sets of...
"CH".

The insignia of the Order consists of an oval medallion with an oak tree, a shield with the royal arms
Royal coat of arms of the United Kingdom
The Royal coat of arms of the United Kingdom is the official coat of arms of the British monarch, currently Queen Elizabeth II. These arms are used by the Queen in her official capacity as monarch of the United Kingdom, and are officially known as her Arms of Dominion...
hanging from one branch, and on the left a mounted knight
Knight
A knight was a member of a class of lower nobility in the High Middle Ages.By the Late Middle Ages, the rank had become associated with the ideals of chivalry, a code of conduct for the perfect courtly Christian warrior....
in armour. The badge's clear blue border bears the motto IN ACTION FAITHFUL AND IN HONOUR CLEAR (Alexander Pope
Alexander Pope
Alexander Pope was an 18th-century English poet, best known for his satirical verse and for his translation of Homer. He is the third-most frequently quoted writer in The Oxford Dictionary of Quotations, after Shakespeare and Tennyson...
's description (in iambic pentameter
Iambic pentameter
Iambic pentameter is a commonly used metrical line in traditional verse and verse drama. The term describes the particular rhythm that the words establish in that line. That rhythm is measured in small groups of syllables; these small groups of syllables are called "feet"...
) in his Epistle to Mr Addison of James Craggs
James Craggs the Younger
James Craggs the Younger , son of James Craggs the Elder, was born at Westminster. Part of his early life was spent abroad, where he made the acquaintance of George Louis, Elector of Hanover, afterwards King George I...
, later used on Craggs' monument in Westminster Abbey
Westminster Abbey
The Collegiate Church of St Peter at Westminster, popularly known as Westminster Abbey, is a large, mainly Gothic church, in the City of Westminster, London, United Kingdom, located just to the west of the Palace of Westminster. It is the traditional place of coronation and burial site for English,...
) in gold letters, and the oval is surmounted by an imperial crown
Crown (headgear)
A crown is the traditional symbolic form of headgear worn by a monarch or by a deity, for whom the crown traditionally represents power, legitimacy, immortality, righteousness, victory, triumph, resurrection, honour and glory of life after death. In art, the crown may be shown being offered to...
. Men wear the badge on a ribbon (red with golden border threads) around their necks, and women on a bow at the left shoulder.