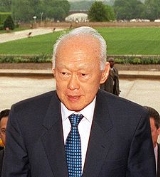 As the co-founder and first secretary-general of the People's Action Party
People's Action Party
The People's Action Party is the leading political party in Singapore. It has been the city-state's ruling political party since 1959....
(PAP), he led the party to eight victories from 1959 to 1990, and oversaw the separation of Singapore from Malaysia in 1965 and its subsequent transformation from a relatively underdeveloped colonial outpost with no natural resources into a "First World
First World
The concept of the First World first originated during the Cold War, where it was used to describe countries that were aligned with the United States. These countries were democratic and capitalistic. After the fall of the Soviet Union and the end of the Cold War, the term "First World" took on a...
" Asian Tiger.

"If we say that we believe in democracy, if we say that the fabric of a democratic society is one which allows for the free play of idea...then, in the name of all the gods, give that free play a chance to work within the constitutional framework." - Opposition leader Lee Kuan Yew, Singapore Legislative Assembly, Oct 4, 1956

"Repression can only go up to a point. When it becomes too acute, the instruments of repression, namely the army and the police, have been proved time and time again in history to have turned their guns on their masters." - Opposition leader Lee Kuan Yew, Straits Times, May 5, 1959

"I pointed to an article with bold headlines reporting that the police had refused to allow the PAP to hold a rally at Empress Place, and then to the last paragraph where in small type it added the meeting would take place where we were now. I compared this with a prominent report about an SPA rally. This was flagrant bias." - Complaining about the Straits Times in 1959.

"If I were in authority in Singapore indefinitely without having to ask those who are governed whether they like what is being done, then I would not have the slightest doubt that I could govern much more effectively in their interests." - Mr Lee Kuan Yew, 1962