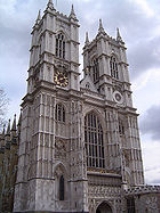 Overview
The Collegiate Church of St Peter at Westminster, popularly known as Westminster Abbey, is a large, mainly Gothic
Gothic architecture
Gothic architecture is a style of architecture that flourished during the high and late medieval period. It evolved from Romanesque architecture and was succeeded by Renaissance architecture....
church, in the City of Westminster
City of Westminster
The City of Westminster is a London borough occupying much of the central area of London, England, including most of the West End. It is located to the west of and adjoining the ancient City of London, directly to the east of the Royal Borough of Kensington and Chelsea, and its southern boundary...
, London
London
London is the capital city of :England and the :United Kingdom, the largest metropolitan area in the United Kingdom, and the largest urban zone in the European Union by most measures. Located on the River Thames, London has been a major settlement for two millennia, its history going back to its...
, United Kingdom
United Kingdom
The United Kingdom of Great Britain and Northern IrelandIn the United Kingdom and Dependencies, other languages have been officially recognised as legitimate autochthonous languages under the European Charter for Regional or Minority Languages...
, located just to the west of the Palace of Westminster
Palace of Westminster
The Palace of Westminster, also known as the Houses of Parliament or Westminster Palace, is the meeting place of the two houses of the Parliament of the United Kingdom—the House of Lords and the House of Commons...
. It is the traditional place of coronation
Coronation of the British monarch
The coronation of the British monarch is a ceremony in which the monarch of the United Kingdom is formally crowned and invested with regalia...
and burial site for English, later British and later still (and currently) monarchs of the Commonwealth realm
Commonwealth Realm
A Commonwealth realm is a sovereign state within the Commonwealth of Nations that has Elizabeth II as its monarch and head of state. The sixteen current realms have a combined land area of 18.8 million km² , and a population of 134 million, of which all, except about two million, live in the six...
s. The abbey is a Royal Peculiar
Royal Peculiar
A Royal Peculiar is a place of worship that falls directly under the jurisdiction of the British monarch, rather than under a bishop. The concept dates from Anglo-Saxon times, when a church could ally itself with the monarch and therefore not be subject to the bishop of the area...
and briefly held the status of a cathedral
Cathedral
A cathedral is a Christian church that contains the seat of a bishop...
from 1540 to 1550.

Westminster Abbey is a collegiate church
Collegiate church
In Christianity, a collegiate church is a church where the daily office of worship is maintained by a college of canons; a non-monastic, or "secular" community of clergy, organised as a self-governing corporate body, which may be presided over by a dean or provost...
governed by the Dean and Chapter of Westminster
Dean and Canons of Westminster
The Dean and Canons of Westminster are the ecclesiastical body of Westminster Abbey, a collegiate church of the Church of England and royal peculiar in Westminster, England. They meet in Chapter and are also known as the Dean and Chapter of Westminster....
, as established by Royal charter
Royal Charter
A royal charter is a formal document issued by a monarch as letters patent, granting a right or power to an individual or a body corporate. They were, and are still, used to establish significant organizations such as cities or universities. Charters should be distinguished from warrants and...
of Queen Elizabeth I in 1560, which created it as the Collegiate Church of St Peter Westminster and a Royal Peculiar under the personal jurisdiction of the Sovereign.

Did Westminister Abbey recieve damage from the bombing of London during WW II ?

What is a function

What shakespeare play is buried in Westminster Abbey
More

1066    William the Conqueror is crowned king of England, at Westminster Abbey, London.

1100    Henry I is crowned King of England in Westminster Abbey.

1154    Henry II of England is crowned at Westminster Abbey.

1547    Edward VI of England is crowned King of England at Westminster Abbey.

1661    King Charles II of England, Scotland and Ireland is crowned in Westminster Abbey.

1950    The Stone of Scone, traditional coronation stone of British monarchs, is taken from Westminster Abbey by Scottish nationalist students. It later turns up in Scotland on April 11, 1951.