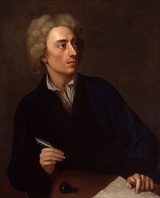 Overview
Alexander Pope was an 18th-century English poet, best known for his satirical verse and for his translation of Homer
Homer
In the Western classical tradition Homer , is the author of the Iliad and the Odyssey, and is revered as the greatest ancient Greek epic poet. These epics lie at the beginning of the Western canon of literature, and have had an enormous influence on the history of literature.When he lived is...
. He is the third-most frequently quoted writer in The Oxford Dictionary of Quotations, after Shakespeare
William Shakespeare
William Shakespeare was an English poet and playwright, widely regarded as the greatest writer in the English language and the world's pre-eminent dramatist. He is often called England's national poet and the "Bard of Avon"...
and Tennyson. Pope is famous for his use of the heroic couplet
Heroic couplet
A heroic couplet is a traditional form for English poetry, commonly used for epic and narrative poetry; it refers to poems constructed from a sequence of rhyming pairs of iambic pentameter lines. The rhyme is always masculine. Use of the heroic couplet was first pioneered by Geoffrey Chaucer in...
.
Pope was born to Alexander Pope Senior (1646–1717), a linen merchant of Plough Court, Lombard Street, London, and his wife Edith (née Turner) (1643–1733), who were both Catholics.

Pope's understanding of 'the chain of being' and the order of the cosmos and what he understands as the purpose of religion and man's relation to God,...

What was Pope's reasons for dedicating the An Essay on Man to Henry St. John, Lord Bolingbroke?

Pope and the society

Pope'a approach to the society

My teacher told that Rape of Lock by Pope has a meaning of rape of a person becoz lock of hair is found not only in head but also in private parts of ...

What are the literary techniques he uses in the poem solitude?
More

Happy the man whose wish and care A few paternal acres bound, Content to breathe his native air In his own ground.

Thus let me live, unseen, unknown; Thus unlamented let me die; Steal from the world, and not a stone Tell where I lie.

They dream in Courtship, but in Wedlock wake.

The mouse that always trusts to one poor hole Can never be a mouse of any soul.

"The Wife of Bath her Prologue, from Chaucer" (c.1704, published 1713), lines 298-299. Compare: "I hold a mouses wit not worth a leke, That hath but on hole for to sterten to", Geoffrey Chaucer, Canterbury Tales, "The Wif of Bathes Prologue", line 6154; "The mouse that hath but one hole is quickly taken", George Herbert, Jacula Prudentum.

Histories are more full of Examples of the Fidelity of dogs than of Friends.

I am his Highness' dog at Kew; Pray tell me, sir, whose dog are you?

"On the Collar of a Dog"

Nature and Nature's laws lay hid in night: God said, "Let Newton be!" and all was light.

The flying Rumours gather'd as they roll'd, Scarce any Tale was sooner heard than told; And all who told it, added something new, And all who heard it, made Enlargements too, In ev'ry Ear it spread, on ev'ry Tongue it grew.

Nor Fame I slight, nor her favors call; She comes unlooked for, if she comes at all.