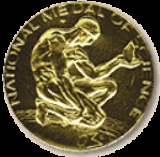 On January 7, 1979, the American Association for the Advancement of Science
American Association for the Advancement of Science
The American Association for the Advancement of Science is an international non-profit organization with the stated goals of promoting cooperation among scientists, defending scientific freedom, encouraging scientific responsibility, and supporting scientific education and science outreach for the...
(AAAS) passed a resolution proposing that the medal be expanded to include the social and behavioral sciences. In response, Senator Ted Kennedy
Ted Kennedy
Edward Moore "Ted" Kennedy was a United States Senator from Massachusetts and a member of the Democratic Party. Serving almost 47 years, he was the second most senior member of the Senate when he died and is the fourth-longest-serving senator in United States history...
introduced the Science and Technology Equal Opportunities Act into the Senate
United States Senate
The United States Senate is the upper house of the bicameral legislature of the United States, and together with the United States House of Representatives comprises the United States Congress. The composition and powers of the Senate are established in Article One of the U.S. Constitution. Each...
on March 7, 1979, expanding the medal to include these scientific disciplines as well. President Jimmy Carter's
Jimmy Carter
James Earl "Jimmy" Carter, Jr. is an American politician who served as the 39th President of the United States and was the recipient of the 2002 Nobel Peace Prize, the only U.S. President to have received the Prize after leaving office...
signature enacted this change as Public Law 96-516 on December 12, 1980.

The first National Medal of Science was awarded on February 18, 1963, for the year 1962 by President John F. Kennedy to Theodore von Kármán
Theodore von Karman
Theodore von Kármán was a Hungarian-American mathematician, aerospace engineer and physicist who was active primarily in the fields of aeronautics and astronautics. He is responsible for many key advances in aerodynamics, notably his work on supersonic and hypersonic airflow characterization...
for his work at the Caltech Jet Propulsion Laboratory
Jet Propulsion Laboratory
Jet Propulsion Laboratory is a federally funded research and development center and NASA field center located in the San Gabriel Valley area of Los Angeles County, California, United States. The facility is headquartered in the city of Pasadena on the border of La Cañada Flintridge and Pasadena...
. The citation accompanying von Kármán's award reads:

The award's ceremony is organized by the Office of Science and Technlogy Policy and takes place at the White House
White House
The White House is the official residence and principal workplace of the president of the United States. Located at 1600 Pennsylvania Avenue NW in Washington, D.C., the house was designed by Irish-born James Hoban, and built between 1792 and 1800 of white-painted Aquia sandstone in the Neoclassical...
.

Each year the National Science Foundation sends out a call to the scientific community for the nomination of new candidates for the National Medal of Science. Individuals are nominated by their peers with each nomination requiring three letters of support from individuals in science and technology. Nominations are then sent to the Committee of the National Medal of Science which is a board composed of fourteen presidential appointees comprising twelve scientists, and two ex officio members - the director of the Office of Science and Technology Policy
Office of Science and Technology Policy
The Office of Science and Technology Policy is an office in the Executive Office of the President , established by Congress on May 11, 1976, with a broad mandate to advise the President on the effects of science and technology on domestic and international affairs.The director of this office is...
(OSTP) and the president of the National Academy of Sciences
United States National Academy of Sciences
The National Academy of Sciences is a corporation in the United States whose members serve pro bono as "advisers to the nation on science, engineering, and medicine." As a national academy, new members of the organization are elected annually by current members, based on their distinguished and...
(NAS).

According to the Committee, successful candidates must be U.S. citizens or permanent residents who are applying for U.S. citizenship, who have done work of significantly outstanding merit or that has had a major impact on scientific thought in their field. The Committee also values those who promote the general advancement of science and individuals who have influenced science education, although these traits are less important than groundbreaking or thought-provoking research. The nomination of a candidate is effective for three years; at the end of three years, the candidates peers are allowed to renominate the candidate. The Committee makes their recommendations to the President for the final awarding decision.

The National Medal of Science depicts Man, surrounded by earth, sea, and sky, contemplating and struggling to understand Nature. The crystal in his hand represents the universal order and also suggests the basic unit of living things. The formula being outlined in the sand symbolizes scientific abstraction.