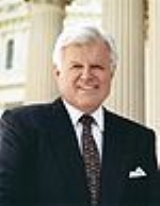 Overview
Edward Moore "Ted" Kennedy (February 22, 1932 August 25, 2009) was a United States Senator
United States Senate
The United States Senate is the upper house of the bicameral legislature of the United States, and together with the United States House of Representatives comprises the United States Congress. The composition and powers of the Senate are established in Article One of the U.S. Constitution. Each...
from Massachusetts
Massachusetts
The Commonwealth of Massachusetts is a state in the New England region of the northeastern United States of America. It is bordered by Rhode Island and Connecticut to the south, New York to the west, and Vermont and New Hampshire to the north; at its east lies the Atlantic Ocean. As of the 2010...
and a member of the Democratic Party
Democratic Party (United States)
The Democratic Party is one of two major contemporary political parties in the United States, along with the Republican Party. The party's socially liberal and progressive platform is largely considered center-left in the U.S. political spectrum. The party has the lengthiest record of continuous...
. Serving almost 47 years, he was the second most senior member of the Senate when he died and is the fourth-longest-serving senator in United States history. For many years the most prominent living member of the Kennedy family
Kennedy family
In the United States, the phrase Kennedy family commonly refers to the family descending from the marriage of the Irish-Americans Joseph P. Kennedy, Sr. and Rose Elizabeth Fitzgerald that was prominent in American politics and government. Their political involvement has revolved around the...
, he was the last surviving son of Joseph P. Kennedy, Sr.
Joseph P. Kennedy, Sr.
Joseph Patrick "Joe" Kennedy, Sr. was a prominent American businessman, investor, and government official....
; the youngest brother of President John F. Kennedy
John F. Kennedy
John Fitzgerald "Jack" Kennedy , often referred to by his initials JFK, was the 35th President of the United States, serving from 1961 until his assassination in 1963....
and Senator Robert F. Kennedy
Robert F. Kennedy
Robert Francis "Bobby" Kennedy , also referred to by his initials RFK, was an American politician, a Democratic senator from New York, and a noted civil rights activist. An icon of modern American liberalism and member of the Kennedy family, he was a younger brother of President John F...
, both victims of assassination, and Joseph P. Kennedy, Jr.
Joseph P. Kennedy, Jr.
Joseph Patrick "Joe" Kennedy, Jr. was an American bomber pilot during World War II. He was the eldest of nine children born to Joseph Patrick Kennedy, Sr., and Rose Elizabeth Kennedy....
, killed in action in World War II; and the father of Congressman Patrick J. Kennedy
Patrick J. Kennedy
Patrick Joseph Kennedy II is the former U.S. Representative for , serving from 1995 until 2011. He is a member of the Democratic Party. The district includes all of Bristol County and Newport County, and parts of Providence County. Kennedy did not seek re-election in 2010.A member of the Kennedy...
.

If we set the precedent of limiting the First Amendment, in order to protect the sensibilities of those who are offended by flag burning, what will we say the next time someone is offended by some other minority view, or by some other person's exercise of the freedom the Constitution is supposed to protect?

My fellow Democrats, my fellow Americans, it is so wonderful to be here. And nothing — nothing is going to keep me away from this special gathering tonight. I have come here tonight to stand with you to change America, to restore its future, to rise to our best ideals, and to elect Barack Obama president of the United States.

For me this is a season of hope -- new hope for a justice and fair prosperity for the many, and not just for the few — new hope. And this is the cause of my life — new hope that we will break the old gridlock and guarantee that every American — north, south, east, west, young, old — will have decent, quality health care as a fundamental right and not a privilege.

We are told that Barack Obama believes too much in an America of high principle and bold endeavor, but when John F. Kennedy|John Kennedy called of going to the moon, he didn't say, "It's too far to get there. We shouldn't even try." Our people answered his call and rose to the challenge, and today an American flag still marks the surface of the moon.