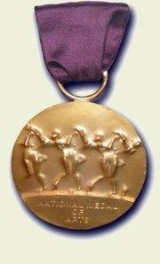 In 1983, prior to the official establishment of the Medal, the following artists and patrons received a medal from President Reagan, arranged by the President's Committee on the Arts and the Humanities: 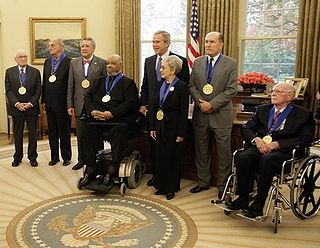 In 1997, poet Adrienne Rich
Adrienne Rich
Adrienne Cecile Rich is an American poet, essayist and feminist. She has been called "one of the most widely read and influential poets of the second half of the 20th century."-Early life:...
refused her award as a protest against “inconsistencies” between art and “the cynical politics” of the Clinton
Bill Clinton
William Jefferson "Bill" Clinton is an American politician who served as the 42nd President of the United States from 1993 to 2001. Inaugurated at age 46, he was the third-youngest president. He took office at the end of the Cold War, and was the first president of the baby boomer generation...
White House administration.